As I’ve mentioned more than a few times, Last weekend was the NOVA Open down in DC (5 minutes from the airport and IN a hotel. Check it out next year!). While I was busy leading most of the time, I attempted to get two games in. The first game on Thursday was a bust, but Saturday night I had some unexpected free time. Anthony from Frozen Kommander was walkin’ around looking for Iron Arena games, so we sat down and got to it!

My list was a variant on the Coven that I’ve been playing for some 15 games now. While I enjoyed the double soulhunter list, I found that it was too often simply picked apart. Models with Def 14 and 14 armor are not in any measurable way hard to kill, so I tossed one unit out the door and put down my Satyxis Raiders.

we rolled up Entrenched, and I was going first. I deployed with the Kraken in the center, Coven to one side, Combine to the other. Necrotech was way back to support the Kraken, and Orin was in between the Egregore and The Kraken. Just in case Butcher got froggy and decided to debuff my models. Each unit was sent to the flanks to try and capitalize on their speed, along with an Arc node to help out. 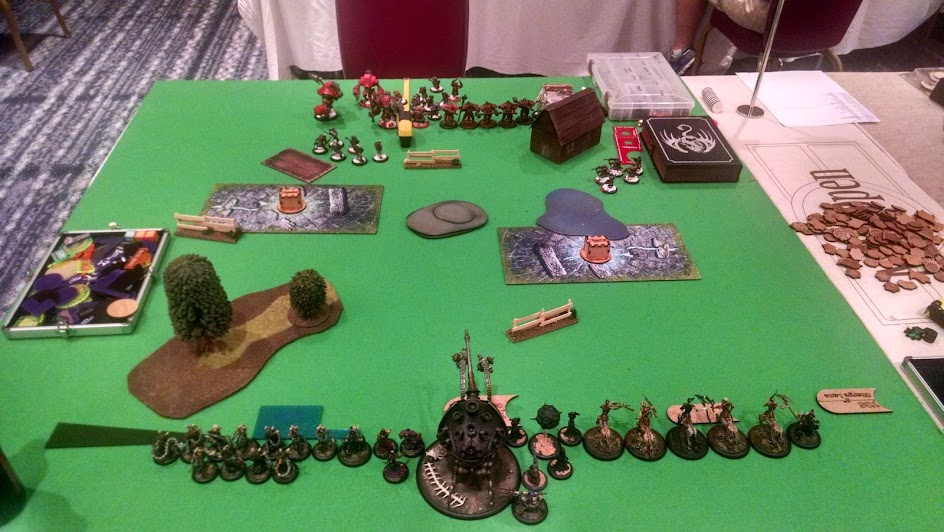 As I mentioned last time, speed is of the essence with the Coven, and while taking out the Soulhunters feels like its slowing down, the Satyxis add bodies as well as speed, making for a near perfect trade out. Against Khador, speed is a double edged sword as getting there is great, but staying there and taking them out would be a little rough.

Nothing particularly exciting happened. I tried to pre-measure quickly and make sure that all my Satyxis were out of range of the Riflemen, but then I remembered I was going to put Occultation on them. An auspicious start to the game! I built a cloud fortress for the soul hunters to hide behind with the Fuel Cache (right?) Objective and a Veil of Mists. Its really solid. The Combine handed out Ghost Walk and Puppet Strings to the Satyxis and the Kraken, respectively. The coven moved up and positioned themselves behind the Concealment wall. The Kraken, emboldened by the conga line of Widowmakers, simply moved up under Iron Agression and lobbed a far shot. As with all first turn shooting, it scattered and went wide. One with my turn and, in my opinion, pretty strongly positioned for a second turn feat, I turned over the non-existant clock. 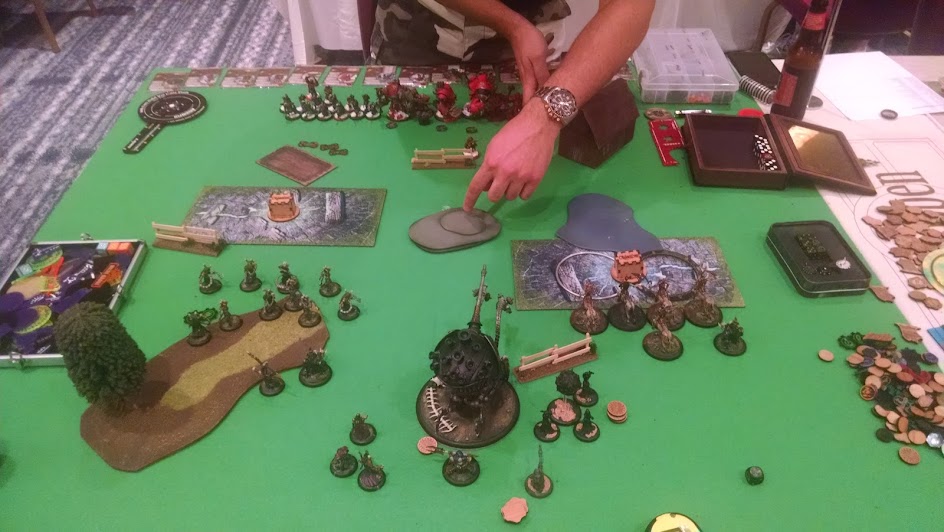 End of Cryx. Round 1

Following in my footsteps, nearly his entire force gets into position for the following turn. the Marksmen is able to tag one of the Soulhunters, but other than that, my army sits just out of threat range, on purpose. Our first turns are pretty uneventful.

Knowing that I had to feat now or lose it, My whole turn was predicated around it. Recently, I’d been taking a ton of time on my feat turn, to the point where I’d loose games going down to time because it ate so much of my turn. I resolved not to go into the tank to far, and get to it.

I upkept Occultation, in case the Rifle corpse, who would likely sit at the edge of my feat, wanted to back up. Kraken kept Infernal Machine. I dropped two additional focus onto the Kraken, and called it a Maintenance Phase.

The Satyxis, still alive thanks to stealth, ran into the zone to start putting pressure. I made sure to be 6″ away so that in order to shoot me at all, he both needed to come forward and needed to sacrifice the aiming bonus. With Force Barrier, Feat and a little bit of luck, my def. 18 should be able to keep me around for a bit.

The Kraken, all hyped with Focus, Thought about shooting all sorts of targets, and settled on the Butcher. His main cannon fired off boosting to damage, and tagged the poor bastard. One boosted damage roll later, and he’d taken 7 damage. I caught Ruin and the Wardog in the blast, too, and figured I’d might as well boost against the dog, and after a failed tough check, removed him from the game. Ruin gave less than no shits. Dirt of his shoulders.

The soul hunters, anointed with Ghost Walk after a ton of hemming and hawing between that and Veil of Mists, Charged into the Widowmaker unit. While one of Khadors finest snipers was left alive, the rest had their souls ripped out and fed to the ‘Hunters. I pulled back into the pond, making sure to be, again, around 6″ from everyone so as not to get charged and beaten to death. The Withershadow had gone earlier, Doing its simple task: upkeep, cast a spell, toss out puppet strings to the Kraken. Orin Midwinter and the Necrotech both swiveled into position. The Egregore ran, much to my chagrin, into nearly the dead center of the table, right in front of the Kraken. I made sure to be solidy 6″ away from everything that could really hurt me. Lastly, I used the last Coven member to pop feat and hope that everything would turn out alright.

either 18″ (which is absurd, because its now the largest feat in the game) or the 5″ light of Sight denial is adequate enough. This time, I seem to have hit on a good spot, and was able to really get my army where I wanted it to protect it. 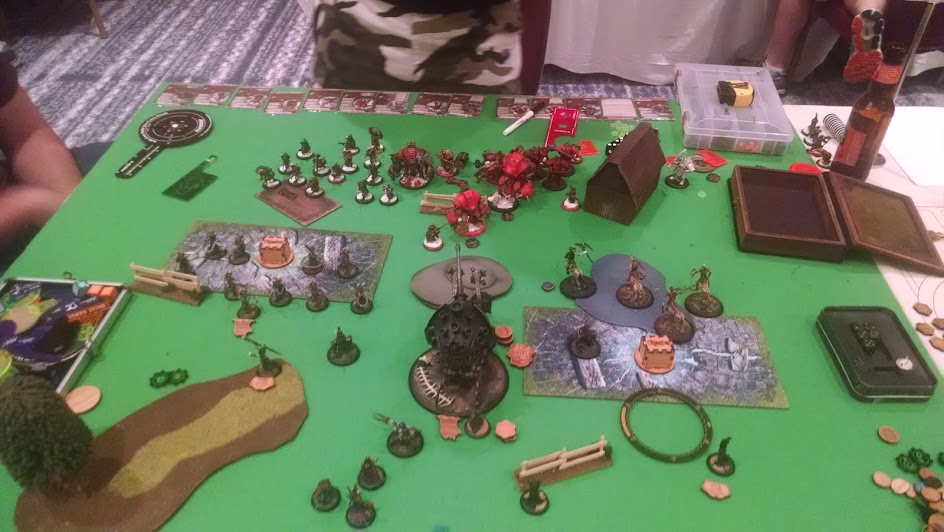 End of Cryx, Round 2

There was a little bit of thinking, but the Butcher had a plan. The Rifle corps, under the auspice of Joe’s screaming about accuracy, moved forward to take shots at the Satyxis. Needing 13’s isn’t exactly good, but it seemed not to be terrible, either, as he managed to shoot down 4 of them. The demo Corps rounded the house and pulled up in front of the lake, sitting in the darkness, unable to see and therefore charge the Soulhunters. Two juggernauts ran in to tie up a some Soulhunters and the Kraken. The lone widowmaker shifted around. Ruin, feeling peckish, pushed forward to threaten a large portion of the board that the Kraken thought he could bully, daring him to stay put and deal with the Juggernauts, or back off and leave one alive.

The Butcher went behind the fence to make sure anyone attacking him from whatever angle would have a problem.

Whew! having not suffered unduly under my feat, I made the push to start really getting rid of his army. The first Witch activated and gave my Soulhunters Ghost walk while delivering a Curse of Shadows onto the Demo Corps. The Soulhunters then activated, with two of them popping Incorporeal (because? I’m not really sure why I did that) and they all charged all sorts of which ways, cutting every last one of them down under hoof, scythe and sickle. I reformed a bit in order to block a few lanes here and there and make sure I was good and dug in.

The Withershadow, having upkept Infernal Machine, dropped Ghost walk onto the Satyxis and gave the Kraken Puppet Strings, hoping he’d do something awesome with it. they also tried to get line and distance on some Riflemen, but it wasn’t to be.

Orin, however, was able to get into a good spot to toss a lightning bolt, and boosting hit and damage, took out a few of the Riflemen.

I thought a little bit, here, about how to try and get to the Butcher. What his defenses were, what health he had, among other things. This is where, I believe, I really zoned into the game. I pitched it all. I had enough forward presence that I could probably get into a strong scenario position and maybe even win the game. I tossed myself back into 5th and started executing.

Riflemen. The Satyxis popped their Overtake prayer and flew into a blood frenzy, clearing the zone of all living enemy models, even under Iron Flesh. It was not good enough, however, as I left the stupid objective on 2. Unable to find a different solution, I moved up the Deathripper and tagged it with an arc node, finally letting me claim three points this turn, with the Coven dominating the zone behind their cloud from the objective. Lastly, the Kraken went. I was all set to tear apart the Juggernaut However, I’d forgotten to allocate any additional focus to him. Turns out, a power strike works just as well, forcing him away from me while I had pulled back as far as I could (Necrotech and Orin blocked my way to the rear) to get 2″ reach and send him the furthest from me as possible, I sent him flying back seven inches right back into the corner of the zone. I was miffed.

I did score two points, though. 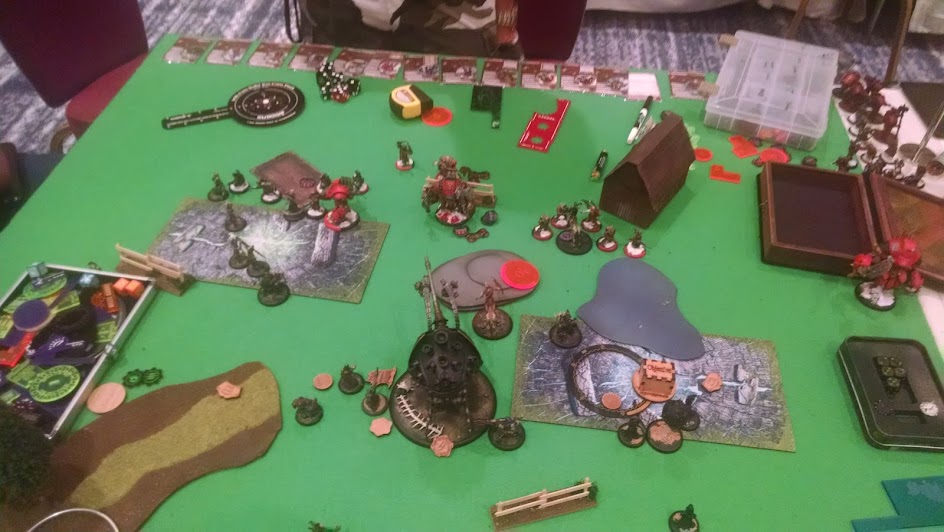 Middle of Khador, round 3

This is the turn. Butcher allocates 2 additional focus to ruin, Juggernaut that was power struck shakes, and everything else gets ready to take out what they can. Butcher goes early and pops his feat, granting a significant damage boost to his whole army. The riflemen get in there for damage with his feat, and take down a few more, as does the Juggernaut, leaving only 5, including the Sea Witch. The Mechanics charge and take down a Soulhunter, leaving only two on the board. The Juggernaut that was blocked in and on the hill took a swipe at the blocking Soulhunter and ended his reanimation state. Finally, it came down to ruin, who was eager, with Fury and Butcher feat, to destroy the Kraken.

upon further review, however, Ruin was 1/4″ out, and would be unable to charge. Instead, feeling flummoxed, he ran in front of the butcher to bodyblock.

Without anything left in to contest my zone, I went up to Three points.

There were only a few models left contesting the far zone, and while I think I could have assassinated the butcher, It wasn’t worth it at this point.I remembered to allocate the Kraken its extra 2 focus, and started my turn. I set about with the Satyxis, removing the two offending Winterguard, making sure to take pot shots at the Juggernaut. Orin Moved out of the way, as well as the Withershadow, and the Kraken went in to make short work (as colossal on heavy normally goes) of the Juggernaut. The last model peeled out of the zone, I could control the zone and dominate the other for a total of 5, winning the game. 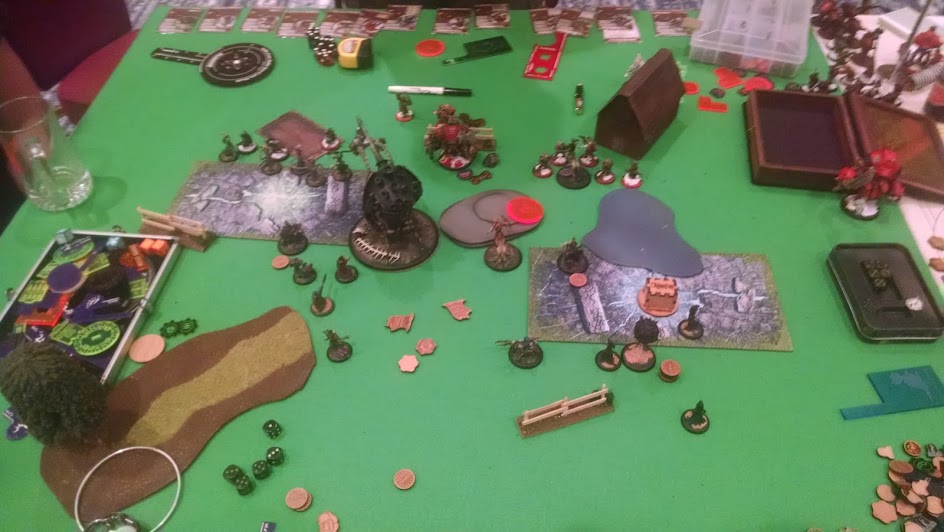 Anthony was an awesome opponent! we were both playing our very favorite casters in the game, and we had a great time. The turning point was the realization that Ruin would not be able to get in to the Kraken and remove his face extremely easily.

Extraction, and the Smoke objective, is amazing with Veil of Mists. Being able to shut down 8″ of board LOS? Amazing.

Well, Go look for the Battle Report on Frozen Kommander later this week, and I will talk to everyone on Tuesday 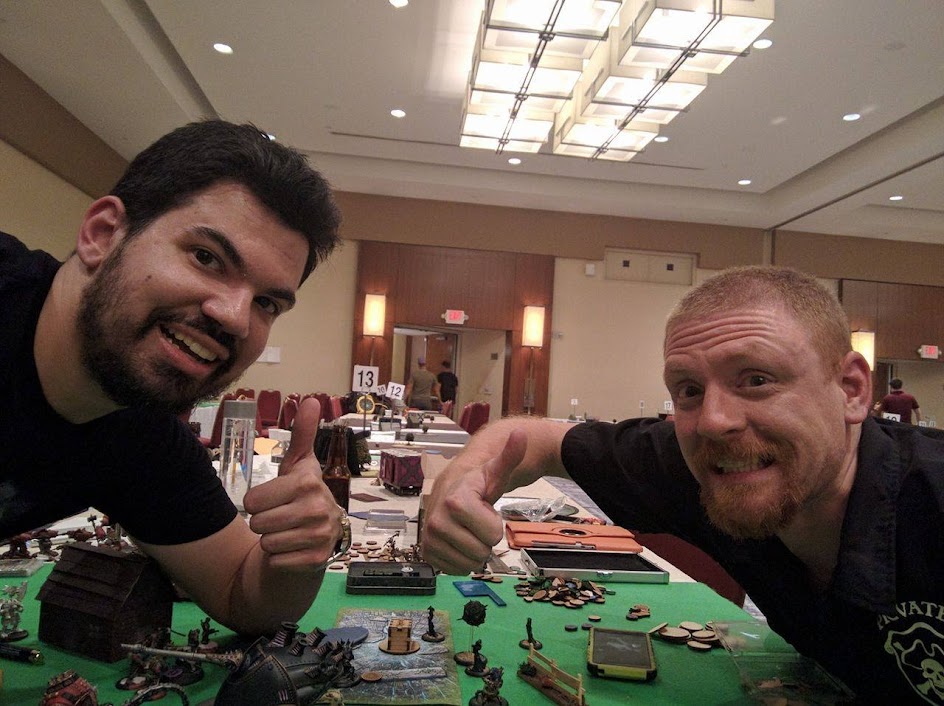