The Brawltimore Tournament Circuit has been going for about 6th months now, and I could not be happier with the results. We’ve had over a hundred people attend more than a score of events run by nearly a dozen different pressgangers. Attendance at tournaments has increased, and  most stores are seeing a sizable increase in the warmachine playing community on a weekly basis.

And, because I’m a great big nerd, I’ve been grabbing and analyzing the data from the events all along.

So, without further ado, I present an analysis of the Brawltimore Meta.

That is ever caster, in every list, from every Podium Tournament (ie one that grants bigger points for 1st -3rd), broken down by how many lists were written. Now, I know its not a graphical representation of how many times each list was used, but I do think that its a good way to see what is big, by Faction.

Things of note here, that I find interesting.

But lets take that a little bit further. Lets see what I am most likely to face, overall.

well, if I am looking to prepare lists, I really, really want to make sure I have an answer for Butcher 3. He’s a menace to society, and also to the Baltimore Region. I’ve also got to prepare for Kreuger2, Bradigus, Asphyxious 2, Skarre 1, Damiano and Harbinger. I have to prepare for tons upon tons of troopers. I don’t think the top contenders here are really a surprise to anyone, except that maybe Deneghra 2 (6 instances) and Calandra ( 4 instances) are not as popular.

Its an interesting digest of who is being played, and how often, at the tournaments in the area. 438 lists in 6 months.

But, beyond that, though, there are two interlinked graphs: 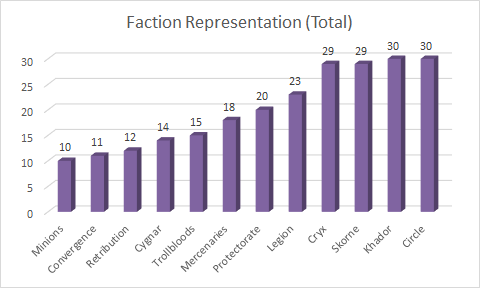 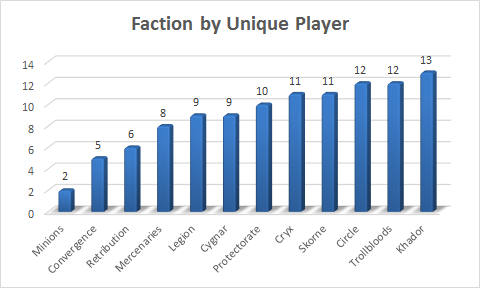 This is how many players, and how many times those players have shown up to a tournament. There have been 15 tournaments, so its telling me that I have a fair shot of seeing 2 or more of Circle, Khador, Skorne and Cryx, and a decent chance of one of each of the rest. However, It could be any of a multitude of players for the top factions. Minions, however, are almost always represented, and will only be one of two players. Knowing who you’re gonna play against can be an edge!

This next one intruges me, because it shows me the popularity of the above factions over time. 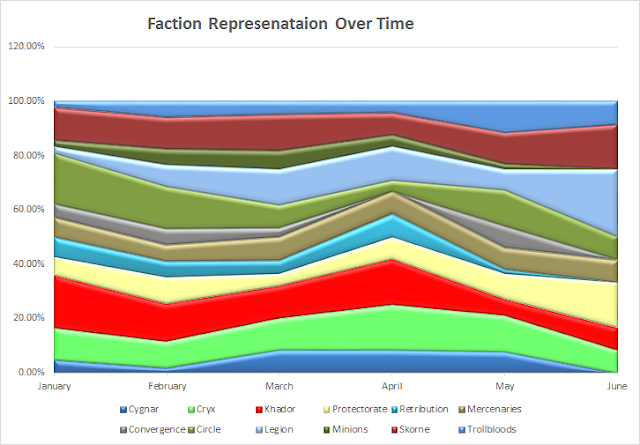 There has been a recent surge in Trollbloods, after a pretty anemic start, and a winding down of Circle after a pretty strong showing throughout. Khador, while remaining strong, has started to wane a bit, though I’d expect that that’ll tick up as soon as Zerkova and Ruin are released. Ret, though, you almost never see, and Convergence is very hit or miss.

Finally, I have the per-tournament attendance, by faction. While its interesting data, I’m not sure its very useful. people availability really can cramp a single tournaments attendance. But there are solid masses of Red (Khador and Skorne) and Green (Cryx and Circle) in ever pole. It simply reenforces what I’ve learned prior: Plan for Butcher 3, Asphyxious 2, Kreuger 2, and Bradigus,

What other type of data would you like to see on our meta? What do you think of what’s up here?