Immediately after defeating Oceiros, I discovered the Illusory wall that led me to the untended graves, and through that short stint, down to the next boss. The trip to him wasn’t hard, and after the first time exploring the area, I never had to take out 2-3 small mobs and that was it to get back to him and start the fight. Thankfully, I didn’t have to do that too many times. 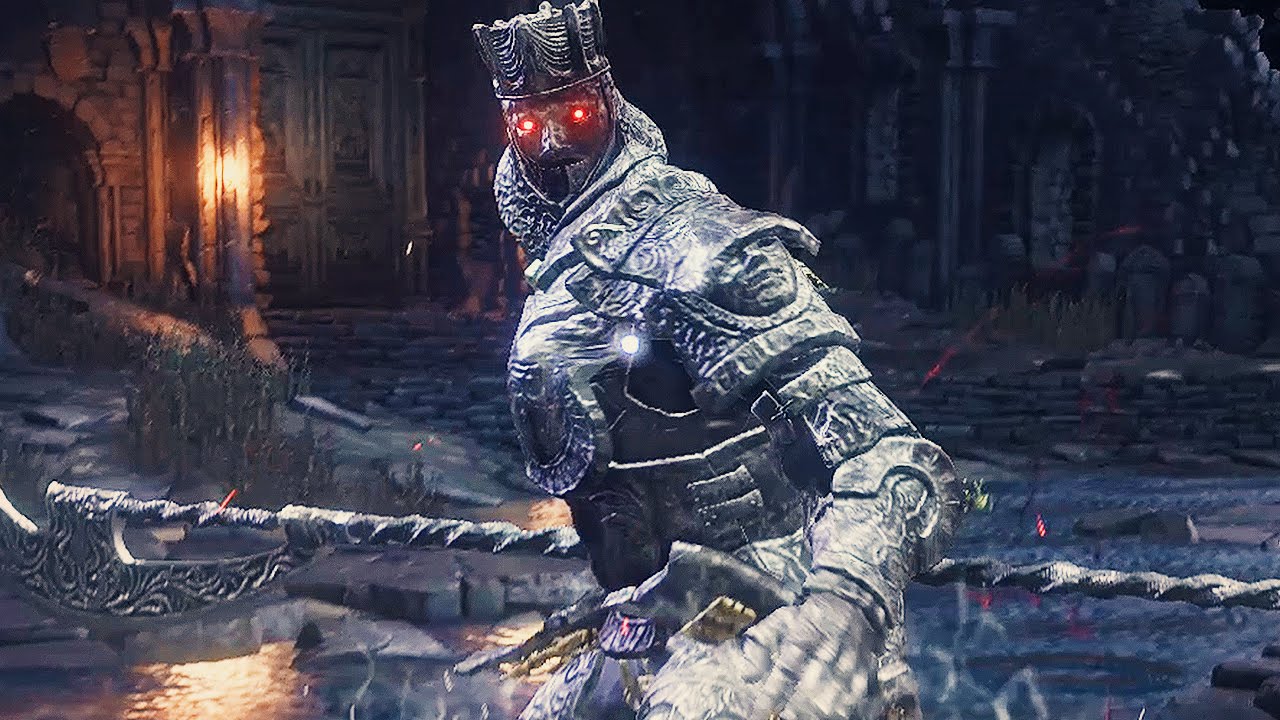 The Champion form of Gundyr is much like the original form, though being such later in the game he hits harder and more often. He’s got more HP and more resistances. Thankfully, I had my trusty bleed blade, and if its bleeds – well. You know.

He starts off with his huge swings, which take up a huge portion of the fighting arena. I would run in and duck behind him, sticking to his ankles like glue and stabbing him whenever he stopped flailing his glaive long enough for me to feel comfortable. I’d keep circling him, close to his left side so that when his weapon was swung out wide, he would completely miss me because his haft flew over my head. Continue stabbing.

I did have to watch out for three attacks though. The first was his epic stomp, which would damage me even though I was hanging out behind him or between his legs, and often give the big guy exactly the time it took to turn around and get a good swing or two into my chest, which wasn’t pretty for my frail, youthful figure. The second was the jump that would take him out of my threat range and then allowed him to come back in to fight me. Getting back between his legs was always more challenging than I’d like. The final one is his kick when I am wandering around his legs. If he can connect with it, it deals enough stamina damage to completely stun me out of a block.

Each hit would do just a smidgen of damage, some 70 or so to the Champion, but every 5th hit would do massive amounts of bleed damage. (15% + extra). It took about 2 good bleeding hits to get him to the next stage – 10 hits overall, and I could tick off 2 most times that I could get off any.

When he got down to about 50%, he powers up and gets very irritated, and this is the part that gave me a bit of a problem because I was simply getting slammed over and over with little chance to heal or attack. eventually, though, through perseverance and time, I was able to bleed him out. It wasn’t a simple fight, but it also wasn’t one that I really felt challenged with, either. just enough work to learn his move set, and then, like Oceiros and the Boreal dancer, it was just getting the timing right.

Once I finished off the Champion, I didn’t really know where to go. I kind of wandered around for a bit before I found the very obvious place to go, and went into the barracks. I made my way, finally to where a new boss stood guarding the way.

Standing on a thin Bridge, with the remains of what seem to be dragons floating behind him, the Dragonslayer Armor was a massive, monstrous roadblock in my path.

Something to note about this fight is that we are on a huge bridge with some massive stone barriers preventing you from rolling or being shoved off of the bridge. Over the course of the fight, the Dragonslayer armor will destroy these precious, life saving structures, allowing you to roll, or be flung, off the bridge. Not that it ever happened.

This guy was just hard enough that I still enjoyed fighting him, but it took a long time. His hits are massive, dealing damage well in excess of 30% of my health. He also has both lighting attacks and fire attacks, making your gear choice an actual choice. He has a huge repitorie of attacks, but the ones that concerned me the most, and that ended my life more often than not, were the Shield Slam, which would often catch me in its area of effect when he crashed it into the ground, and the two handed glaive slash that sent a blade of air soaring into my chest. His Lightning Slam, where he charges up his glaive would often give me a chance to drink and replenish my stamina bar, so it didn’t really bother me. Many, many times I was so close in on his hips that his high swings, reminiscent of Gundyr, would simply miss me and I’d be able to keep stabbing him.

However, this proved problematic, as suits of animate armor do. not. bleed. This meant that I had to pull out my Black Blade and take him down the old fashioned way: With single attacks. He was fairly easy to kit around, and when I got down to low health I would carefully run around behind the well in the center and take a drink, if I couldn’t get him to lightning slam. When I finally felt I had a hold on what he did, he triggered his second phase, where it looks like blood comes spouting onto the bridge when its actually fire from the dragons around you. While I was trying to keep him in place and not let him jump into me with that massive hit of his in the first two phases, in the final phase I was constantly trying to drag him back and fourth over the raised well area in order to stay one step ahead of the dragons breath. It took more than a little while, because he hits so hard that a single mistake is massively punishing, but I took him out.

Grabbing his soul, I headed into the Grand Archives, where after defeating the guardians within, and some really cool NPC’s, I entered the chambers of King Lothric of Lothris, though he’s actually the prince. 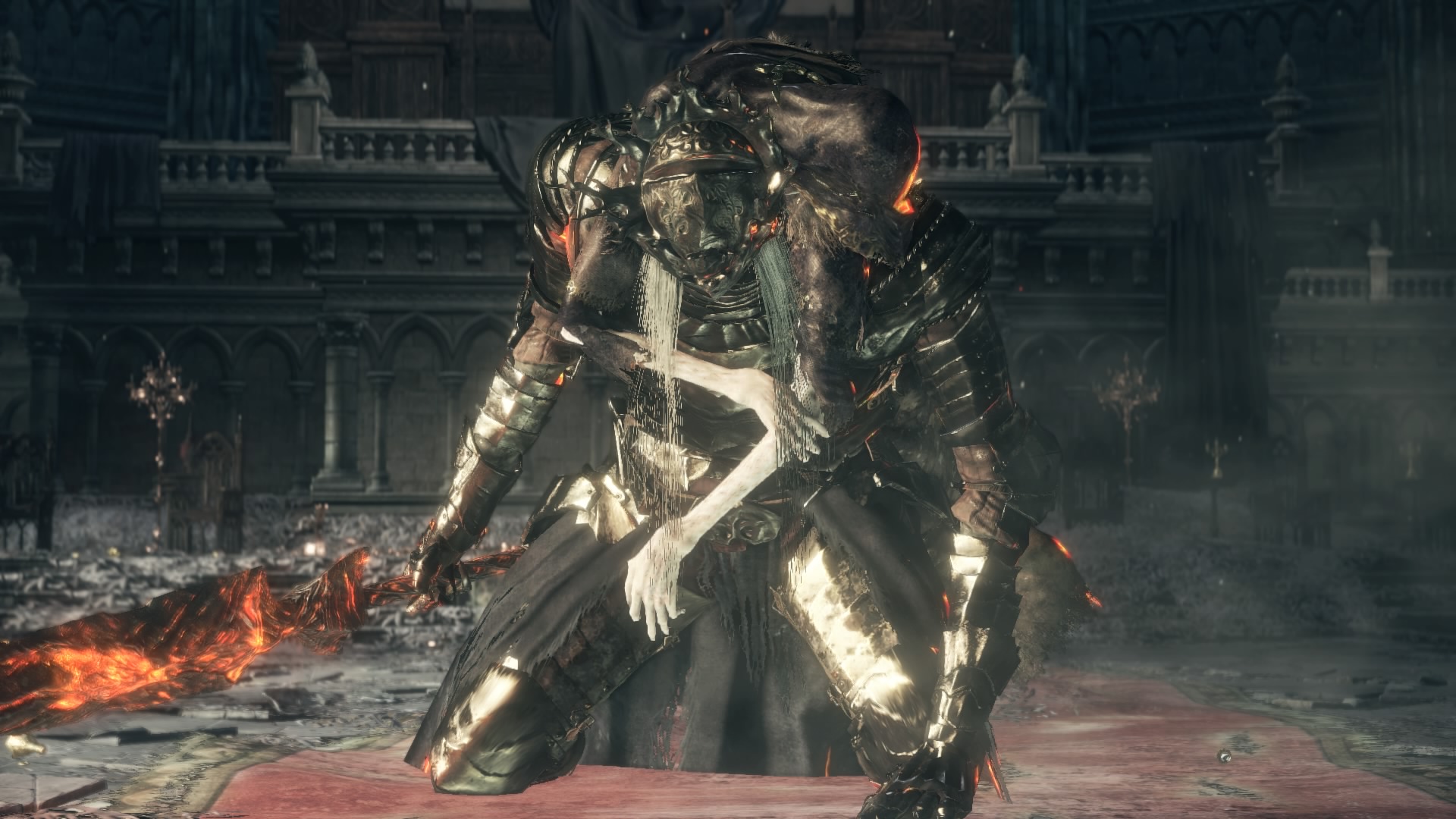 These guys were a massive problem for me.

When the fight starts, Lothric talks and sends out his older brother, Lorian, to deal with you. Lorian is huge, has lost the power in most of his legs, and does wide sweeping attacks and huge downswing attacks. This boss has a counter to my favorite tactic of getting behind them and stabbing their calves because his brother, Lothric, will teleport Lorian around the room, often behind you, and take you by surprise the first 30 times you have to fight him. but if that was all he did that’d be fine. I can get to his right, and I can often simply block through, roll under or walk into a blind spot and not be hit. When he does the short teleport, you keep your lock on him, and can often roll right into him and then get behind him to stab him. Every once in a while, though, he’ll be teleported away and you lose your lock on. This is the key to find a place that is either far away or right underneath him, because he is charging up a huge holy flame burst. Whats most infuriating about this burst is that it tracks to some degree, and does so much damage that it often kills outright. Learning when to time the roll to the side in order not to eat the flames to the face is really tricky when you’ve no lock on and often can’t spend the time spinning to try and see where he is because then you die. Once you’ve gotten all of these down and bled him out because, like all good monsters, he bleeds, the real fun begins, though, as we’ll mention later. What was really irritating about this fight was my complete inability to adapt to what he was doing so often. I couldn’t tell the difference between a number of attacks that should determine if I block, roll or strafe to get the most damage in. Additionally, there were multiple times where I was drinking from the flask and his blow would come right out and above my head. While an excellent save for making sure you have enough HP to finish the fight, its was infuriating because I couldn’t repeat it while I was attacking. It would be great, but nope…

Lothric resurrects his elder brother, mounts his back and starts hucking spells at you, teleporting the two of them around more often, and empowering Lorian to really beat your face. This fight was one that really goes my way, once I get to the final portion because of the natural inclination of my playstyle to get behind the target and stab it a bunch. You can kill the elder brother a thousand times and it won’t matter, but when you take out Lothric, riding on his back, is when the fight ends. Thankfully because I am a close in fighter and using the little dagger, it hits and bleeds them both out at about the same rate, so as long as I kept getting attacks in on the back. It took me many more iterations of fighting Lorian than it did fighting them combined because its the same fight for me – stab in the back. The big issue I had with the second phase were those stupid soul bolts that he summons at the start of the conjoined phase. They home in on you and you have to block them somehow, or roll out of the way, and the big guy is always teleported right on top of you and you can’t just stand there and wait, as he’ll plow you into the ground. The breakthrough there came when I realize that the pillars in the room stop the soul masses, and then at the start of the duo phase, I just rolled right behind one of the pillars.

I’ll save the next boss for their own post, cause I’ve yet to finish him!

My strategy does seem to be working, though. Get behind em and stab a bunch sometimes does wonders!