Earlier this year I signed up for Project Orange Crush Hunger. The concept is for the community to volunteer to paint models of a given army in an orange theme of each painters choice, and then once the army is finished, its raffled off. The proceeds of the raffle go to hunger relief in conjunction with the years Foodmachine efforts. This, the third year, they’ve chosen to do an orange Convergence army.

Enough people signed up, however, to do two armies. I’m blessed enough to be in the same army as Meg Maples and Sarah Supik, so I really wanted to do the scheme justice. I picked the Algorithmic Dispersion Optifex as my model because I thought it was a pretty simple model and it was released at the right time frame for me to have it all painted up and out in time. Now that I have the model and have painted it, I’m really impressed by the complexity of the model. For being two simple pieces, it has a pretty staggering amount of detail. Thankfully, I’ve got a ton of experience painting orange. I’ve done a whole Cygnar army with orange cloth, a ret model with bubbly orange armor, an orange Thrullg and even Lord Carver with a giant orange cloak. To say I love painting orange would be an understatement. Its a challenging color and has a some really cool interaction with a number of other colors.

This model took a ton of time, for a solo, to finish. I think I worked on him for about 8 hours, maybe 10.
He took at least 4 coats of orange to make sense. The first started off way, way to yellow. It looked glowy and strange. I tried some shading and it really looked awful, so I tossed another orange on there, this one was to red, I’d pendulumed way to far. I tried some inking and shading and highlighting, but it was still ugly. The next layer I passed on was the right color, but I couldn’t really get a good shade going on it. I put a little shade on it and ruined the look. Coat four finally got the color right! 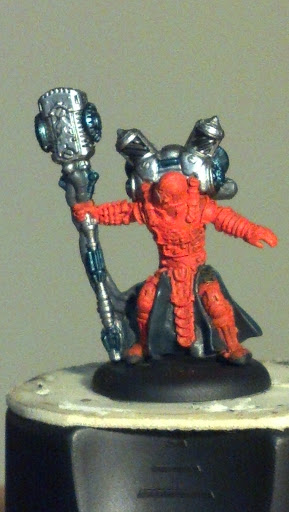 I was then able to mix a nice orange-brown to shade with. I was pleased with the results and started highlighting. It wasn’t going well, so I took a peruse on the internet and found some nice schemes to work a little off of and kept highlighting. I was eventually pleased with the results.
As you can see, I originally was going to do a gunmetal blue armor tone. that ended up abandoned in favor of something that I felt more comfortable with. Bronze is a color I’ve been painting for years, and something that I didn’t think I’d need to mess with for weeks at a time.
The back of the model has a ton of piping and armor bits and tubes, so I was really leery to get color on it, but I think the base color of dark grey goes will with orange, so I settled on the neutral color for the tubes. 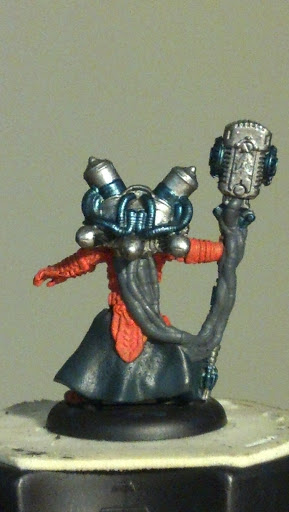 I’d also chosen to go super-safe with a black-blue skirt. Black and orange is always sharp, and I knew I wouldn’t really fail. Also, with this much orange and a ton of silver, I knew that most of the rest of the model would like to be a bit more subdued.

After a bit of work on some different oranges, I decided I couldn’t really get the effect I wanted with some dark oranges and some light, so I put a bunch of silver trim on the model to break up some of the larger plates and called it good. There are probably some 8 layers of orange on the final color, with all the layers beneath that in places show through on purpose to give depth to some of the shadows. A nice bronze, Leather straps, blue power generators and eye peice, and we’ve got a model! 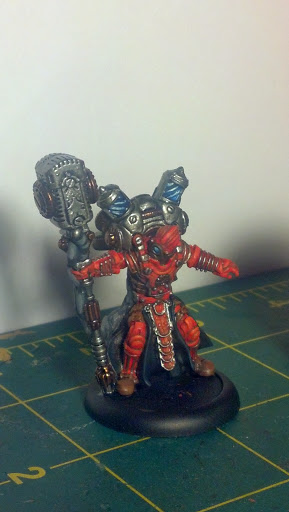 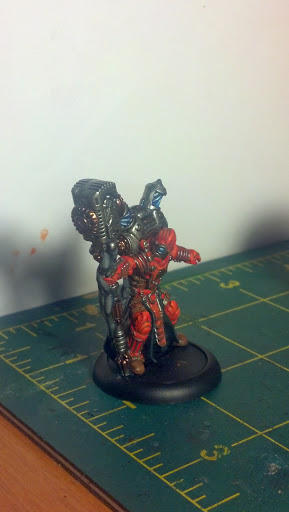 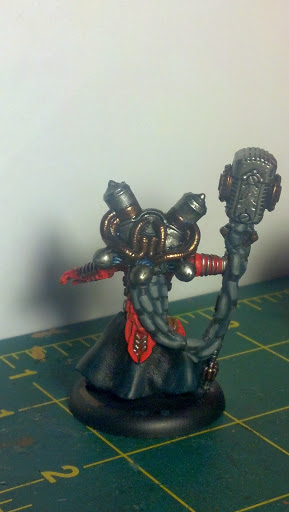 I really wish I could take better pictures, but it’ll do.

I’m really looking forward to seeing the end result of both armies, and how much money we can raise. It’ll be raffled off on Razoo.com for Hunger Awareness and the Foodmachine project.