I’m just kinda going to go around the nerd world in a few minutes, there have been a ton of developmens I want to touch on that I’ve not been able to just sit down and rash out into a full post. It’d be perfect for a bite size nerd, If I wasn’t trying to paint every second I possibly could!

Recently, there were released a number of excellent spoilers/previews from the next/last Privateer Press Anthology book.

From the already released Exigence:

Aradus Sentinal from Will Schick

The Doom that came to Infantry Armies

I think there is a ton of potential for both of these models to be in my armies. I really wish that I played either Circle or Legion, so that I could use the Sacral vault in that army as well, but thats not happening any time soon.  I really like the look of the Aradus, but the base-to-model ration is, as always, suitably Skorny. The guns it brings are a welcome addition to almost every Skorne army!

The Sacral Vault I am a little less thrilled about because I am gonna have to get a PG to paint that monstrosity up for me, and then trade them a painted model of equal value. Hopefully I can get this done before Lock and Load, where I play my gators.

There were also reveals, releases and spoilers on the jacks for three of the five factions that are going to be getting new character Jacks in the upcoming Reckoning book.

Dynamo, who’s just a monster from hell, was released, Moros was spoiled in the latest No Quarter, and Ruin has their rapid prototype model revealed. Honestly, Ruin determined my second Khadoran caster, and is allowing me to comfortably expand into a two list pair that is extremely cool to theory about. Moros is going to cause me no end of fits, when I play Skorne. For the vast majority of the time, however, I play Cryx, and I won’t need to worry about that little machine from hell. Dynamo is the model I am least enthused about, but that is probably because I don’t want to get shot in the face anymore. I just can’t take it.

A really cool model, though in ret, so BOO!

THE Khadoran Warjack of the Future.

Seriously, look at that thing. He’s wearing a Warpwolf for a cloak!

The Complete Release of Infinity v. 3 or N3

When this initially came out, I was ecstatic, and I think I still am. This game has a ton of potential, and is a very, very well made game. That doesn’t mean its perfectly balanced or an extremely tight ruleset, though is it better than most.

They had originally said that Human Sphere and Campaign: Paradiso were going to be kept as is, but they have since recanted, in their own way. Now, with the release of the edited rules for the expansion books and all my models with new stats and rules again, I can feel the excitement creeping up on me.

Oh, and have I mentioned that all the rules are FREE

What you would need and want to assess the game are:
Basic Rulebook
Troop Profiles
Human Sphere Rules
Paradiso Rules

I really think its a game that most minis gamers will enjoy and find enjoyable, and you should try it out!

According to this post, Avatars are completely removed from the game of Malifaux. While there are various ways of saying it nicely, they are out. There are rules for using them in a campaign, which is adorable, and there are ways to use them as legal proxies, which I fail to see as a reason to purchase them, but they don’t mean anything. I think its a brave decision, but its even harder on me in the wake of the Infinity Profile Trim. Out of three games I play, only one has never removed a model willfully from the game. While it may be eclipsed by other models, I will always be able to field the models I purchased within the limits of the game. Infinity recently took some of the weapons and options away from certain troop profiles, removing some of my models from the game, and now Malifaux is doing the same. Thankfully, I’d never gotten my Perdita Avatar after the rules made her so derpy I never wanted her.

Going along with that, I understand their decision. Its 30+ models that need to be worked into their new style of game, and I don’t even think its possible, especially when your trying to get player feedback. Certian Players are going to want big, nasty, awesome centerpiece models, while others are going to want the choices of taking or not taking the model to be nearly automatic. I agree with the decision, but I don’t like it.

After the success I had with my Bane Spartans, and the initial rush of the Ninja Nyss, I have expanded further outward with my desire to convert. Its not an overwhelming desire, but I do like the uniqueness it gives my army. The first thing I had decided was that I was going to turn my bane Knights into Samurai. That’s being done by a simple head and weapon swap, and I have actually built them and have em ready to go onto the new bodies when I get them. The second is the Bane Halberdiers. I use Steelhead Halberdiers from time to time in my  Cryx lists so I wanted them to match just a little. In order to accomplish that, I’ve decided to replace their halberd heads with Bane Axe heads and replace the Steelhead Bucket Helmet with Bane Knight heads. After I paint them up and get them matching the color scheme of the Cryx army, they’ll fit right in!

Painting is finally happening on my Skorne force. I’ve joined the Tale of Warmachine and Hordes Painting Group, and I have to paint five points of models every month in order to continue participating. To accomplish the monumental task, I’ve decided that I’m going to paint up the rest of my unpainted Skorne warlocks, and get using them on the table. First up is Rasheth, who I have to say, I am pretty proud of, for his spot. He’s sitting about 70% finished, and I look forward to having him finished! 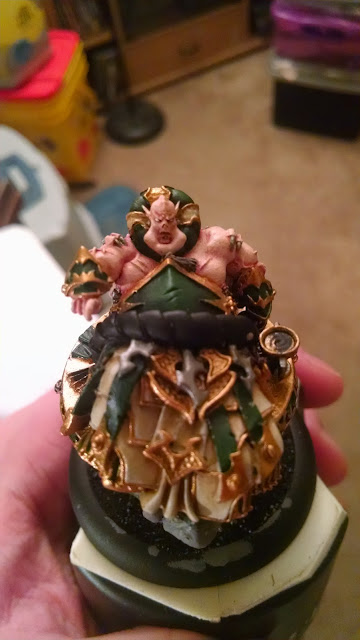 You will also notice that my pictures suck less. Thankfully, the phone I have sucks less!

Nova Open and the ECR

Its about time for the NOVA Open and the East Coast Rumble to start getting ramped up, and I am looking forward to seeing a ton of people and getting some games in. Running and judging WMW qualifier events is no small task!