I have often said that I wanted to write a bit more about DMing, and I think I’ve found a way. Now, at least every other Tuesday, I will be writing about my DMing style, my research, and about what I do in order to create the game that I play in. This will not be a series on actually DMing a session, but instead on how to set up world that breaks the suspension of disbelief the fewest times while also giving the greatest felling of setting, time period, and culture.

Come and let us delve deeply into designing a world.

Before we get started, I want to lay out a bit of  what the goal is.

For the last 20 years, I’ve often done a massive amounts of research into a myriad of topics and disciplines in order to be able to present my D&D world as real and believable as possible. Often, this results in hours spent reading about Imperial Roman Mines, the Feudal Manorial system or even weapons developments of the early medieval era.  Sometimes, the research plays a significant role in the day to day gaming group, but other times it just comes up in hints and shadows in the background. I’ve very much enjoyed delving into these topics, and thought that there might be something other can gain by me expounding on the findings and applying it to building their own world.

I want to be clear, however. This doesn’t mean that I let the reality of the world the game is meant to reflect bog down the game. Instead, I strive to create a world that is both convincing from a player point of view and living from the characters point of view, approaching the world I am creating with the same basic laws of physics and fundamental realities of our own. I do this to ensure that even though the players are located in a world rife with magic, giants, dragons, and orcs, they can find their mental way home. Forcing a player to think about their surroundings though dissonance is not the goal. Having them absorb it through similarity is.

That means starting with a certain eye to detail, and becoming willing to change extremely small things in order to better portray the setting, often at times only you will ever feel satisfaction in. Players often won’t even be aware of all the effort, and that is perfect. Designing a world that the players don’t think about and question is the whole goal. That doesn’t mean you can’t start doing this today, on a campaign or game world that is decades old. Take the first step, and don’t be afraid to retcon the little things in order to make the world fit, and certainly don’t worry about making sweeping changes to your campaign that no one else has seen.

Starting off, we’re going to need a good, pleasant landmass for the players to explore and game within. This means the creation of the area of the world that the gamers will adventure, live, die and fight in throughout the campaign and often beyond. Well, that is the goal for me at least. Creating a setting that can be played in over and over again.

So, Lets start with a couple looks at actual, real world places, but only after we talk about maps for a bit.

Maps, as it happens, are a pretty inaccurate way to portray large areas. The current projection we have, Mercator, was given to us by a Flemish Cartographer in 1569. This is the map you most often see, with a large greenland and a small Indonesia. This map provides a massively skewed projection of the world, with landmass and size greatly distorted. 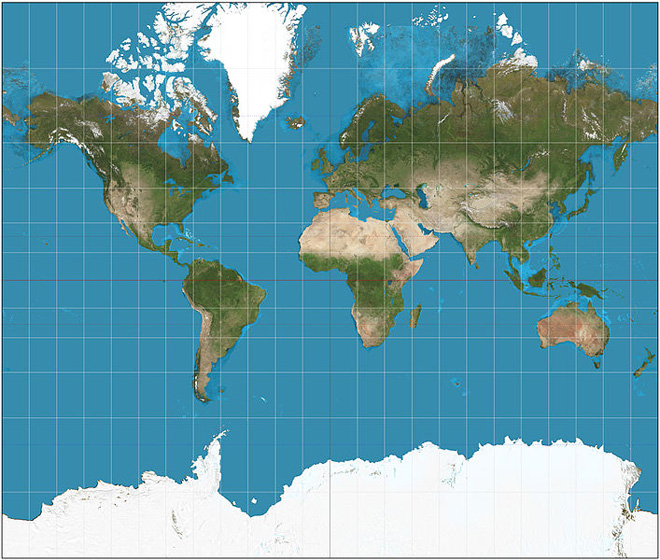 Notice that the squares are stretched as you get further and further towards the poles. The real world isn’t shaped like this at all.

This article gives you the basic rundown.

So, Know that Europe is small, as the game goes. Take this into account as you make your own lands. what worked in a relatively compact society of similar individuals may not work across large, broad lands with no easy access to water.

Look, too, at the way many landmasses here are formed. Almost every continent has one or more large, deep bay or gulf. Most of them have large peninsulas, and there are many large islands near important places. Both of these are hard to incorporate into a general map or outline, and they form either strange positive or negative space in relation to the outline you just drew. This means that often you have to add them ex post facto, and that, again, can be extremely aggravating. Often, these bays, peninsulas, and islands will look initially strange to our eyes, but that it simply the brain trying to create relationships to something it already knows. Italy looks like a boot, Florida is a little penis. The whole of Africa can look like a horned skull. South West Asia and India looks like a face.  These illusions will play upon you constantly as you struggle to bring the map to light. Don’t fight it. Embrace it.

In addition to the larger land features, zoom in and look at some of the smaller portions. Coasts are riddled with bays, even at the large Mercator projection above. Seas are everywhere. Small inlets and coves are the rule, not the exception. Islands lay off the coast of almost every area of the world, and most of the time they are big. Embrace these, too. They are great areas of conflict! Britain, Corsica and Sardinia, Sicily, Japan. Each of them have long and storied histories that play critical roles in the civilizations around them. I often regret that I didn’t place a nice sea in/around my campaign setting, and think that one day I will have to fix that through a campaign.  Each of these areas, due to their access to water travel and commercial transport, will be very important.

Finally, remember that many civilizations were ignorant of much beyond their borders: Mapping whole continents is both unnecessary and usually a waste of time. Additionally, it constrains you for the future with what you can introduce. If you know what is beyond the mountain range to the west, you know if you can send barbarians through it or not. If you’d planned on it being a civilization ruled by a monastic order of political monks, it is going to take a lot of working in order to introduce barbarians across the western range. Leaving the map a significant portion of, but not the complete continent is just fine.

When creating the basic outline of your campaign setting:

Next time, we will talk about how land forms, wind currents, plate tectonics and water currents all play a factor in your campaign map!