When I left my Skorne army in Seattle after Lock and Load, I knew that I wouldn’t be playing them until they were shipped back, and because I wasn’t in any hurry, I figured it’d be a while. Having purchased and carted the Croak Raiders back to the east coast with me, I figured I’d try and get at least a few games in with them before I jumped back into Skorne, and while I’ll eventually use them in Skorne, I’ve got some plans for what I want to do when I take them out tonight.

I’ve given a cursory overview of two of the games I played back two weeks ago, I even took pictures that I never shared of my second game: 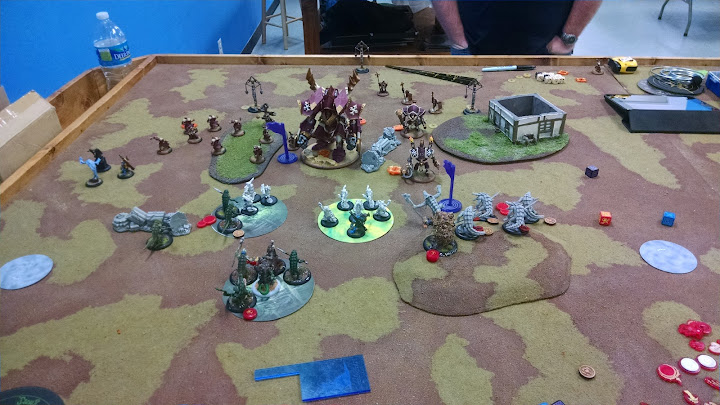 This is how a confident Ginger starts his game. 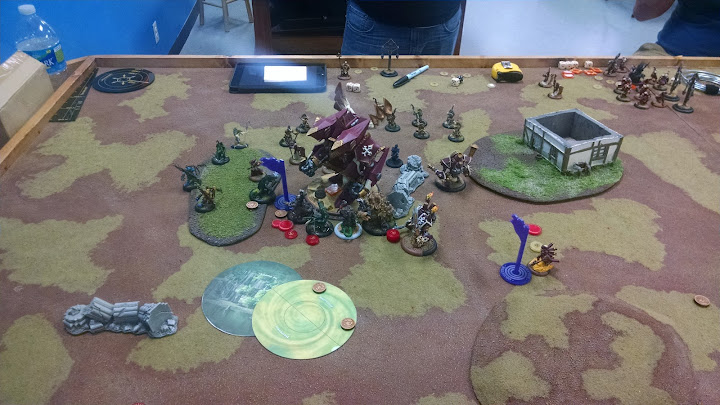 This is how he ends it. Barnabus survived to kill the Judicator, but lost the war.

Last week, I got my third, and final, minions game in against one of our newer Legion players. By newer, I mean has not been playing for 5+ years. Our meta is pretty aged. This fella, though, has gotten pretty good, pretty fast, and is playing some really nasty lists. He’s gone right for the throat, and I cannot be more pleased.

I lost the roll, and chose the board edge. I thought the hill would be nice, but it ended up being right in the way for most of my models on turn 1, and out of it the second turn and beyond. I deployed a standard formation, with the ‘Caster in the center along with his battlegroup, To either side I placed a full unit of posse and a Witch Doctor. The Croaks advance deployed and the Ambushers, well ambushed. His deployment was a fairly straight forward up-the-middle for Saeryn, blocked by the house that legion just doesn’t care about. I dropped my AD front and center, again, with a Hunter to either side of the raiders.

See, this is where I’m starting to learn a little bit about AD shooting units, and about my deployment in general. I’m not very creative when it comes to getting my troops out, and I need to fix that. Take advantage of terrain, make sure that I get some advantage to my side and deploy with a strategy to take the scenario. Its not my greatest strength. Pre-game, as a whole, is not my strong suit, and I am working on that. 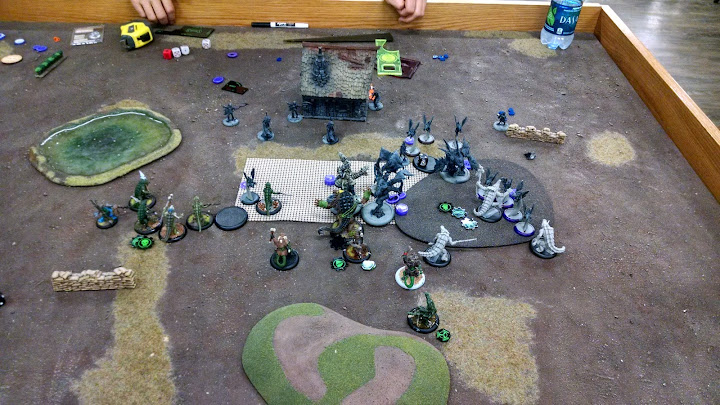 So you understand the layout. This is about turn 3.

We played destruction, and I wasn’t really ready for it, more than anything. i’d not thought about what Barnabus or any of the gators would want, but I pulled out Arcane Wonder because 1 cost IF is an extremely good advantage to have, and being able to cast it on myself fairly easily would likely be key.

Like all turn ones, we pretty much just ran and advanced. He was very aware of what my Croaks would do, and knew that he couldn’t move more than 9″ out of his Deployment zone or get cranked with some Fire Damage rolls. so, he took up a cautionary position, Typhon and Zuriel right in front of the house, the Carnivean on my right. Blightwasps were everywhere, running to either side and up the center. I advanced, tossed a single spear with my Raiders, killing a Wasp, and dropped Iron Flesh on them. One set of Gators ran with Dirge of Mists on the Left, the other with Pathfinder on the right. The Dirged unit and the Croaks received Undead and Tough. everything else kinda just moved up and around, except for the Bull Snapper, who moved up and put Spiny Growth on Baranbus, espousing the virtues of good habits. Baranabus dies the turn he does not have Spiny Growth on him. (Pay attention, this is important)

His turn two goes exactly like I expect. He jams in with everything, slaughtering everything he gets his blighted mitts on, and causing me no end of trouble. Though Undead, tough, and defense 16, he managed to land a Breathstealer on them, the leftmost unit of wasps into them,  and then clean up with Typhon and Zuriel, each killing 2.7 of my 10 Raiders fell that turn, with 0 tough checks made. It is what it is. Thankfully, I have backup in Gators, and he left a few of the wasps outside of his feat.

My turn was spent gathering forces and preparing my army to try and weather the storm what was going to follow as best it could. I contemplated using my feat here, but was deterred because I couldn’t knock down the flying models like Zuriel and the Blight Wasps. Turns out, In my haste to use a new faction, I forgot that all those blight wasps could be knocked down, and next turn it would be a fury nightmare. Instead, I just tried to make it as difficult as possible for him to make headway next turn without committing some heavies, who I hoped I would be able to kill. I was able to remove almost the whole of the Blight Wasp unit on the left, but as you’ll note in the picture, that left my entire second unit of gators out in the cold, unable to charge the next turn.

His retaliation was swift and brutal, and I really was not prepared for it. Blight wasps killed a gator, and the Carnevian killed another, all under Iron Flesh, Dirge of Mists, and Tough. My last four croaks died inglorious deaths, having done two damage to the Objective and killed a Blight wasp between them all. The king, though, was the Wrassler, who, under Spiny Growth weathered charges from both Typhon and Zuriel. Thankfully, both of their charge attacks rolled snake eyes and I was able to dodge the bullet. Barnabus, in preparation for his next turn, charged up into Zuriel when he landed and did a pretty significant amount of damage, all the while keeping out of melee range of the beast himself.

I started this turn and felt that I had to turn the tide. If I made it through this turn and could take out a substantial portion of his army, I’d be pretty pleased, overall. I brought in the Bog Trogs on the right to try and put pressure on Saeryn and kill some Wasps, and I started the turn by popping Barnabus’ feat, knocking down nearly everything left.I then walked away from Zuriel (who had respawn on him) in order to toss some damage into Typhon, who was under Spiny Growth. I also spent 4 points to heal up the Blackhide, not wanting him to go down to an unfortunate Spiny Growth Damage roll. Sadly, this put Barnabus in a pretty perilous Position (see “FLAG” below), and though I did manage to kill both Typhon and Zuriel, though my bull snapper had to chip in on Zuriel, and didn’t cast Spiny Growth on Barnabus. Indeed, even though I knew that Saeryn had a Grevious Wounds Knife, I still left myself with two fury, enough to have cast Spiny Growth. 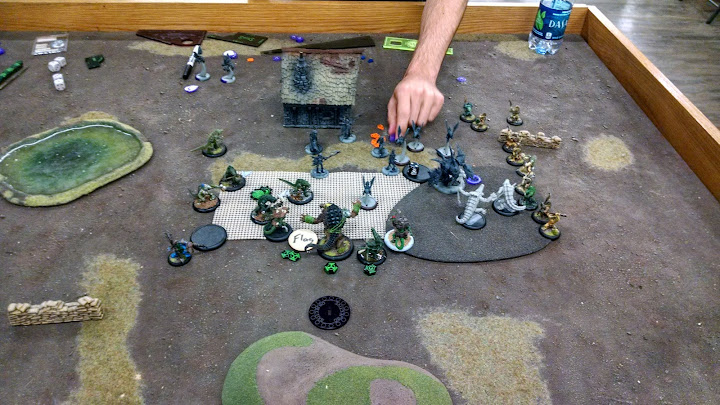 Not my best of moments.

This story looks unfortunate for our Gator Hero, but there is still hope. His paltry def 13 won’t save him, but a solid arm 19 could provide the durability he needs to survive the coming onslaught. Saeryn gets the first crack at him and drops Breathstealer on him, then follows up with a knife, hitting and tagging him with Grevious Wounds. Next, she bottoms out her fury and pegs him with a blast of hellfire, doing 8 untransferable damage. Now, the blight wasps come in, with two getting the charge after shaking off their knockdown. After all the attacks are made – two charges and two buy/boost damate, I am left sitting on 2. The final nail has to come from the Carnivian. He is currently engaged with two gatormen, and in order to see Barnabus, he has to move. He takes the first free strike, which does around 7 damage, blowing out his mind. The second free strike spikes hard, rolling 6/6/5 and doing some 12 damage to the poor fella, and blows out his body. He still has his spirit, though, and can force for boosts. With his spray ignoring in combat bonus, he needs a 7 to hit, and at dice -5, he needs 7 damage to kill me. Its nearly a coinflip, but he drops them both, and poor Barnabus roasts in dragonfire.

I thought I had it, and my opponent even said the same, but in the end, what I said would happen, happened. Without Spiny Growth, I didn’t have a chance, but with it, I may have been able to survive. the Blight wasps would have left me at much higher health,and a dice -7 spray from the Carnivian is a much harder task to accomplish.

Even with Iron Flesh and Tough, the Raiders were really unable to leverage any sort of offensive output. That is, to be completely honest, my fault. I’ve rarely, possibly never, used an AD shooting unit, and it seems they require much more finesse than at first blush, especially against an army so fast. Me getting them killed, or even simply wasting them, has been a theme in all three games, and I look to make better use out of them when the day comes that I pick them up again. I can see how they are very good, and I know its my inability to use them correctly that is holding them back.

Now, though, I Finished painting Zaal right before I went out to Lock and Load, and I look forward to putting the Immortal Host on the board tonight!