Last week, between Thursday and Sunday, I managed to get six games in with my Skorne. Totaled up, that is more games that I’ve had of any Privateer Press system in that short of window in a long time. Five of those were at a tournament on Sunday which ran extremely long, which I’ll get to on Thursday, but to prepare, I was able to get a game in on Thursday, which allowed me at least a single practice game in before I attempted to take on a cutthroat tournament.

I’d decided long ago that I was going to take The Fist of Halaak, but there was some shakieness when it came to the pairing. I didn’t know if I was going to be able to make it work with Rasheth, who I originally wanted to take. I Janked up some strange lists with him as well, but the Shifting Stones errata a week ago made me not worry about Bradigus as much, so I went straight with the 6 beast list.

I made it out the local game store to play a friend, and we’d talked about the lists we were going to play. I knew I wanted to play Rasheth, just to get a feel for him, and he was going to play Butcher 3. Man, I knew this wasn’t going to be good. I’d thought about the layered threats that I would have to put up there just to prevent him from killing all my beasts, and with Impending doom, and his propensity to Charge – Attack – Energizer, I would have to have melee threat 5″ from where my beasts started. If he can run up and tag it at reach and energizer away, I’s have to be charge -5″ away from the front of the beast ahead of me. With, at best, an 11″ threat, thats 6″ away, and with the 9.5″ of everyone else, I’d have to be 4.5 back. Sadly, unless I am towing reach threat on butcher, somewhere between 10 and 13″ back, the dude 4.5″ back would be sucked into an Impending doom and killed. The Sentry could be behind my front beast with under an inch of wiggle room, and then he can just stop shy with his dogs, and impending doom the first beast up, and be completely out of threat. and with flashing blade, I just wasn’t going to make it up there.

It occurs to me now, as I write this, that I could have had them arm lock or headlock eachother to prevent pulls from Impending doom, and that may have been a decent strategy, but I just don’t know. I’ll have to mull it over.

Anyway, when I arrived at the store, I’d forgotten to bring my swamp gobbers, so I added a pair of Paingiver Beast Handlers to the army – Turns out, they are a pretty solid 10 man unit for 5 points, and other than that, it was a standard Titan Heard

As I mentioned, they were both lists that we had talked about leading up to the game, so there weren’t any real surprises. We’d gotten Close Quarters as the scenario, and I ended up with first turn.

This was the first time I played this list, so deployment was kinda hap hazard. I deployed heavy to the left flank, as you can see, trying to make sure that I would be able to at least contest the zones there. I figured that I’d loose a Titan to the Kayazy and the IFP, and thought that putting Tubby out there for possible spell assassination to either side could be worth while. 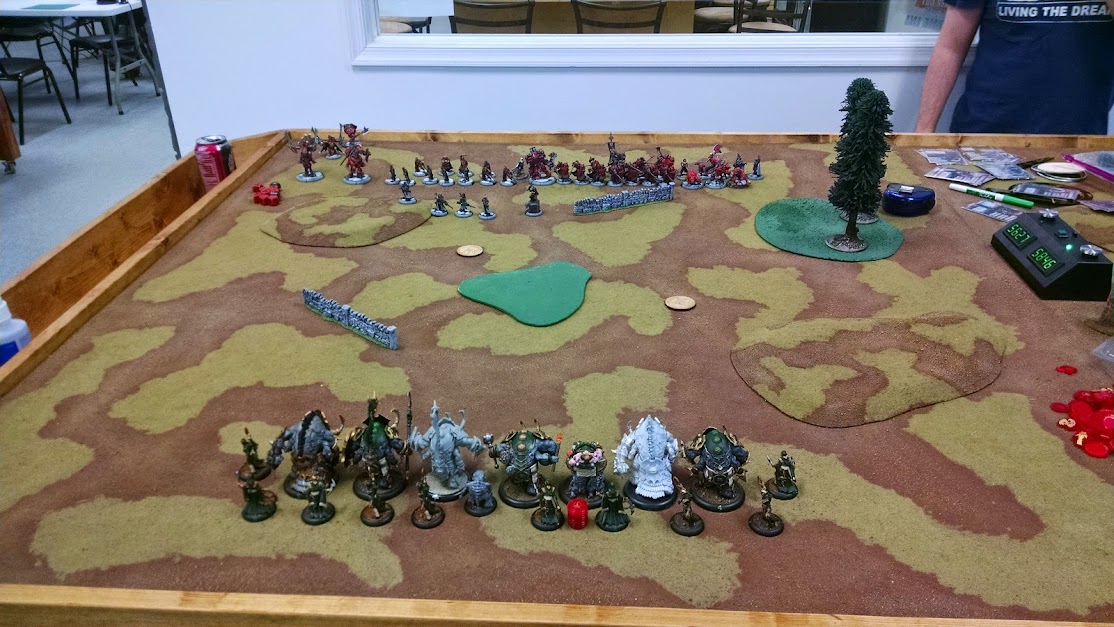 He deployed heavily towards my flag as well, with Butcher 3, the IFP and the Kovnik. To the left he put all his scary, monster fast and dodgy stuff: Drakhun, Fenris, and the assassins.

as always, this one was the simplest, as we all just ran. However, it was here I had trouble with what I wanted to do with my fury, my beasts and my caster. The Bronzeback on the Right got Rush and ran, and both my Gladiators got Rush and trampled forward. The Sentry and the Cannoneer simply ran. However, due to spacing and other rush, it created a jagged, uneven line unable to support itself.

He ran the Butchers Block into the woods, dropping smoke around them to make them a difficult target. Everything else ran straight forward, with the exception of the Cav, who went a bit wide left, running around my flank. 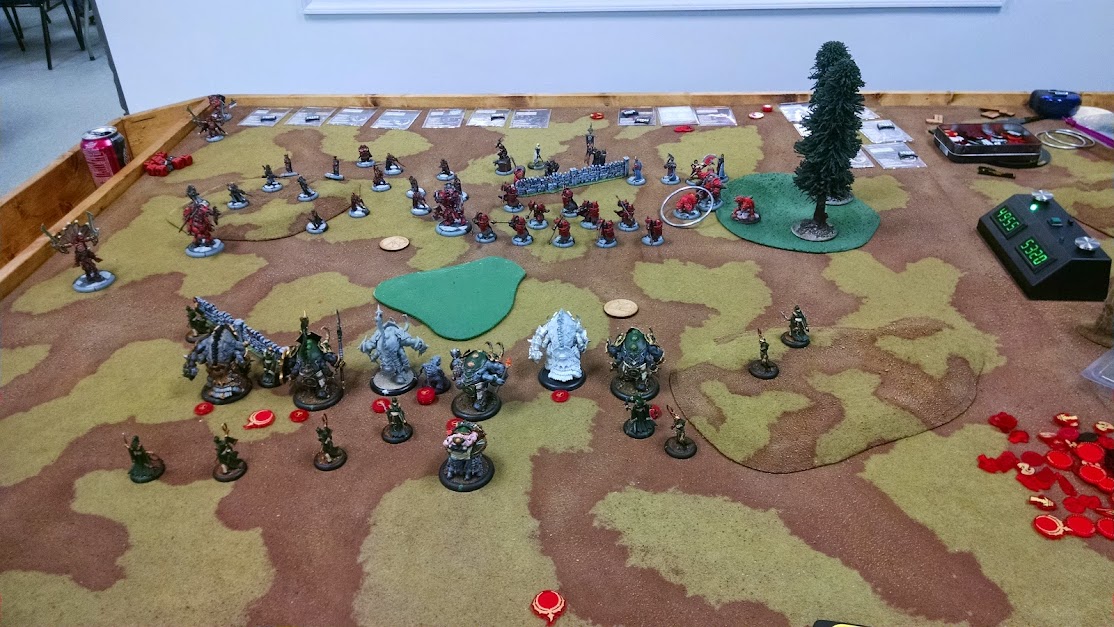 I knew I was in charge range and couldn’t get out, so I figured I’d jam him with some hard to kill titans, feat, and watch him struggle a bit until I could pull it back out. However, poor placement and timing of activations ended up making it so that each of the models I wanted to, couldn’t get where I needed it to. I settled for Jamming in with both Bronzebacks, who at the worst could still animus, beat back, carnivore, and eat most of the unit that attacked them. The Gladiators each wandered to supporting positions, with the Cannoneer taking a pot shot and the sentry sitting back a but. Rasheth where he is is a bit of a problem, as he can’t support either group of titans without getting in his own way. I do manage, however, to tag Butcher with Blood Mark, allowing a transfer is someone gets near.

His turn is a lesson in Hubris. It turns out, there is a very good spell on Butcher 3, and that’s Grievous wounds. Placed on the IFP, they were both able to tag the Bronzebacks, preventing them from healing or being Healed the next turn. I also forgot about Hyper aggressive and Counter-charge, both abilities that I could have positioned myself to use, had I remembered them. The defensive feat helped a ton, and was able to keep both the Bronzebacks alive through the hail of punishment that was doled out to them.  I was, due to precision Strike, unable to keep my spirit, however, loosing both the ability to force and thus the ability to use my animus. It took almost an entire unit of Iron Fangs to break the spirit of the Bronzeback on the right, and the one of the left survived an unlucky Berserker and a set of charging Kayayzy and the Drakuhn. Fenris, who I now know to be the mortal enemy of Rasheth, advanced around the edge to try and take out Rasheth.  The Agnonizer, useless here, even took a shot to the face. It was not the best of times for my poor army. 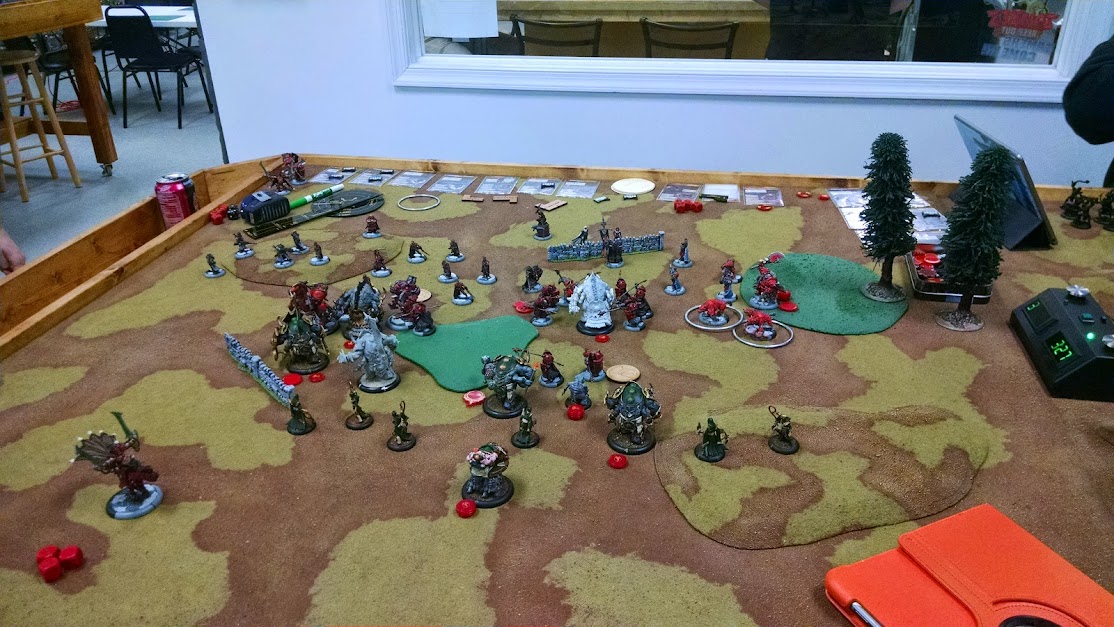 This one went no better for me. With my best titans crippled, all I could do is hope to play out for a bit of time to get back online. After I moved Rasheth exactly far enough not to be charged by fenris, I managed to catch three IFP in a Breath of Corruption, killing them all. I sent  Cannoneer in to assist, the beleaguered Bronzeback, giving him Train Wreck and trampling over an IFP just so that I could get there. Sadly, while I did kill the one model I trampled over, my puny MAT 5 just couldn’t get the job done, and I wasn’t able to Beat Back into anything. The Gladiator on that side Fell back a touch, thinking to provide scary support to Rasheth and the two other titans ahead of him if Butcher made a move. The Bronzeback on the left did what he could to wreck the Berserker, but was unable to with only his four pow 17s. The Gladiator chipped in the last bit of damage and slew another model that was hanging around for good measure. The Sentry, Probably in the worst decision of the game, went over and killed the Drakhun instead of taking care of Fenris, or at least tying him up. I’d delt significant damage to his offensive output, but that’s not worth a whole lot when Butcher 3 is still on the board.

His turn was absolutely killer.  Butcher Charge – Impending Doom – Feat – Energizered to kill both my Bronzeback and the Cannoneer in one go. The IFP then moved in to stab a few Paingivers and tag the other Bronzeback with grevious wounds, just in case it survived the onslaught of the Kayayzy Assassins. Which he didn’t. The Gladiator took a significant amount of punishment, and the Widowmakers, who’d been plucking off Paingivers the whole time, continued to do so with aplomb. Fenris continued to run down my throat, but needed to charge the Agonizer who ran to block what he could of the lane to Rasheth.  I was now between a rock and a hard place, and I didn’t know if I could make it out. 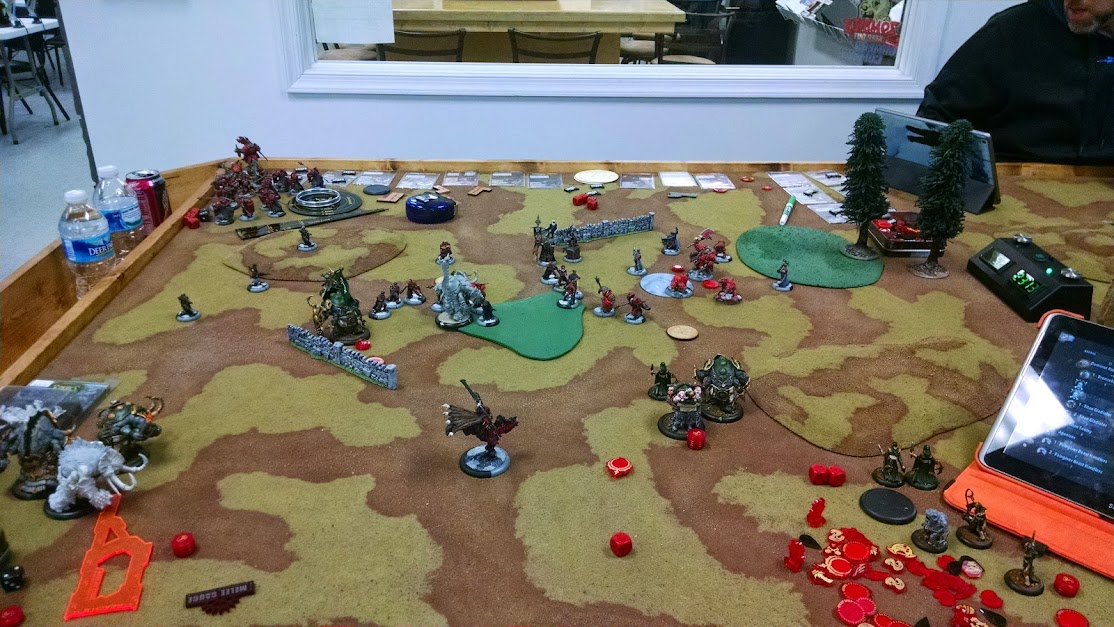 In desperation to remove models, I sent the Gladiator to trample across a couple models, picking off a fair amount. The sentry went in and took down a few as well with a trample, making the most out of his fury. with nothing to block his way, the Gladiator had to have a go at Fenris, and ran over to intercept him, knowing that it was going to be a chancy proposition for Fenris to get passed the big guy without being dismounted. Unfortunately, I also moved Rasheth completely to close to Butcher, and Rasheth was drug to his impending doom, taking two strikes with a Grievous Wounds Lola to take him out, and though he was out of focus on the Butcher, there was plenty more where that came from. 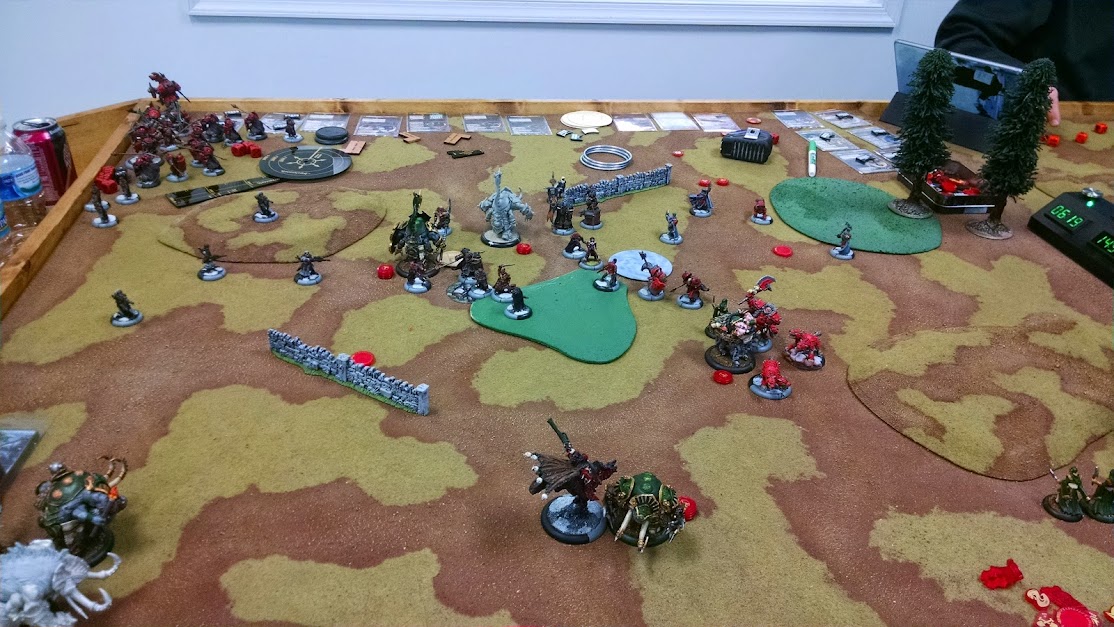 Now, In ever game, there is something to learn. I heard once that if you go away from a game thinking there was nothing you could had done better, your wrong. This had some very strong lessons for me that will make me have a much better chance at this next time around.

Overall, I felt that the game was a blast, even though I got rendered into bacon for the Butchers Dogs. I learned a lot about how the big guy plays, and its made me really excited to get him into the action a little more!