For the second time, I have injured and cast aside poor Valkyria Chronicles. I’m not proud of it, but its something I feel I need to do at this point. I have cast it aside for Dragon Age: Inquisition, and I think I made the right choice. Maybe.

When I was debating what next generation system I was going to buy, the tipping point was the fact that most of my friends had a Xbox One, and gaming with friends is pretty much the most fun one can get. Sadly, I’ve been unable to capitalize on that more than twice since I kicked up the game. This isn’t making me regret my decision, yet, but if I can’t get something going with my friends a bit more often, I am going to become deeply mournful: I wish I had more time.

I have, however, gotten a little bit of playing time in, and its a very familiar experience. Character creation is a bit less than most of the more recent games, as its mostly your face that you get to manipulate and make unique. Sadly, due to strange perspective angles, I made a giant, ungainly face that is nearly hideous. This is made worse by the fact that many interactions and cut scenes have your personalized face front and center, forcing me to face my abomination of a character nearly constantly. Even further exacerbating this is the fact that the Qunari Helms are simply face paint, and the best of these that I have paints my face in a completely flat baby-poop yellow-green 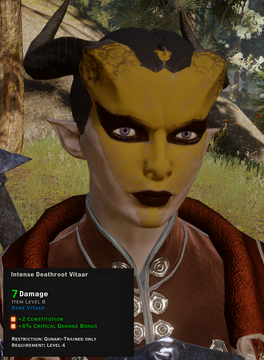 Not a fan. This has lead me to turn of helmets, which I think are one of the best parts of a game because they add a ton of character to your, um, character. Character creation is also extremely strange, because it defaults you as a woman, and the change gender button is not very obvious. This means I am playing an enormous Qunari woman. I don’t have any problem with it, I just think its extremely strange. I will also miss out on any romance options in the game, because I just can’t get that far into character.

I’ve been playing for some time, now. Hey. Lemme yell about this for a moment. I don’t know how long I’ve been playing, and its driving me nuts. I am extremely fastidious about my “played time” because I like to know how long it takes me to play a game. It was bad enough on Steam that it tracks just the game being open. I The Xbox boots the system up and boots the game at the same time. This leads to times when my wife or I want to watch Netflix, and the xbox just keeps Dragon Age running in the background. I think I might be 10 hours or so into the game, and its got 30 hours logged. It might be small but it is infuriating.

Ok. In the short time that I’ve been playing, I’ve made it to around 8th level, and I’ve recruited four new party members.

Oh, BTW: Spoilers from here on out. Just to warn you!

I’ve found Blackwall to be one of my favorites, but I tend to like stoic warriors. They do the right thing and they wield a huge sword. Ironbull is a close second, because the consequences be damned warrior is the next best thing to the stoic. He’s got the best lines and encourages the some of the most fun decisions. Vivienne ended up being superfluous, as I am already a mage, and between the two of us we end up drawing a lot of hate from the enemies. Sarah is aggravating as shit. She’s the smart alec rogue, and she oozes it from every pore. These types in a game bother me because I don’t know how any good group of people tolerate here worthless self. Its just terrible.

One of the things about the game that is hard to get a handle on his how much it feels like a single player MMO. I have this party with me of three other character and myself, and we wander around completing quests, seemingly randomly, in zones inhabited by some fairly two dimensional characters. I’ve only been to the first and second zones, but I’ve not been impressed. In a single player game its really hard for me to appreciate wandering, respawning pats that exist without a strong story reason. In Dark Souls, for example, they never respawn until you die. The area with the warring mages and templars that constantly respawn is not only impossibly strange, it also breaks my belief in the reality of the single player game.

Thankfully, I enjoyed playing WoW and feeling like I am playing a similar game, but on my own is troubling, but overall fun. The big issue I have is with the ability trees. (Thankfully, I have been reasured by a friend, but imagine for a second that I wasn’t). These trees, at the start of the game are woefully small, and as a mage, they aren’t even enticing. Storm, Spirit, Fire and Cold have nothing that draws me into the class, and I love playing mages. Nothing big and flashy is lined up, and there isn’t even really a good passive ability that I can reach for. The same goes for the other characters I am leveling. They all have abilities that are bland and uninspired. Thankfully, I know how to hold in there. Dark Souls has taught me well.

I do like many aspects of the game, though, and I think that the story is very compelling. Combat isn’t something that’s all consuming, but its still fun and active. Party members have some very fun dialogue while running around, and I enjoy the conversations with your main inquisition NPC’s.

I think that there is way to much left in the game for me to make a decision on it yet, and that I’ll need to get at least another 10 hours in to make any real judgement. Despite all I’ve said, however, I think its going to be a positive game experiance. While I can speak for lengths on the small things that bother me, the overall feel of the game is extremely positive. I enjoy playing it, and I look forward to playing it more, and I wish I had more time to play it.