This week, I take a look at what is in store for me this coming weekend at the Brawltimore finals, what lists all be playing, and who my first three opponents could be, If I manage a miraculous break through!

First, lets take a look at the pod I’m most interested in: Mine. 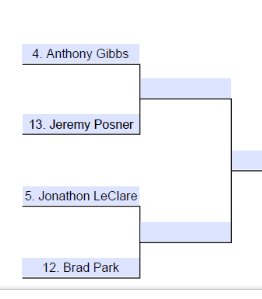 Brad Park plays Cryx, you might have heard of him, he’s been travelling all over the place. Heis an excellent player, and I’ve been having conversations about lists with him for a long while now. We both know, more or less, what we are going to be playing, and likely how, so its going to come down to dice and execution. Simply getting past this hurdle is going to be an damned challenge, though I hope to make a good showing. The mirror match poses its own problems, and I think that this creates a dynamic match that can range the spectrum from quick assassination to brutal grindfest.

Anthony Gibbs plays Cygnar. he’s been terrifying me and the locals for years now, and has recently started to travel more. He favors Sloan above a lot of other casters, and has for years and years. Its one of the dangers that terrifies me every tournament – How can I outlast Sloan? His other list varies as often as possible, and he’s had everything from Stryker 2, Maddox and Kraye in the pairing. Anthony is a good player, an awesome sportsman, and someone I have to actively tech against or be rolled over.

Jeremy Posner is a local who I don’t think travels too much, but is a very calculating and thoughful player. He’s got more than a couple factions he could whip out for the finals, but the one I see him playing the most is Cygnar. He won his tournament and qualified on the back of Convergence, however. that makes him a bit of a wildcard here in the tournament, and I think that can really cause havoc with what this pod specifically can bring or plan for when looking at the first two rounds.

Looking at my pod, I only have 3 real factions I have to prepare for: Cryx, Cygnar, and Convergence. After that, mercs is a possibility, but I don’t expect it, and think I have a feasible plan to play into them if I have Cryx and Cygnar covered.

After that, I have only 3 other factions to consider on my side (round 3): Ret, Circle and Grymkin. The other side of the board has 3 more factions to worry about: Protectorate, Trolls, and Khador. With that in mind, I started to slap together some thoughts,

Looking at all of those choices, I settled on one list that really covers a bunch of these basic problems: Asphixious 3 in Black Industries. Its a Heavy Spam with ranged protection, a fairly durable caster, excellent speed and high accuracy melee attacks. Pairing with that probably has to be a strong, standard infantry list that gives the other side of the board pause when picking a list. Making sure that you have both a standard Cryx list and a Cryxing differently list really takes the opponent for a ride, making them wonder if they are going to make the right choice and that you’re not just going to head fake them as well. To that specific end, I took a great armor cracking list that also can shred infantry when it needs to get its hands dirty, Asphyxious 1 Scourge of the Broken Coast. Its got a thousand models, has 3 or more assassination vectors, attrition strength and a modicum of denial Its just a great list overall.

This is where I’m sitting, currently. 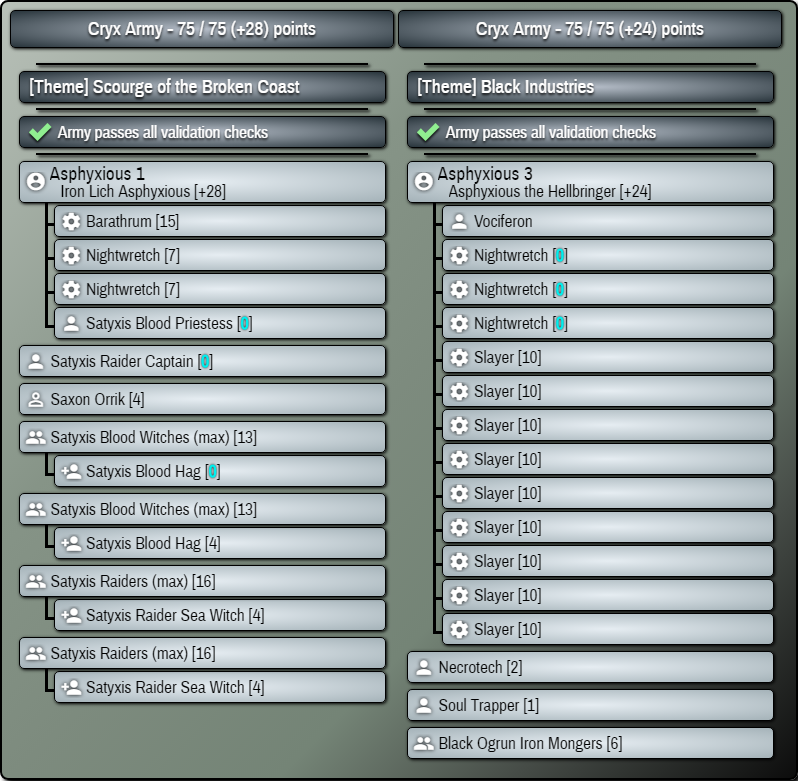 First, we get three free arc nodes, which is solid in and over itself, but it also gives us really good guns for free, which is a bonus that can easily be overlooked. Boostable Blasts are good, especially in triplicate. Black Industries and Asphyxious 3’s field marshal make the slayers deceptively durable, giving them ARM 19 v. Melee and 21 v. shooting. Ashen Veil, which Asphyxious can provide, also ups defense by 2 in most instances for the slayer and often for those slayers near him.

Calamity can swing both Arm and Defense, and the black Ogrun’s Curse ability, Dismantle, and Repair all help the jacks out of a pickle when needed, strap arms on and finish off jacks. They do have ARM 15 and Tough, but I have only had one survive a tough roll so far, and that’s not really great odds on their part.

The best thing that Asphyxious provides, though, is Mobility, making sure that terrain isn’t a factor on many of the tables, and that his list can get the drop on most other lists without a real problem. 12″ is often much more than most heavies can threaten, and when I have that same threat range across the whole of the battlegroup, it can make committing for the opponent very dangerous. The big question mark around the Slayers and their efficacy into each list is the tempo I need to set to get the list firing off correctly. I can’t lose too many slayers in a single go, and I can’t commit to few to accomplish the objectives of the list. Its a precarious position to be in, to be sure. I think this is likely going to be the list I drop all day, if possible, because it is capable of playing into a number of different list builds with at least a modicum of success. We’ll have to see what lists the opponents bring to the table.

Asphyxious 1 Scourge of the Broken Coast

This list is build to keep players honest and make sure they understand that at any time, I can drop 40 troopers + support on the board. Everyone knows, loves and Fears Satyxis, and I understand. they are a great, accurate unit with the potential to feedback casters off the board if they aren’t careful. Asphyxious can spell assassinate many casters off the board, and if push comes to shove, he’s got great melee stats to back it up. Teleport isn’t a throwaway spell, and can give him a ton of flexibility when needed.

Parasite and Dark Shroud, in this list at strong compliments, and the list has three sources of Dark Shroud, one of which can be cycled. Its easy to rip down armor when you’re removing 2 all the time. In the right circumstances, blood witches punch up to P+S 17, and Raiders to a much less impressive 16. Blessed, Magic weapons all around also make those pesky incorp models a non issue for most of the game.

Both lists have ups and downs. One is low, valuable model count, and the other eats up the clock. One has attrition well in hand, and the other struggles with staying on the board all to long. its a good position to be in in both the positive and negative, keeping the opponents on their toes through the list selection process. I think that using these two lists, in conjunction, into the three factions, players and casters I expect to see could possibly give me a leg to stand on where I normally have no right to.