Well, Its been a long time since I’ve talked about anything other than Cryx and Warmachine here. I figured, with me finally, after almost 7 years of on and off play, beating Valkyria Chronicles, it would be a good break to talk about something different.

Released in 2008, Valkyria Chronicles is the first in a series of turn based strategy games released by Sega set in an eerily similar world to ours in early WWII.  Its 1935, and the Empire is at war with the Atlantic Alliance.

Gallia, highlighted in blue, is where all the action takes place. A Small and neutral country, but rich in the fuel stores of this world, it is invaded by the Imperial alliance. You follow along as Welkin Gunther, son of the famous General Gunther of the First Eurpoan war and co-creator of the Edelweiss, a tank extremely ahead of its time with many,  leads Squad 7 of the Gallian Militia on increasingly dangerous missions.

Spoilers follow, so if you want to play blind, stop here. Otherwise, both mechanical and Storyline spoilers abound.

I have a lot of hidden shame over this game. Firstly, because its a game that I broke my rules for repeatedly over the nearly 8 years since it was released. I played it on my Roomates PS3 when he bought the game and system, but I’d not gotten particularly far when he moved out, got married, and took all his awesome gaming systems with him, including the PS3 and Valkyria Chronicles. It took me a few more years to get a PS3 again, and then a few more to purchase the game again. Sadly, when I booted it up for the second time, I was not able to complete the game. I don’t really remember what derailed me, which is irksome, but I’d gotten fairly far along, just over half way through. This time, when I booted the game up, I was determined to beat it. I was assaulting a beachhead, Marberry shore, much like a D Day Scenario. Cannons to the left and right, a rise in the center that I could take and hold with the tanks giving covering smoke and fire to the troops.

It was a very good place to pick up the game again. It was a cinematic battle that required though and application of non- violent resources in order to win the day. It was long, and sometimes a pain in the ass, but it was worth it. I was hooked again and couldn’t wait to see out the story.

While the game is difficult, and requires thinking and some creativity in order to beat, it seems to first and foremost be a stylistic game.

It is, if I have read and heard right, one of the best executions of a cell shaded game that exists. It has an amazing comic book feel to its art and story, which quickly allowed me to get immersed not only in the games mechanics, but the story as well. There have been many, many times I have enjoyed a game more for its actual gameplay than any story it wished to tell. This is one of the rare few triumverates where story, mechanics and difficulty all hit me in the right spot.

This, is the Edelweiss, for example.

The art was great, the story was solid, if not the characters in it,

But the gameplay! That was the real treat. I’ve mentioned before that the missions were difficult, but the all were extremely fair. The game played by its own rules, and you could predict most of what was going to transpire on a given turn. The AI was a little terrible, sadly, but I often felt that if the AI was half as good as I thought it was going to be, I would never have made it through the game. Squad 7, like many militia units, would have been relegated to the dustbin of history.

While the Missions are the turn based strategy portion of the game, there is also plenty of upkeep to do to prepare for each engagement: Leveling up, Research, Squad Members, a News Reporter, and even audiences with the Regent.

The game breaks down each solider into a class, each with their own specializations, abilities, and weaknesses. How, where, and when you use these classes really make a difference in each mission, and can turn the tide of battle if you do something as simple as take to little, or to many, of any one class.

The classes they have are:

Heavy Tank:  – Edelweiss is the only one. He comes along on every mission, with a huge gun, multiple ammo types, mobile cover and a huge hit point sink. However, as this is your command piece as well, if Welkin  is lost, so to is the Mission.

Light Tank – About half way through the game they add a Light Tank to the roster, the Shamrock, with Zaka piloting it. This warmachine is a bit less awesome than the Edelweiss, but can move a significant distance farther, able to project himself into the battle more. You also don’t have to worry about loosing him, as he doesn’t immediately lose you the mission.

Scout: The lightest and fastest of the classes, they wield standard rifles and light armor. They often have higher dodge than most classes, and are able to cover massive ground in almost every mission, though they will need cover and a patient hand to avoid getting them killed.

Trooper:  For my play through, the main unit through the whole game. Medium armored, with personal machine guns, the troopers were able to storm through some of the toughest fire on the opponents side of the board while receiving little to no damage. The natural predators of Scouts due to their high damage threshold, as well as snipers and lancers who cannot perform covering fire or retaliate if they survive, I leaned on the class heavily in order to complete my missions.

Lancer – Anti Tank and anti armor troops, I always found these to be a bit less worth it than I wanted. With both the Edelweiss and the Shamrock, it was not often I couldn’t get around to the rear of a tank and one shot them. Later on, on specific missions, I would take another one or two to help out the ever present Largo. Armed with the Lance, essentially a bazooka, and heavy blast armor make them great for going against the tanks that were their favorite target, but their slow speed and low movement rate made them extremely vulnerable to anti-personnel Fire.

Sniper – My second favorite class behind the Assault Trooper was the sniper. With an extreme range and strong weaponry, it was often that I would rely on my snipers to carry the day against some of the stronger opponents. Given high ground where tanks can’t mortar them, they can rack up significant kills while being extremely safe. 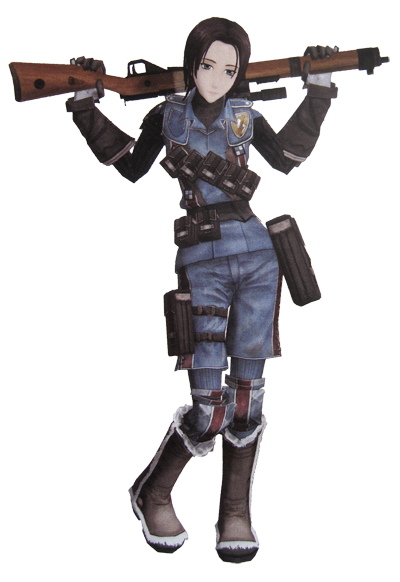 Engineer: Finally, there is the Engineer. speedy, with a steady supply of Mortar rounds, Blast Lances and Sniper Shot to provide the Tanks, Lancers and Snipers respectively, they are able to disarm mines, re-build sandbags and repair both tanks. A boon to every mission I took them on, I tried to not leave home without one! 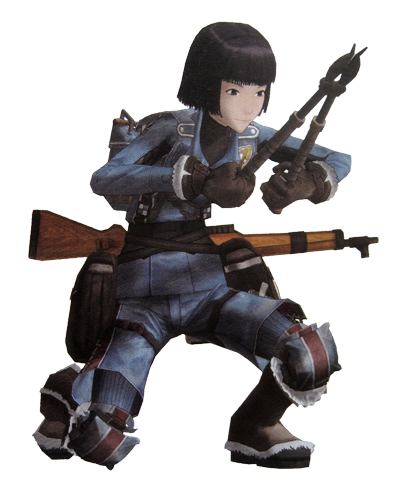 After each mission, you would be awarded EXP and DCR: Experience Points and Development Credits. These would be used to level up your classes, Research new and better guns or armor, and even add special abilities called orders to your pool. These would in turn make for more powerful soldiers and better equipped, so as to take on each new mission with a slight chance of success. The trees of research were interesting, and once I got a hang of what the system was trying to tell me, I made my decisions, equipped my soldiers, and went off to the front.

What is important with the game play of Valkyria Chronicles is that it is real time turn based. That is, when you are advancing across the field, if you cross an enemies field of fire, they will shoot at you. Well, Scouts, Assault troops and Tanks.

Yes, the tanks shoot at you if you’re not paying attention.

Prior to each mission, you get to choose your troop load out, perform some small deployment tasks, and then the mission starts. You’re given a pretty clear objective, which is often to clear the enemies camp and take it, but can be, from time to time, some other action that needs to be completed.

Each trooper you bring with you to the battle provides a single Command Point, which you can spend to activate one of your troops. Tanks cost two. you then have a move meter, allowing you a specific distance which you can traverse, and if you hit the right bumper, brings you into action mode any time during, before or after movement. In action mode you can shoot, use grenades (handy at taking out cover that soldiers are hiding behind because they don’t want to get headshot by Catherine) Heal, repair and a small number of other actions. Scouts get Rifle Grenades and Assault Troopers get Flamethrowers later on.

Getting a balanced 10 man squad to take with you is key for each mission, though leaning on the Assault troopers proved pretty strong. Making sure that you don’t run into Tanks with no Lancers, or troops with no Assaults is extremely vital. Finding the proper way to use each class to its highest potential is very important.

I heard recently on youtube that you can’t be done to play this game, and I think that is accurate. It takes a lot of thinking, an extreme amount of planning, and a bit of iteration to understand what is going on, but once you do, it is great fun.

Next time, I’ll talk a bit more about the game itself and some of the most fun I had while playing. This really turned out longer than I thought – they always do, it seems, so I can get that out of my system a little later.