No Bar to my Call

Whenever I see a new caster come out for my faction, I start poking and stabbing at them to see what makes them tick. Each new caster brings their own method of playing the game, and though each my not be terribly different from the others, almost every one of them requires you to think differently in order to bring the best models to bear with them. In some factions, like Skorne, there main difference is not what each caster brings, but how you apply what the faction does. Skorne beats face with almost every single caster, and each of them does it a bit differently. Zaal 2 brings a completely different tack than I am used to with Skorne – he feels like he was ripped out of the Cryx section.

Almost every Skorne caster plays melee, with each one taking a different look at the concept, but the focus, almost every time, is on the beasts. Skorne beasts are so good, and hit so hard, for such a reasonable price, that it becomes extremely hard to dislodge a significant heavy beast presence from the lists. Zaal 1, when I played him, managed to work it in because he has a feat that triggers off of dead warrior models. Zaal 2, interestingly enough, provides the same incentive, but in a turn by turn basis. His death has made him even more lethal in some areas while completely abandoning others.

And I Puzzled and Puzzed.

Playing new casters is an interesting test of your mental fortitude, because you have to be able to look at the possibility of success when you were playing the match, regardless of dice. For me and Zaal 2, that has been a miserable chore. His ability to swing the dice however I desire makes the prospect extremely difficult. I’ve done Several Iterations of the list for various reasons, but I think, finally, I have it down (within 5 points, good enough) . I realize that I’ve been lax in giving real world experince with Zaal 2 as I wound up to NOVA, but I’ll put some of my thoughts here on the table now, along with a mini-battle report from both NOVA and yesterday.

Both games I played the same list, the one I came up with prior to NOVA. I really felt confident with this list in a way that I’d not prior, so I want to take a look at how the list evolved, and why, over time. (about those battle reports… )

This is the first out list, and its experimenting with a bunch of different things at once. Praetorian Swordsmen are maligned, and I wanted to give them a chance to prove themselves, and the same goes, personally, for the Venetor Slingers. Hakaar and the three Guardians were there to benefit from the feat, heal, and provide bananas transference targets. Immortals were there, as well, in order to take advantage of the feats bonus armor and boosted to hit. Nihiltors, Beast Handlers and beast load out all are self explanatory

After the first game, the Slingers came out. I was extremely displeased with their performance, as they simply died without even doing anything. Less than nothing, honestly, as a few were outside of my Reclaim area. I won that game, But I wasn’t confident that I would be able to do it again, given the chance.  I was also pretty sure that I could get away with taking out a single Ancestral Guardian, as he never really wanted to give up souls enough to fill up all four. I replaced the slingers with Bloodrunners, saving a point in the trade, and added in both the newly spoiled Immortal UA by dropping the Paingivers to min. I wanted a similar amount of souls, and felt that some AD presence would be useful for early souls. I wasn’t wrong, but I really didn’t feel that 5 points for 6 models was going to be worth it in the long run. The Immortal UA was interesting, but never got any souls on him to do anything with. It was sad.

It was around this time that I started thinking about using solid, aggressive combat solos to make more use of transference, and it also lead me to the conclusion that Immortals are not good with him. His main use is as a transference and spell battery, with the occasional melee beatdown at the hands of 20+ fury. That leaves very little room for him to have models that don’t grant him souls when they inevitably meet a glorious death. To capitalize on the solos, but keep the soul feeder the same, I traded out the Immortals, UA and Ancestral Guardian for Zaadesh + Scarabs, Paingiver Bloodrunner Master Tormentor and the Tyrant Commander. I really enjoyed that list, but there was still that lack of oomph at the end, leaving me feeling like I had no chance if I didn’t win exactly when my opponent obliterated the vast majority of my forces. Its a concept that is hard to imagine working, harder to execute, and even harder to imagine relying on. 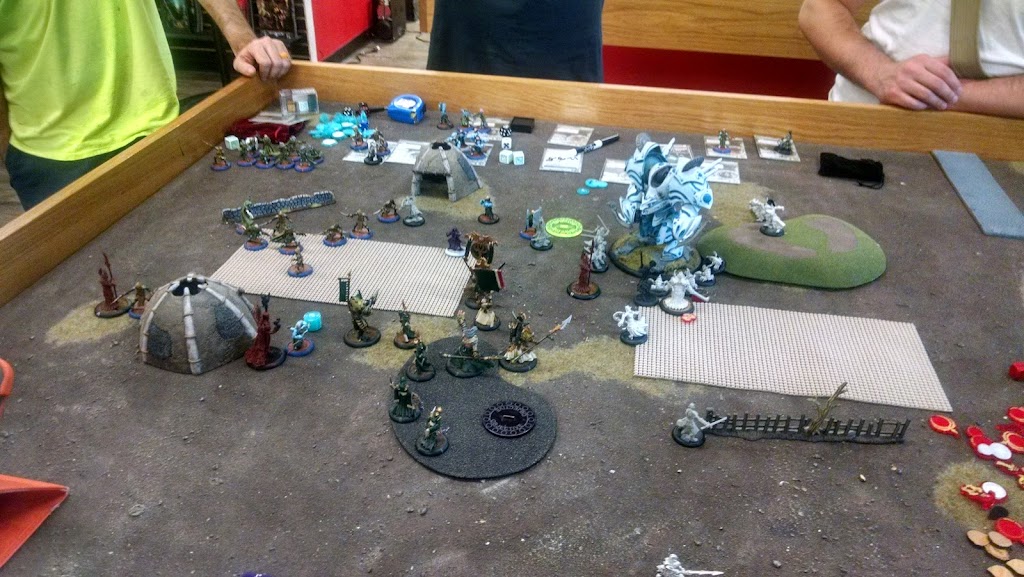 The High Point of Zaadesh’s carreer

It was at this point that I had a conversation with a friend who’d mentioned Arcuarii in his list. I scoffed at the limited amount of souls provided by that unit. He countermanded: I was spending 8 points on a single soul (zaadesh) that could, at most, output four pow 14 attacks with three dice to damage. For a single point more, you get six (!) potential pow 12 attacks with four dice of damage! the math was, honestly, right there in my face. I immediately abandoned the Power Solo concept. Arcuarii were the way to go forward. But, I still was disappointed in my soul count. With only 25ish souls, I had been loosing somewhere around 15-18 during the opponents push turn. This would leave me with few models with which to relaliate with, and it felt like I was trying to finagle a way to actually get the win every game. Wouldn’t it be better to have two turns of push?

This lead to to re-evaluating how to get the most bodies into the list, that could last for a while and also make use of transference in the best possible ways. The Praetorian Swordsmen were quickly pulled out and replaced with Keltarii. One of the problems of a giant, unit based, melee army is that you can get tangled up real quick. Praetorians can do work, but require two attacks, both at MAT 6 to hit, and side step to still be around in order to make it all work out. Not only are Keltarii immune to free strikes, they also have reach and reform, allowing them to not only disengage themselves from any jam, but they can clean up second jammed unit as well, allowing them to advance. Combined with the fear of using transference to clean up annoying solos, and you’ve got a pretty solid front line.

The bloodrunners, too, were pulled, along with their Bloodrunner Master Tormentor, and were replaced with slingers once again. I didn’t intend them to do much, they are just cheap souls with ranged attacks that might, one day, hit a barn (or, it turns out, do butt-loads of damage to Zaal2 in the mirror). the point that was left over was shunted over to add to the points gained by moving Zaadesh out of the list, and his scarabs, and replacing it all with Arcuarii. I was pretty sure it was the last version I would need. Arcuarii, wandering around the backfield waiting for the enemy to kill all the screening models so that they could be unleashed was going to be awesome.

Then, the days before NOVA, I was chatting with a friend and we discovered all the glory that could come in from pulling the Arcuarii out of the list and replacing it with a minimum unit of Cetratii and bolstering up the paingivers once again to max in order to boost soul count. Swapping over to Cetratii gave Zaal a terrifying bunker to hang out with. 4 Cetratii in front with an Ancestral Guardian anchoring either side (cool little defensive strikes if they want to come in on the cetratii, and a Tyrant Commander to the far right/left, depending on where the fearless units are. This brick really gives Zaal something to rumble forward with, daring anything to try and crash against it, but it also gives a very scary zone clearing and model clearing threat. Pow 11’s with four dice while retaining shieldwall and 2-8 attacks at mat 8 pow 13 with 3 dice damage can clean up.

That game I played last night, with Zaal ending up beating Zaal to death, was with this list, and I twas a blast to play. I felt extremely secure moving forward in my zaalbunker, even with an Aradus Sentinal on the other side of the board. Arm 20 is pretty solid. 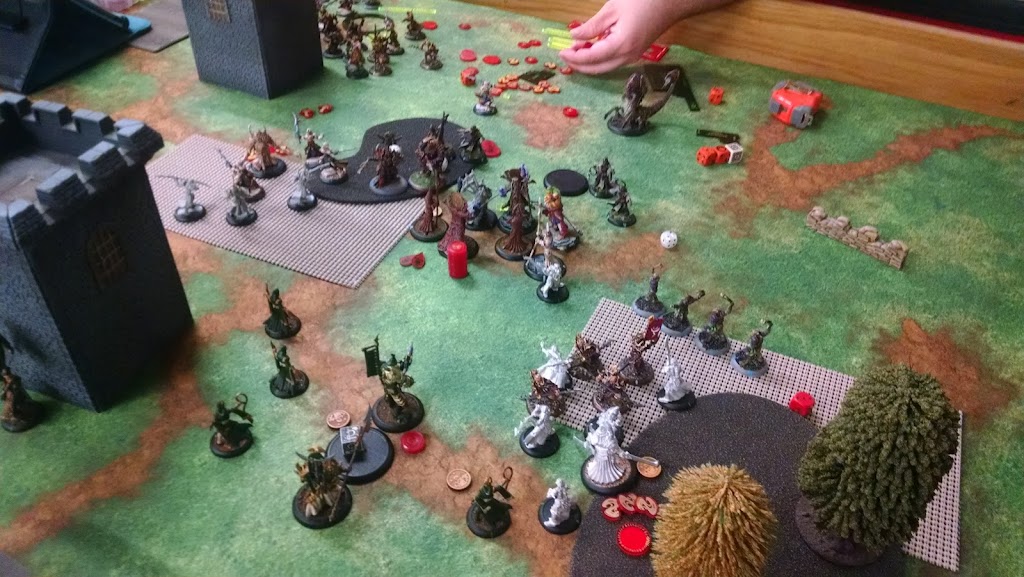 Then, my friend I had played against suggested one change that I have to figure out: Getting the Krea in there. Making the Cetratii def 14 arm 22 is one of my favorite things to do, and Zaal punching up to Arm 20 before transfers is just solid gold. Now, to find one more point to get swamp gobbers into that bunker, we will be all set. Offensive Zaal2 bunker, go!