The last few weeks have been pretty rotten to me in terms of being on a regular schedule with writing. Sadly, I’ve come to a grinding halt with the Mythology Monday articles, because they are extremely hard to write on top of the fact that I don’t know that the provide me anything necessary for the world I am assembling. Combined that with a couple emergencies and family days out, and its been exceedingly hectic throughout the month, and that it looks to be getting worse, not better.

The upside to all of this activity is that I’ve been storing topics and I’ve a number that I’ll be talking about when I get the chance. In preparation of XCOM 2 coming this fall, I’ve decided to try and experience Marathon Mode in all its hellacious glory; I think I’ve talked about it but I’ve recently beaten Dragon Age: Inquisition; I’ve been grinding away at my D&D players will to live, and I’ve picked up the brush and started painting more casters, most recently Zaal 2 and Morghoul 2.

So, I’ll get back in stride as soon as I can manage it, though NOVA and Brawltimore Scheduling will undoubtedly prove to be obstacles. Until then, though, I’m just going to be tossing out what I can, when I can. Today is gonna be a quick rundown of a game I played with Zaal 2 against Garryth.

Titan Tuesday, our weekly group of Warmachine and Hordes players at, surprise, Titan Games and Hobbies here north of town, has been growing steadily. With a tepid beginning of only three people, we’ve had modest growth to around 8 over the last three weeks. I don’t expect this to last, being a pessimist, but I’ve a little hope. Four are new players, which bodes well for the game, with another 5 or so veterans who come when they get a chance. Last week, I played against a guy who has been playing for a while, but was only able to just now get out to a Tuesday game. He brought a Garryth list and I dropped down my Zaal 2 list with a few tweaks that I’d made after thinking long and hard on a couple key list building decisions.

Building on the Grind Style of game play I mentioned last week, one in which you calculatedly slaughter your own army in order to press forward by measure, slowly attritioning away the opponents advantages while taking advantage of your own inevitable press of numbers, I changed the list up just enough to be able to push with a few key solos. Rhadiem, Zaadesh, and a Bloodrunner Master Tormentor were all added to the list, as well as a unit of Scarabs for Zaadesh to control. I’d considered the benefits of a single or even pair of Reptile Hounds, but I abandoned it for the potential bevy of P+S 16 attacks that I could make with the Scarabs.

I’d forgotten until the day of the game, as I was leaving in the morning, that I’d traded away my Rhadiem on a paint exchange years ago, and no longer had him on tap. In haste, I made a simple swap out for the Bloodrunners to capitalize on the Bloodrunner Master Tormentor that I’d already taken. I was positive that the list was weaker in this configuration, but I didn’t particularly have the time to sit down and analyze another list. I haven’t since then, either. The final list ended up looking like this:

This list has only slighly less souls than I’d tried to force in some of the other lists: 28 instead of 30, but it comes with a more diverse application of force than I had prior. Bloodrunners can either lead up the center and jam or take an unprotected flank, Nihiltors can thresh units of infantry, and praetorian Swordsmen can take up the slack where needed. The Bloodrunner Master Tormentor could, with the help of transference, easily pick of a useful solo or two, and Zaadesh was going to be the experiment. My only concern surrounded the removal or containment of a single colossal or a field of heavies, as the army just didn’t look to have the punch to break through that high amount of both armor and HP, but Maybe Zaadesh and his scarabs could output enough to justify their inclusion. 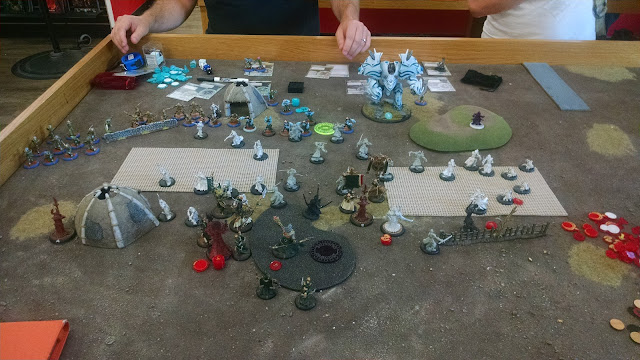 You’ll notice that I really, really botched doployment and round 1, pulling a full half of Zaals army out of his control area and unclaimed by an Ancestral Guardian. Thankfully, that didn’t end up coming into play, but it easily could have, and I would have ended up regretting my foolish decisions.

The Shaman and Raider proved their usefulness once again, cementing their place in the battlegroup. Eiryss 3, The Magister Guarding Garryth, and a Mage Hunter Assassin all fell to the Precise and benefit ignoring shooting of the Skorne Empire, keeping Zaal active and in play longer than he would have otherwise.

I was trying to test out the Grind concept, but was unable to even get it off of the ground due to this worthless unit called the Mage Hunter Strike Force. Maybe you’ve heard rumblings that they exist. Sadly, the truth is much worse than rumor, as they took out a full third of my army by themsevles. Thankfully, they had to group up in order to do so, and were some 12″ from Zaal 2 when they did it, but the effect was still the same – A large portion of my army just torn out of the center of my army.

With 19 focus, I knew that I had to push this turn. I didn’t have enough models to outlast even Retribution at this point, and there was a colossal that was ambling into position in order to take Zaal out of the game. My fears were coming true. Zaadesh was waiting in the wings with his scarabs, though, and he was not to be counted out. Charging in with two scarabs and two Praetorians, I was able to put a few boxes of damage on the big guy before Zaadesh himself charged in. With Tag Team Up, he was pulling P+S 14 attacks, and with Transference granting him weaponmaster after the charge, he rent a huge hole in the side of the Hyperion, allowing Hakaar and an Ancestral Guardian to get in there and make the final push to take down the monster. It had taken 15 weaponmaster attacks, but it was done, and the Hyperion was only a wreck. 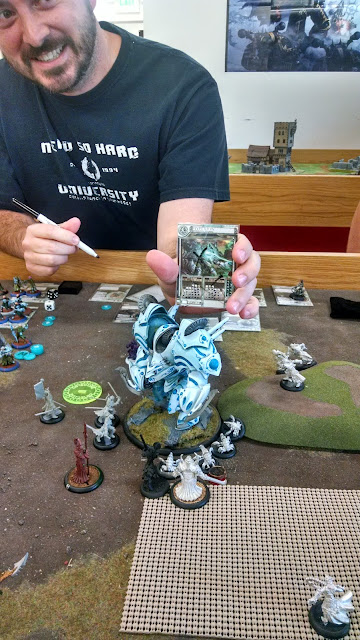 I keep track of this shit, because I’m not a good person.

I Popped my feat that turn, and moved in on the Mage Hunter Unit, taking 7 out with an annihilation and consuming their souls. Eiryss three also died on that turn, making it safe for me to even play as far forward as I did. Sitting on top of armor 23 with multiple transfers, Garryth chose to make me roll the dice to win the game, and came barreling in on a run order to engage the stone vessel in combat under full camp. Zaal with 17 fury was staring into a cannon. If he failed to kill Garryth, Zaal would in turn be slain. Def 16 and Arm 20 are intimidating stats, but I had no other choice. Boosting to hit on every attack, I connected with the first two, and did 8 damage dropping him to half life with boosted damage attacks. The next two attacks missed, putting me against a margin of error I don’t like contemplating. The next Three, however, all connected true, with boosted damage on two of the three. The final damage roll, unboosted, needed an 8 to kill. 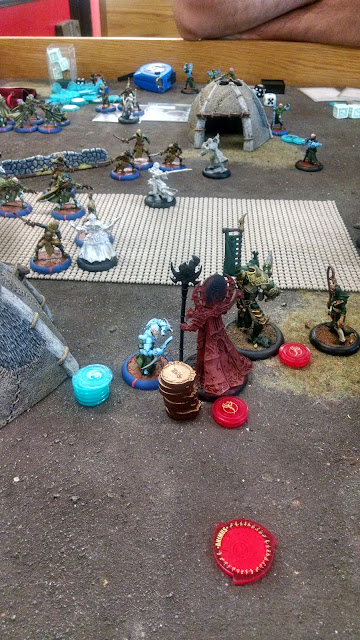 I will say that I really like Zaadesh, and taking the Immortals out didn’t feel as bad as I thought it would. Overall, the list could use some tweaking, but it feels like an extremely solid list that could handle a variety of obstacles, none the least of which is my ineptitude. I think, honestly, I am going to give it a go with Keltarii, though I don’t know which unit I’d end up swapping it out for!