I have a very large, seeping soft spot for Malifaux. Sadly, I can’t tell if its rot or love, but there is just something about that game that gets me. I enjoy the (old) art style of the Ortega Crew, and I very much enjoy having guns, for once, though they seem to not be overly effective. Maybe its me. Its probably me.

However, I recently dipped my toes into the game once again, and the the experience was rewarding! I won’t be looking to set aside time to play the game, but I’ll definilty not shy away from it as I have been.

Many weeks, I do go out of my way to play Warmachine, and I’ve gotten a ton better at getting games in with the thousands of dollars of miniatures that I own. However, there have been a pretty solid chunk of miniatures that I have sitting around that are worth their own hefty price and have been foamwatching for a long, long time. Infinity, Relic Knights and Malifaux are games that I particularly have a plentiful quantity of miniatures that really need to see some table time. I was able to secure some time last week to sit down and break out a crew that I’d been building for a very long time but had never managed to actually use.

With the introduction of ME2, they expanded their concept of cross-faction masters, and Guild picked up McMourning. He’s a melee monsters with a ton of cool combat tricks that can really get around the board, and I’s been interested in taking him with some Guild Guard models that might be able to take advantage of his strengths 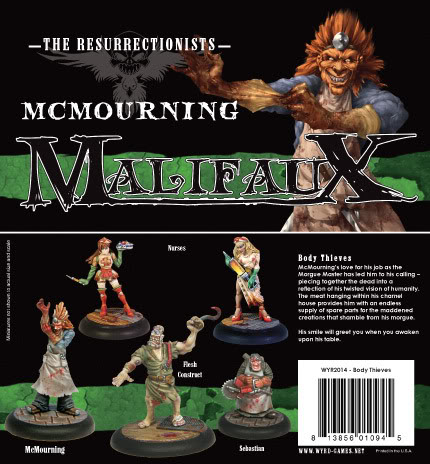 I’m sad they did away with this sculpt.

. I’d gathered them up and put them aside for the one day I might return to play.

I was able to line up and play two games, which was really cool. However, I was unable to finish either game, which was very, very uncool. It is, I will admit, my fault because I don’t know any rules anymore, and had to constantly refer to my cards, question how things work, and have basic concepts explained to me. This ate up a ton of time, and forced both games to be called at the start of turn 3. Not the best.

However, I did get to look at schemes and strategies, figure out how they work and how they were going to cost me the game, and then shuffle it up and try again. It was extremely enlightening and made me appreciate the level of detail they put into their win conditions. Between games, I made sure we flipped over new Strats and Schemes so that I could get a little more familiar with them. Many times I won’t completely understand a scheme or strategy until I’ve been able to see how it works on the board. I am pretty solid with words, but sometimes, comprehension just escapes me.

While both games allowed me to get a better grasp of what to do at the start of the game, and how to proceed, there was one thing that really just got stuck in my head over the course of the last few days.

I’d heard, from more than one player, that Malifaux is a better competitive game than Warmachine. I may disagree, but I never could put my finger precisely on it. I knew it had something to do with the cards, but I could never really force it to the fore of my brain. Well, three years in, I think I’ve finally pinned it down.

The Randomness in the cards, as opposed to the dice, is more under the control of the player. To some, that would indicate that Malifaux is a more competitive game due to the fact that a better player with better knowledge of the decks and the ability to count cards and maintain those numbers deserves the edge they have in putting the opponent under. I get that argument, but I don’t agree that it makes the game more competitive. Instead, what it does is reward good players for being good, and punish new players for being new. Warmachine has this too.

However, What I enjoy about Warmachine, and why I think that it is a much better competitive game system is that they reward two different skills and/or talents. Malifaux rewards execution. The game enables you to make sure that you are able to execute your plan, with your cards and abilities, in a stronger and more dominating manner than the opponent. There is only a 1 in 52 chance that your cards, provided you know your not fishing, come up poorly. Conversely, I feel that Warmachine rewards adaptability. When the dice fail you, and they will fail you, what is your plan for recovery? How do you maintain your composure, regroup and push forward into the win in spite of the setbacks you’ve encountered. To me, one of the greatest achievements to Warmachine and Hordes is pulling off that surprise assassination in spite of a few die rolls going against you. One in which you have to adapt your plan and start tossing caution to the wind, trying to make the assassination or win the scenario game.

While it might not make a perfect analogy, I think the concept is solid, and I’m going to run with it as my explanation until I find a new one!