This is the Third of a series directed at new players, but hopefully with some nuggets for veterans and journeymen alike. This is a post about my opinions on Cryx from the vantage point three editions and dating back to 2004. Today I’ll take a peek into our five themes, and how they shape what we play.

In the first two articles, I walked through what to expect from the faction, and then what the fulcrum of our faction – Warcasters – do. Now I want to walk along the method of starting along the path to collecting and using an army – Themes.

Themes, as they exist in this edition of warmachine, are both the foundations for and the building blocks of playing the game. They are both the Inmates and the Guards. They limit what you may take, and they give you bonuses for being limited. While it is possible to play out of theme, you are very often playing with a slight handicap, as almost every other person you play will have the bonuses from themes. Playing simply anything in the faction with anything else in the faction isn’t possible any more, and while I wish it was the case, It sadly is not.

Instead, we have to play what is contained in each theme with each other, with the possibility of adding additional mercs with Unit, solo, and/or Battle Engines. Each theme give a limited palette of models to select from while building your army, from warcasters you can take, units and solos you can take, and even the warjacks (though often it only limits you to non-character warjacks) you can pull into your lists. In return, you are granted, generally, three bonuses.

First (almost always) you get a free model bonus, which is generally worded so that each time you hit a specific amount of points being spent on a specific, even further, subset of models, you get a free thing. Sometimes its a solo, a unit attachment, a weapon crew or even light warjack.

Second, you get a buff, often to your units, but sometimes to jacks or casters. This is a rule that you get to use during the game.

Third, you get a list building/pre-game rule. This will often dictate to you certain models you’d like to take, how you deploy, or if you go first, and can include terrain.

Now, lets take a look at the themes we have available to us. I won’t be talking about their power (just yet) but I’ll make generalist comments about the current state of popularity. I have done some handy, deeper dives into some of these (and I’ll note them), but I’m going to talk in broad brushstrokes. Soon enough I’ll have a look at each of the themes in detail to help people out.

We have six themes:

Each of these themes has a specific play style, certain model availability, and specific bonuses that help you play the game. Choosing which one – and then sticking to those models and units until you want to expand, will greatly help you learn your models as well as not waste purchases and money. 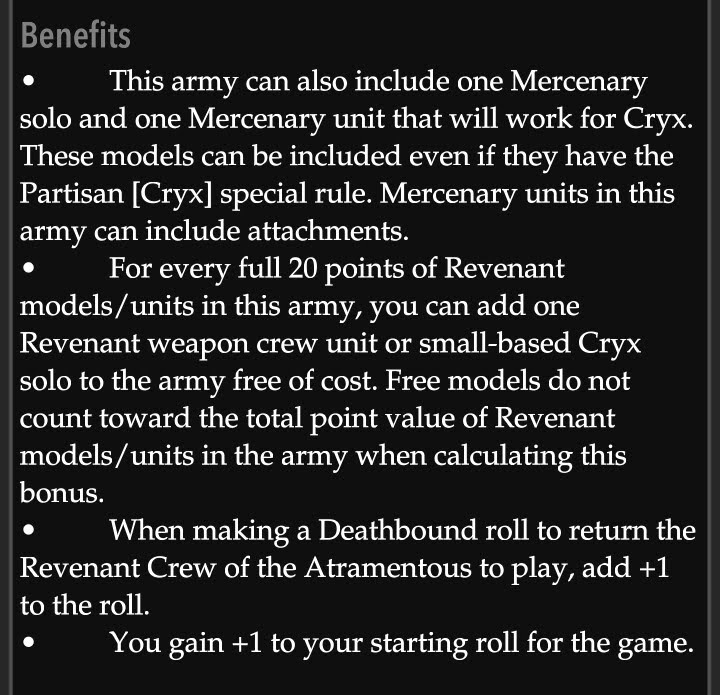 The Ghost fleet was massively popular for a while, and consists of ever-returning undead pirates, and often times that is enough for people to enjoy. While it has the most restrictive unit selection, it’s pretty lenient in allowing both the Wraith Engine and a number of strong and powerful solos in them, allowing for strong and thematic builds that come at your opponent from different angles and with a variety of threats, and going first more often than not helps put pressure on the opponent early.  Unfortunately, that means the buy in to this list is both exclusionary and repetitive, as you’ll often decide to go with three units of Revenent Crew of the Atramentous to get the most out of the themes big rule, the +1 to deathbound roll. This list has a low initial hitting power, but can easily ratchet up the damage through caster debuffs and the Wraith Engines Dark Shroud. It does have specific weaknesses, namely that if the Unit Leader of any unit is Removed From Play (specific rules will do this, but only when it explicitly says so), the recursion stops. Blackbanes Ghost Raiders doesn’t even need to be RFP’d, he can simply die to stop the recursion. Its a cool and fun list, but it doesn’t have a ton of crossover with other lists, though few do to be honest, and requires a large investiture in a single unit which can be daunting.

Play this theme: If you like zombie pirates, ghost pirates, giant wraiths, and overrunning your opponent with a nearly endless tide of both. 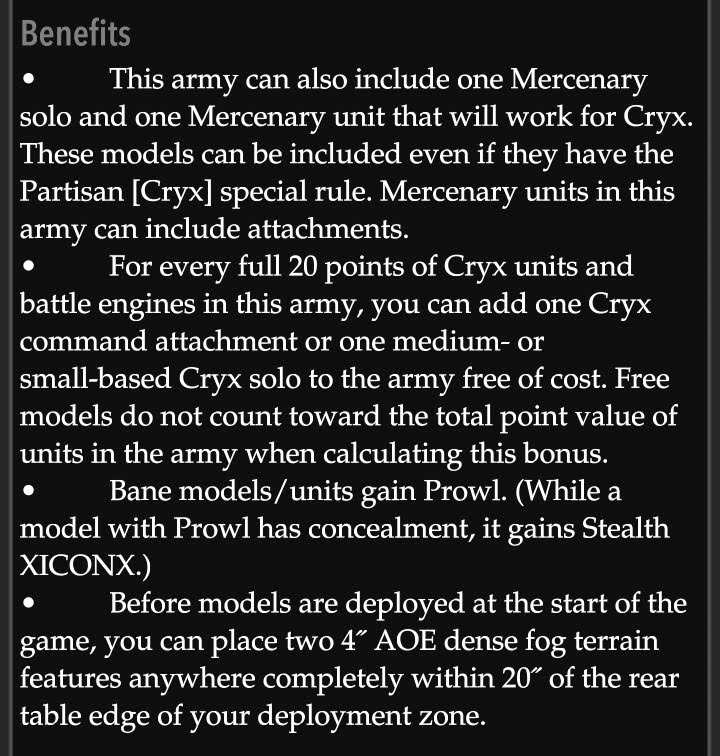 Dark Host one of the favorites of mine because the Banes are, and have been since day one, a strong unit that delivers a massive punch. The models allowed in this list are pretty broad, with three different main line units tho choose from. It also allows the Wraith Engine, which is nice crossover from the Ghost Fleet. The list is moderately one dimensional, however, because even though it hits extremely hard and can drop many heavy armored targets, it can be slow without a conscious effort to counteract it. This list can take a lot of different angles, and while I don’t like armor getting in my way and this list makes sure that it never, ever does, it can also be built to mulch infantry and out-swarm your opponents lists. Be wary of casters and factions that try and control you, because with their limited speed they often can get jammed into place if you aren’t paying attention. Prowl helps the army get there, as all banes ignore the movement penalty for terrain and can safely hide in it while not being hindered on the offensive the following turn, and stealth is a pretty solid, though often unreliable, defensive mechanic.

Play this theme: If you like traditional undead, crushing armor beneath your feet, a different unit for each task, and a safe place to hide your caster. 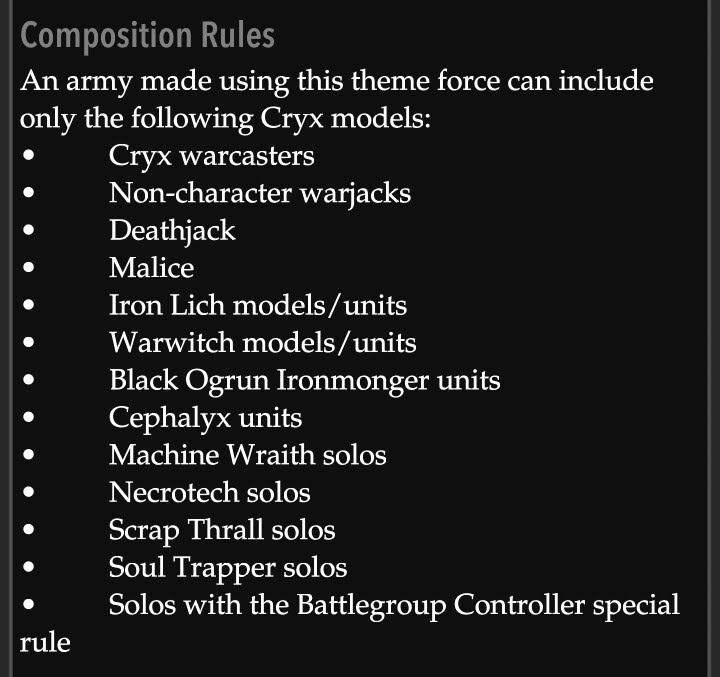 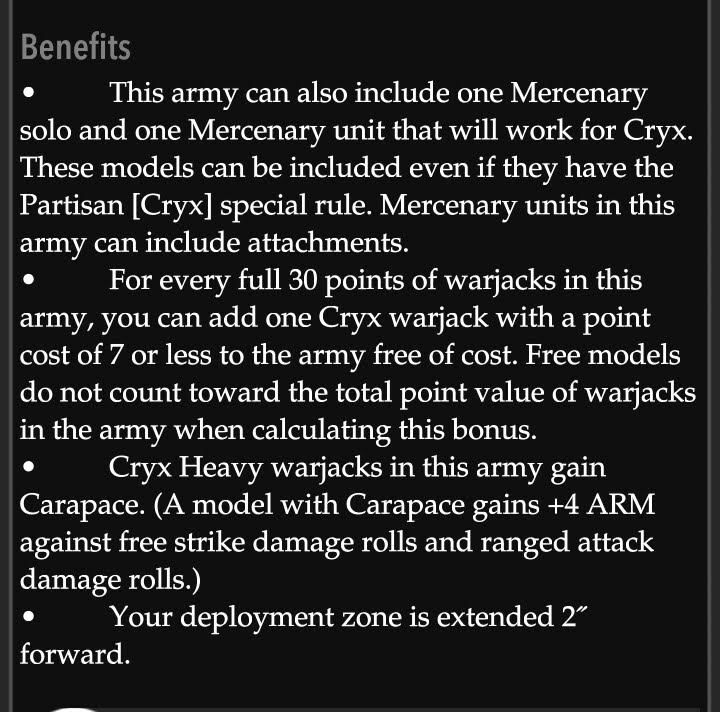 Black Industries focuses on the Jacks of Cryx, and has the most overlap with other themes, because jacks of almost any stripe are allowed into every theme. This theme grants a huge boon to Heavy Jacks in the form of Carapace, circumventing our greatest weakness, getting shot in the face and having its arms and legs fall off. This is definitely the theme if you like your big, stompy robots. This also is the theme that allows the Cephalyx, though you can already access the cephalyx, due to them being partisans, in every other theme, so the only benefit here is that you can take more than one unit, and you’re likely to try and do that with the Overlords, because they are extremely good. Cryx jacks are fast, fragile and can hit with a rather reliably high power, though not often repeatedly. That said, more jacks can make it through more often in Black Industries, and its the first time that I feel really comfortable playing a bunch of jacks in Cryx, with the Free light jacks providing either support or arcnodes to whichever caster needs it. Its a versatile list, though one you need to have experience piloting a small number of highly valuable targets to get the most out of, unlike anything else that Cryx runs.

Play this theme: If you like Cryx Helljacks or Cephalyx, and want to watch them create mayhem everywhere.

Scourge of the Broken Coast 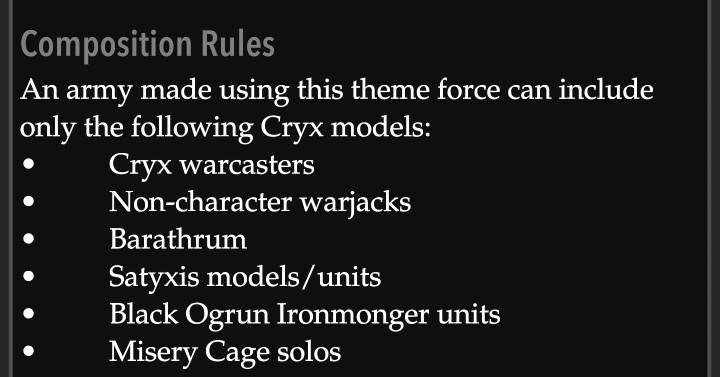 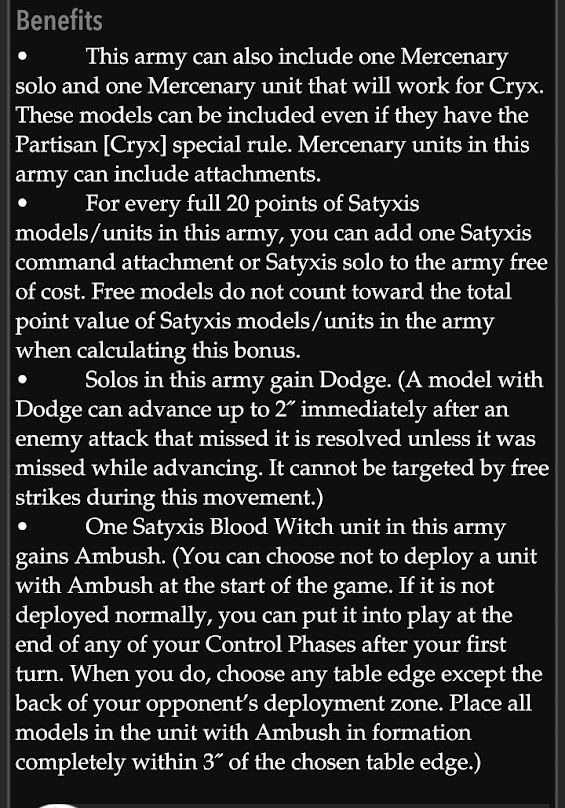 Scourge is the Satyxis theme, filled to the brim with fast, fragile, and hard to hit models. The model selection is pretty sparse, but the models it does provide can do a ton of different jobs when called upon. It grants a small bonus to the solos, but also allows ambush, one of the best rules in many scenarios. This list is extremely fast, boasting a host of models that have great threat range, through their innate speed and reach. They are, in general, more expensive than other models because of their better defenses, higher accuracy and multiple attacks, more than is normal in a Cryx army. With innate MAT of 6 and gang on most of the models, they are easily hitting high defenses and preventing themselves from being hit as well. given good terrain and strong positioning, they are able to survive all but the most accurate shooting and then shred the opponents they get in contact with. Its an intimidating army to stand across from, especially because of the Raiders special rule, feedback, which can easily kill an unsuspecting warcaster.

Play this Theme: If you want a fast, living army of raiders that can easily close with the opponent and then blend their army be it warjack or infantry. 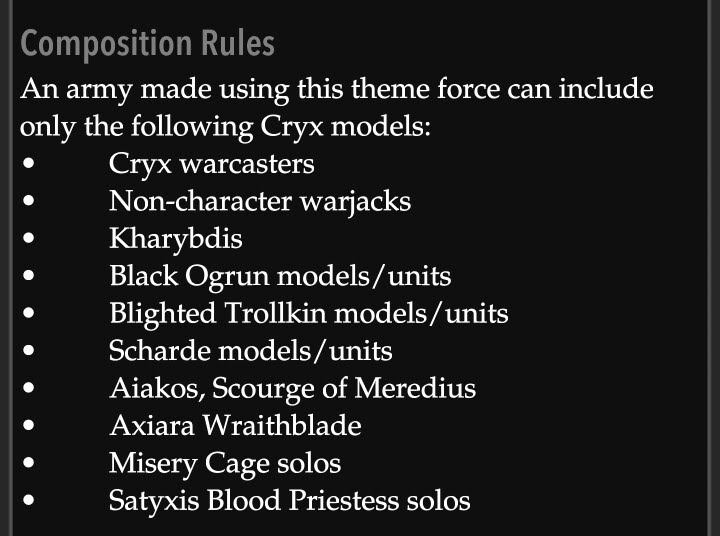 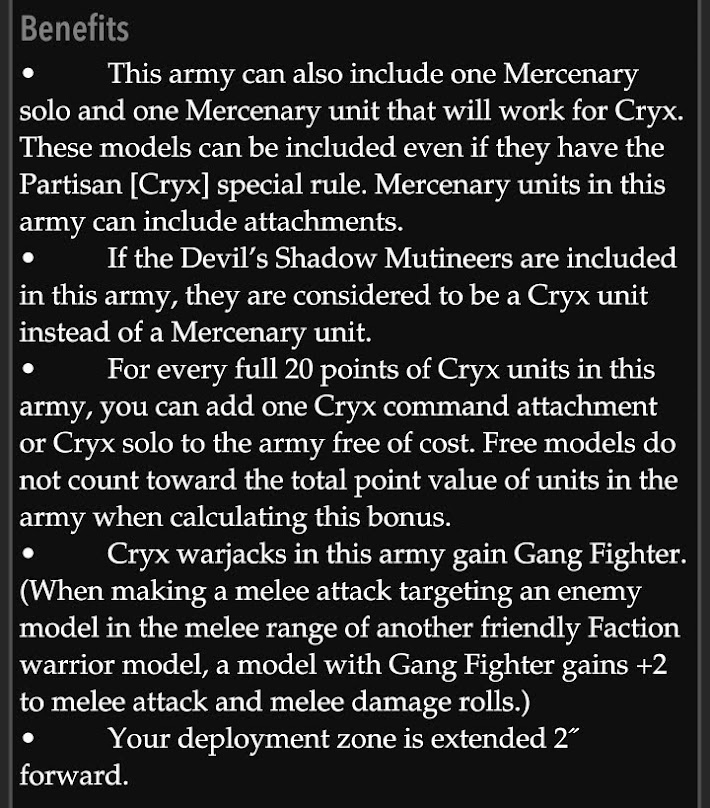 Contrasting to both the Scourge and the Ghost Fleets, the Slaughter Fleet Raiders are the misfits of the Cryxian Pirate crews. Trolls, Ogruns and humans who’ve abandoned their humanity all work together in a single theme of rapine destruction. This is easily the most permissive of the themes, having variety that nothing else can match. Two different troll units, three different units of ogrun, and two units of human pirates. Its a hard hitting and durable army, able to take on opponents with multiple different list builds. This list is also the newest, as many of its units and solos aren’t even released yet, so the greater world hasn’t really played against this, or build lists for it, too much. It looks like a massive generalist list that can do nearly any task solidy. What it is going to lack, though, is recursion and speed, which is often fine as they can flood the field with hearty troops who hit hard and accurately.

Play this Theme: If you want to play a horde of barbaric and monstrous infantry who ride a wave of pillage and plunder, who are likely surprisingly durable as well as accurate. 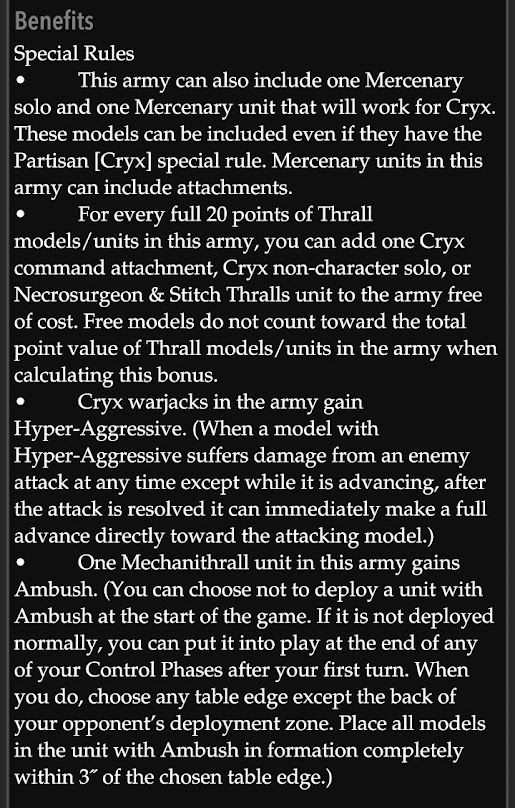 The last of the theme lists is the shambling, wandering horde of Cryx. Made of the most expendable and easiest to kill models, as well as providing the ‘Jacks with one of the least applicable, yet occasionally useful, rules, this is a combined arms list that takes swift moving jacks and troops to flood the board with recursion and models. You can easily build a list with 50 models on the board, and often that many models will overwhelm an opponents ability to deal with them in a timely manner. This list focuses on returning these models back to the table over and over again with necrosurgeons and benefits greatly from the Sepulcher colossal. These models require a lot more babysitting, in terms of buffs and debuffs from either support models or the caster, than many other lists, but thankfully, that is something that the Cryx faction can provide in vast quantities.

Play this theme: If you want to play a shambling, endless zombie horde interspersed with swift moving jacks and powerful necromancers.

Now that you, hopefully, have a theme or two that you want to play picked out, an idea of what warcaster you want to use, and a pretty basic Idea of the faction, next time we’ll take a look at our Warjacks, as every army has to have a battlegroup, and often its the second most critical choice after warcaster you make when building a list.