So, a while back I posted that I had acquired a box of Bane Knights from a friend, and that he’d gotten the better end of the deal.

I’m not so sure now.

Once I started cleaning the bits and getting them ready for general assembly, I decided that I wanted to do a shield swap. Not really knowing where to start, I headed over to the Privateer Modeling and Painting forums, and asked them what was out there. I got some really cool options, but what really struck me was Scibor Miniatures spartan shields. With my degree in classic history, how could I resist! Now, armed with a shield swap out, I was emboldened. What else was out there? I found, again on Scibors site, Spartan helms. Sure they had heads inside, but I could drill them out, right? I could make them work. Now I was in a bind. I had spartan shields and spartan helms, but the bane lances of the bane knights didn’t fit the theme at all. I needed a good, solid, no frills, spartan spear.

At the same time, I was selling off everything I had left of my GW stuff. Among that lot was a huge bitz bag, some pound and a half of plastic parts. Among those parts were these spears: 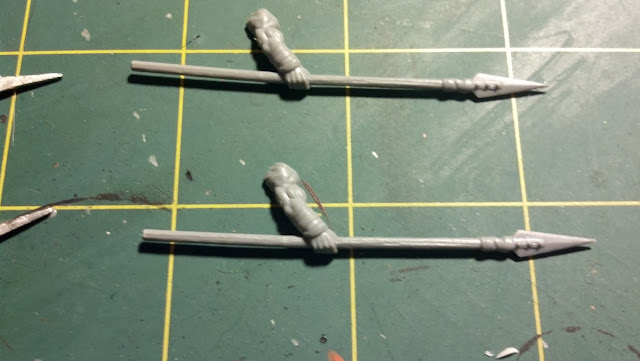 They seemed perfect! I only had 8 of them, but how hard could it be to get more? I’ve got a post out there on bartertown now with a pair of leads, so here is hoping!

Now I’ve got everything: Spears, Helms and Shields. Time to get to work!

I had to drill out the helms, which was easier than I thought it’d be, but still no simple task. The Scibor resin is extremely soft and I would have been disappointed with it in any other circumstances but having the soft material was useful, as it allowed me to cut the helmet down fairly easily. Once the hole was drilled, I carefully cut out the face using my hobby knife. I then shaved as much as I could out of the helmet, making it as thin as I could, so as to fit on the bane knight heads. 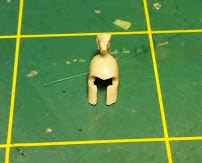 Grabbing one of the Bane Knight skull faces, I tried to stuff it in there. 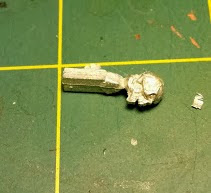 The head was too big.

I was a little stuck, but like any good, determined nut job, I went with plan B: cut the face off. I’d expected something like this, though not as extreme, and figured out the basics of what I wanted. Cutting the face off was difficult, no lie, but nothing I couldn’t do. Well, except that once face that I had the clippers on backwards, and the face completely shredded.

Sadly, even the face clipped off was to large. I ended clipping the forehead off, both cheekbones, and even some of the eye socket. Whatever it took to get the face to fit in that head. Thankfully, I never needed to take away any of the defining characteristics that made it a face. 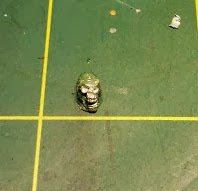 I had the face all cut and ready to go, and I shoved it into the Helm. The skull face was a little far back, but I figured that that would work out just fine. I kept trudging forward, drilling holes into heads and cutting off faces. The third one, I managed to get perfect. 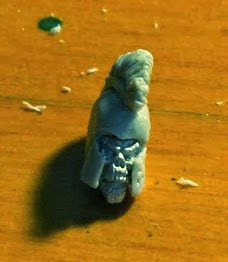 Damn it. That meant that I had to go back and do the rest of them correctly. Ah well, the price of a coherent unit!

Once I got the heads drilled out, I had to build necks. I’d completely missed that neither the faces nor the helms contained them after I was done chopping them apart. The necks took some doing, but with proper green stuff blobs, they lifted the heads so that they weren’t sunk into the chests.

With all the heads mounted on the bodies, I did the easy part next: Shields. I clipped off the spike that held on the bane knight original shield, and slapped on the Spartan lambda shields. Done!

this next part was the second trickiest because I’d only done it once on a much larger centurion warjack. I clipped the bane lances off the hands and gingerly drilled through the hands to be able to line up the spear shafts that I had clipped off the Ungor hands.

Once I’d gotten the spear arms ready, it was all over but the posing!

I only got the first set of heads, which allowed me to get the 6 members of the minimum unit finished. Once I get the rest of the spears and heads, I’ll be on track for my Bane Spartans!

Oh, and of course, I have to do nice bases on them, so I just had a friend order the Forgotten Empires bases from Dragonforge. because dead spartans of a forgotten empire make only the most perfect of sense.