Technically, its February. This’ll count as our update, though I expect I’ll have one later on when I’ve finished the game sooner rather than later. My character is getting long in the tooth, at level 87, and I’ve crested 50 hours. I only expect this game to take between 60 and 70, with another 15 or so for each of the DLC’s.

I’ve managed to take down a few bosses since we last reported in, not even that long ago, and the build I’ve embraced – The Bandit Knife Bleed Build – has really taken off. Once I got to the point that I had an upgraded, +10 Blood Bandit Knife, I’ve been simply having a blast taking down simple mobs in a way that I was never able to do in my last two builds, with two or three quick hits. 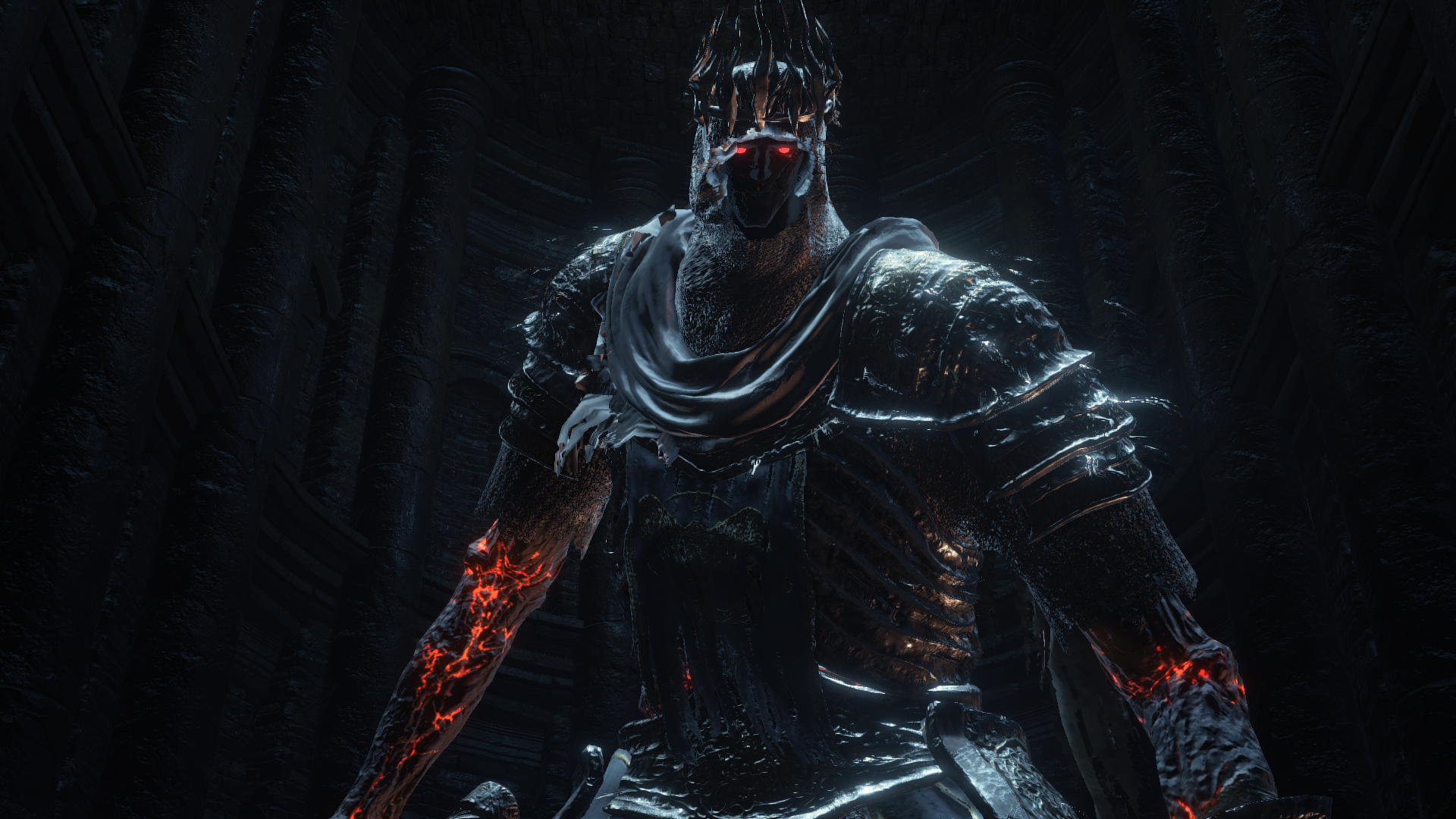 The first boss I encountered after I fought the pontiff was Yhorm the Giant. After I beat Sulyvhan, I went around and dug up Siegward, though his even didn’t happen when I wandered into Yhorm’s Room, and then went back into the Profaned Capital to enter the Fog Dor. Remember, I play this game blind. While a friend might have guided me at certain points to get Siegward, I didn’t really know what was comin’.

My first attempt at Yhorm feels great. I’m sliding between his legs, learning when he smashes the ground with his wind buffet and generally avoiding his attacks. All the while, I’m just slicing away at his Achilles, dealing as much damage as I can. When I finally die, as I expect, I look down and see that I’ve done… almost nothing. likely 2% damage. I resolve myself to be better. But, this time, as I run around the room trying not to get splorted, I see a shiny Item in the back of the room. I roll back there, pick it up, and note its significance. I don’t think I’d seen a single item in a Dark Souls boss room in the entire time I’ve been playing. I made note, and kept stabbing the ankles. This time, I lasted probably close to 15 minutes or more and, by all that was holy, probably did only about 2% of his damage. Again.

I take a look, now that I’ve died, at the sword. Says that it can kill giants. Seems reasonable. Use the weapon skill to unlock its powers to kill a giant boss also seems reasonable, and Honestly, It has 0 stat requirements, which is a dead giveaway that this is a quest item used to kill the boss. Its clear that this is how this is going to go down. I equip it, one handed, and go in with a shield. I use the weapon skill once I am in there to turn the sword a weird-glowing-gray, and go to town.

I am doing only slightly more damage than I was when I was stabbing with my knife. I lament to a friend, and then get to it again. After a few more tries and a few more failures, I give up on the sword. I spend a few more tries with both the sword and the dagger, before my friend, who I am chatting with all the while of text tells me “Its just too much to learn at once” about the sword. So I stick around outside the bonfire and mess around with it for a bit. then, after a bit of messing around, I deconstruct the puzzle  and am suddenly made aware of the route to victory. Holding the L2 button, it seems, is key. It only take a few attempts after discovering the methodology of slaying the giant with the Giant Slaying Sword before I am actually able to overcome the big bastard. Two Lords of Cinder Down. I’ve been waiting for this guy for a long, long time. Aldrich, Saint of the Deep, who’s cathedral I had pillaged long ago in the attempt to destroy him. Instead, I find him in one of the best surprises of the Game, Anor Londo. Man, I do not miss those Silver Knights.

The first time I jumped in and fought against him, I managed to bring him to about 20% health. It showed me that I knew what to do, if only I was more patient. Patience pays off, many times, in Dark Souls Games.

Instead, this boss gave me a bit of trouble because I was patient. He has a number of very powerful long range attacks that are both hard to evade and deal massive amounts of damage. Massive arrow volleys, homing soul darts and Massive blasts of Dark energy all come hammering down on you throughout the fight, but only if you are patient.

Aldrich, turns out, can bleed. This is great for my build, because I can simply slice-shank his body until it explodes, but only if I get there with enough stamina to do it. In taking my time and being patient, I though I was saving my stamina for awesome bleed outs. Instead, I was inviting a positively devastating barrage of destruction to be rained upon my head and shoulders. After a number of attempts, I realized the simplest thing about the fight: I needed to close as fast as possible. The boss, intermittently, would  summon a vortex of darkness and slither under ground, only to emerge in one of the four corners of the room moments later. When he started to slink into the ground, I would make my way to the center of the room, wait for the sign that he was popping up and then sprint over to his new location, and start stabbing his worm-tail. It was long, large, and – if I didn’t auto-lock on him, was very easy to attack, and with only a few attacks, maybe 7 or 8, would bleed for 15% + of his damage. Repeat this a number of times and it was over. Avoiding his arrows, those miserable, hellish arrows, was the bane of that fight.

After this fight, the last of the first lords of Cinder, I watched him die and let down my guard. Unfortunately, that meant that all the homing soul arrows attacked me and killed me right before the cut scene. I was not very pleased at all. After a short ressurection, loosing all my souls trying to get my souls back, and then looking up on the internet where I was supposed to go because I had no clue, I made my way to the next boss,

The Dancer of the Boreal Valley To go suddenly from one fight to another was pretty shocking, but it only lasted so long. The Dancer is surprisingly slow, and I was able to stay behind her and attack her heels the whole time, slowly bleeding her out. She has a few tricks, mostly involving picking you up and stabbing you on her flaming sword in the most hellish way possible, and then thrusting the sword into the ground and letting you slide off, but overall she’s simple. I stood behind her and stabbed her, a ton. On the first try I got her down to about, once again, 20% or less, much like Aldrich.

Again, there was a big learning point with her, which was that her second phase, when she claims the sword of darkness from the earth and turns herself into a dervish, is only temporary. I learned this when her spin stopped because she was spinning into the wall of the Cathedral. After that, though she now has two swords, she came at me in nearly the exact same way as she did in her first phase, though with no empty hand to grab me with. It took me way longer than I would like to admit  to realize this, but once I figured it out, she went down pretty easy. It is also possible to bleed her out, and with 50+ bleed an attack, she would lose large chunks of her health fairly swiftly if and when I was careful. Once she was done, It was time to move on.

Finally, after digging my way through the consumed kings Gardens, a place that was pretty crazy to me with all sorts of toxic pools, I came across 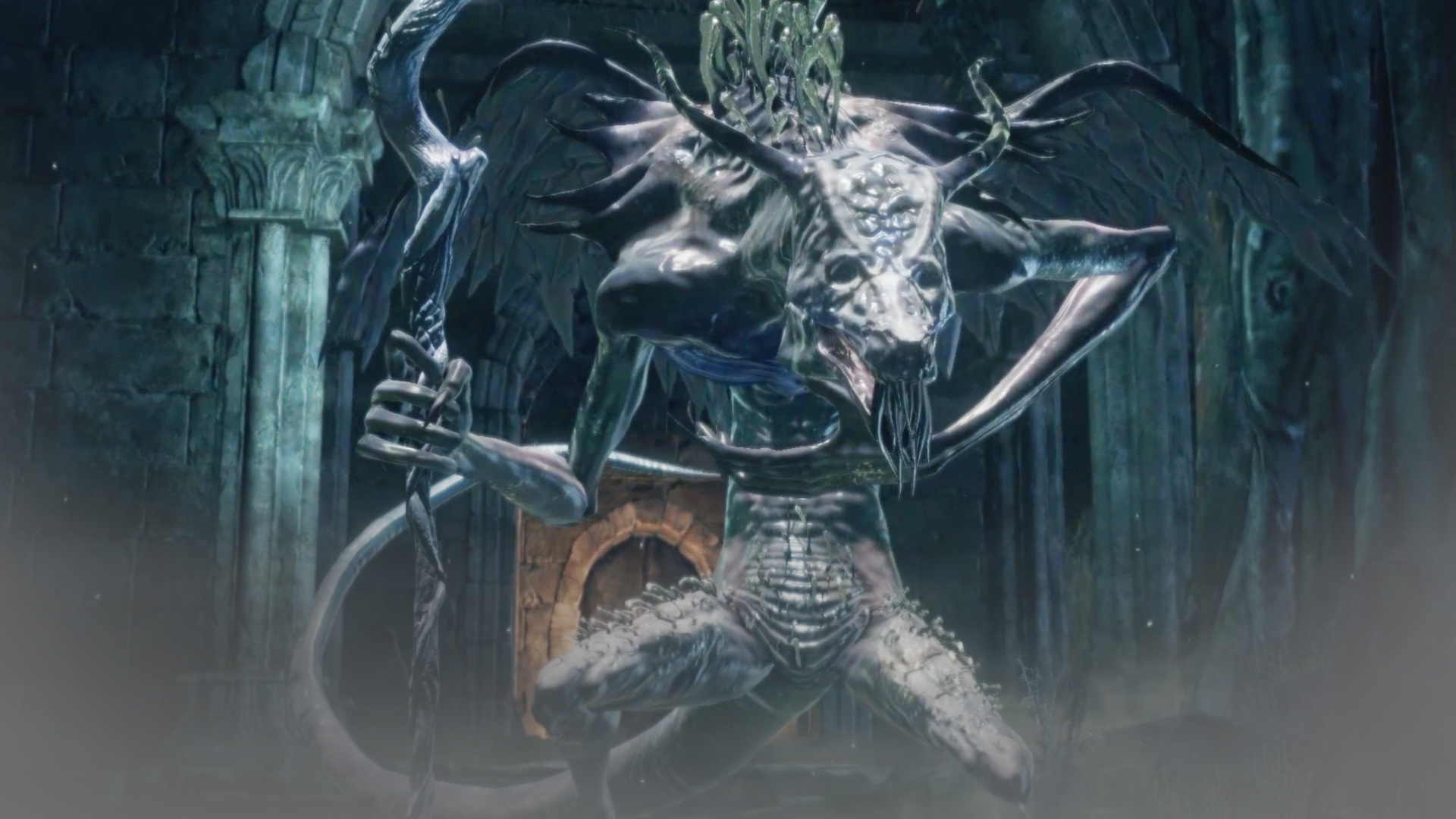 This fight is very, very strange. For the first little while, the Wizard-dragon clutches to an invisible – or imaginary- thing at his chest while he slings spells and attempts to crush you under his body weight. Eventually, after receiving enough damage, he turns into a bestial state and drops to all fours, crashing into you, breathing Crystals and attempting to chew on your face.

This boss, for me, was pretty simple. While Aldrich and the Dancer were also fairly simply, they had a much more complex set of moves and different animations that made their fights interesting and diverse. There was many things that could be done each time the boss turned on you, and each time was a varying degree of difficulty to counter. Oceiros was not so much that type. As long as I stayed in his crotch in both forms, I was reasonable successful at stabbing him with my Blood Knife and bleeding him out. You have to avoid a whirlpool of destruction that he likes to summon in phase 1, much like Aldrich’s darkness pool, but that is about the extent of his Phase 1 difficulty. His second phase, when he’s abandoned all reason and is simply trying to destroy you, you have to worry about the Crystaline breath and, in a moment I found out and was none to pleased with, his knees. If they hit you while attacking and he is trampling o’er top, its a massive chunk of damage.

Its a really simple fight, though. Slash his rear knees until he’s a dead dragon.

This bleed build is interesting because its so different from the builds I’ve had before. where in battle after battle I’ve survived because of my ability to absorb damage, this time I am only absorbing when I must, but more often than not I am rolling away and sidestepping instant death. Each blow I deal does significantly less damage than I am used to, but the cumulative affect is very powerful, as I am able to get many more attacks off before my stamina bar deplets. Its a trade off and especially with the bleed levels that I have now, one I am willing to accept.

Hopefully next time I am telling you about what I did to defeat the final boss and head into the ringed city.