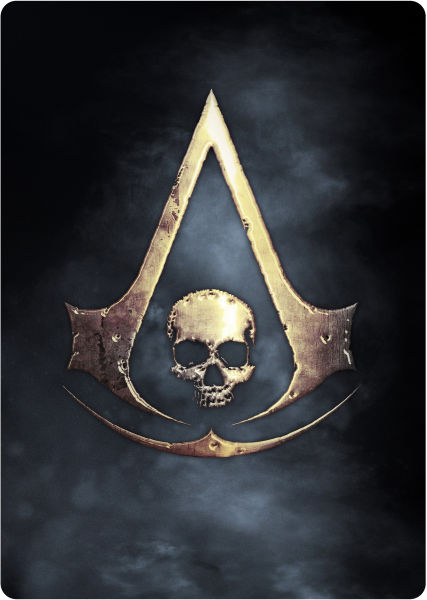 I want to start with a small preface:

I’ve been listening to a lot of Extra Credits, along with their other shows, focusing mostly on game design because it intrigues me so very much. However, like some sort of Pandoras box, it has opened my eyes to things I’d never really paid attention to and I don’t think I can turn them off. Thus, really, is the story of Assassins Creed: Black Flag.

Two is a Crowd, Actually

The game starts out with you as a pirate, which, given the name of the game, is a good omen. There is little exposition, I say to myself. I am quickly thrust into a naval battle where I am forced to fight against three other ships. I’ve been handed the role as helmsman, and have to make the decision on how to fight.

The first thing the game does, thankfully, is give you directions on how to aim (hold down the left trigger) and how to fire (pull the right trigger) while also giving you the concept of steering with the thumbsticks, as is standard. I know that I want to shoot down their stern if I want to do the most damage, so I start trying to track and hunt down the ships I am in combat with. I’m holding the trigger to aim (because that is what they told me to do), and simply trying to point my prow at the ship’s stern. This does not work.

It takes me a few tried before I realize something fairly dumb, but was never communicated: you have different guns. This is extremely poor tutorial design, and diggs at me, but I eventually work it out. If you’re looking to port when you pull the left trigger to aim, You’ll aim with the port side cannons. The same holds true for starboard. If you look forward over the prow, your shooting only your Chain-shot cannon. It.. does not do much damage.

Once I’ve gotten then hang of shooting g’damned broadsides at the enemy, I am easily able to take them down. Thankfully, the game then shipwrecks you with an assassin on an island in the Caribbean, where you’ve been a-Pirating. There is a quick encounter with the assassin, who then runs off, and you go after him. Once again, its a tutorial, this time on free running, jumping, climbing and dropping, among other things. Its good, but not really good enough. It takes me a long time (well past the tutorial and into Havana, to realize that I don’t have to press a button to continue climbing upwards or sideways, you simply have to tap the stick in the direction you want to move. Sometimes, hitting a button and jumping can be extremely dangerous, involving a multistory plummet to your death. Not a fan.

I flailingly free run across trees and up the sides of buildings, clumsily falling off roofs and humping rocks I feel I should be able to climb. Free running is a little bit of an art, and it takes some time. The Assassin, at each step, waits for me to come to him and then either mocks me, threatens me, or finally stands his ground as I – am swiftly stabbed to death.

Tutorial part the third is similarly aggravating. I’m put in a fight with this assassin, and the helpful task oriented quest tracker simply tells me to “Kill the Assassin.” I die.

What is frustrating here is not that the combat system is hard – It is clearly not, but that the combat is ill explained. The first thing it tells me is to press B to Counter an enemies attack, and then it tells you to press X to attack.

The key problem here, though, is that you need to draw your weapons. This is a thing that I did not know. I stand there, dumbfounded, in front of Duncan Walpole, as he stabs my flabbergasted character in the chest. I die, and have to start over. This time I learn I have weapons while durdling around, and succeed in slaying the assassin – Something I would have assumed wasn’t possible, due to the reputation of the assassins, and the Gunner turned helmsman turned survivor that Edward (the main character) is. I must be much better at fighting than they play him off to be.

This next part really gets me upset.

Now, the game tells me to reach Havana. Seems Innocuous enough. It even shows me a boat down in the little cove below me. But the Cove is a giant red area on the map, flashing with danger. When I get to close, the screen tells me “Warning! Restricted area!”

I know enough, at this point, as a person who’s seen the game played a few times and who’s experienced it for about an hour, that I can desynchronize. It happened when I died, and I’ve seen it happen watching other people play the game over the last set of years for short bursts. I immediately put two and two together.

A restricted area means I’ll desynch when I go in there.

I head out to find a nice and sneaky way around, maybe there is a lifeboat nearby, or a cave, or something. I scour the island for 45 minutes. I turn the system off in disgust and go to bed. Later, I come back. Maybe there is redeeming value, here. I spend another half an hour wandering around, jumping and climbing and humping stone walls. The system turns off again. Its days before I turn it on again. I restart the level, thinking I had missed a clue somewhere. There is no clue. Finally, after nearly four hours by my approximation, I decide to hell with the game, I’m going to see how far I get in this restricted zone before I desynch.

and I don’t. The red Restricted area is simply an area where the guards are on high alert and you’re not allowed to be spotted. That is all. I kill all the guards. I meet my ride to Havana, and I get off the gods forsaken Island.

What really makes this a bad tutorial in my eyes, is that it clearly caters to older players, those who have slogged through a 5 or more games to get to this point, and who already know the hotkeys, the systems and the concepts. It assumes that the players are already familiar with the controls, and is simply making them accustomed to the old setup on a new system or a new game. The few things that have changed are pointed out, while the rest lies in wait.

I’m not one that really needs tutorials, most of the time. Games are either good, and I can figure them out, or they are bad, and are so obtuse that I cannot. The problem with this specific setup is that they give you just enough information to make the wrong decision if you’ve not grown up within the system they are in. It very much feels like the designers never took a step back and thought about the newcomer to the franchise, which I feel is exceptionally egregious in a game that is, as far as I can tell, more of a Pirate Simulator with a bit of assassinating than an Assassins Creed game with Pirates. This is the perfect jumping in points for people like me who weren’t actively attracted to the games original concept, but have come around and are looking for a way to enter into the mythology.

On a final note about Stealth games – This is something that I’ve picked up from the Extra Credits guys: The Iteration time can be unbearably long, but the punishment for failure is, in my eyes, perfect. You’e put into a situation, at least I am currently, where you have to fight your way out of overwhelming odds. The fighting system is brutal, pretty, and perfect for a stealth game. It does not require a ton of finesse, it does not require a specific set of skills in a combat type game. Instead, its a simply Wait- counterattack – execute chain. I often will stand still in a fight with 4 or more targets and wait for one of them to attack in order to attack them back and instantly kill them without exposing myself. While the Combat system isn’t complex or difficult, it does seem to grand you a strong sense of accomplishment for correctly executing, which seems to be proper for a stealth game. Simply hacking your way out of combat, without patience and a deft hand, will likely end up in your ultimate and untimely demise!

I said at the start that I don’t really do stealth games. Black flag will be my first, but it may not be the last. I have come to realize, likely way later than most, that the stealth game is actually a huge puzzle game. Instead of a layout you have to beat or a boss you have to learn, it is instead something to dissect for the best possible solution given the current circumstances. It rewards old salts like myself, who like to explore every portion before moving on. I can look around a house, inside and outside, and make an assessment on how I think I can best assassinate my target. It is an interesting challenge, as I look into each area with a different perspective than I am used to. I am seeking out hiding spots, patrol routes, pulling channels. It feels a lot like a WoW raid playing as a solo rogue. Its very interesting, and I could see myself picking up another one or two. Any suggestions? Till next time!