Welcome back, Last week we put the touches on the landmass and vegetation portions of the continent I’d been creating, putting together the lessons from the first section. Now, it is time to start populating it with creatures.

This second section, The Natural World, will focus up to and on all the creatures in the setting, why and how to populate them, and how to conceive of their interactions beyond the standard predator and prey situation. Since we are here, however, lets take a look into exactly how predators and prey shape up and how they work differently in a Fantasy world.

Up until now, there has been little focus on the fantastic portions of a setting. This will become less and less the norm as we tackle the issues ahead. Animals, societal interaction, laws and culture are all going to take on a general fantastic feel where the land itself tends to define the feel due to outside instance. Creatures, as insignificant as insect and as destructive as dragons, are all going to be addressed for the foreseeable future, so buckle in!

there are multiple aspects vital to understanding and preparing believable encounters. The set the stage correctly,  there must always be the typical size and form considerations, but one of the most overlooked aspects is that a creature actually lives in the area it is encounter, and therefore needs to have its diet taken into account. This will mean that a large herbivore will need plenty of plants to consume as well as an area broad enough to provide them, but it is also means that predators, those monsters who are often aggressive enough to challenge heroes, will need prey to survive off of, and failing that, a reason otherwise. Often this is overlooked because monsters are encountered once maybe twice and then discarded without a care.

These encounters should be used to build the solid foundation of a convincing ecosystem, one that makes sense once the full view is taken in.

Most modern people encounter creatures in their day to day as domesticated animal fit to be around humans. When not in direct observation animals that are of fascination to people are often the large, the majestic, and the predator. These animals captivate our mind, enticing us to dwell on their inherent coolness. With few exceptions though, these creatures are the uncommon at best. There are many more  base creatures of the earth that engage little of our attention. These smaller or less populous creatures can make all the difference when conveying setting. Black, Red, and Grey squirrels are all common creatures in there respective habitats, but contrasting that with their commonality in a your fantasy setting  can be a small detail that players pick up on, guiding them into the setting and immersing them that little bit more.

While many of the encounters focus on large predators,  take note that most of these creatures will require massive quantities of food to sustain themselves. Their favored food will in turn, require an even larger amount of food to sustain themselves, be it small prey or vegetation. This means that prey must be plentiful for large, wild predators to exist in a given area, which in turn means that the base level producers (Plants, Plankton, ect) must be extremely plentiful indeed. Its a simple, but often overlooked premise. You cannot have a den of Owlbears in a sparsely populated woodlands and have other top predators competing for the same sparse resources. This often builds into a simple clash where one creature defeats, kills and consumes the other. While a moose corpse may illicit wonder and surprise, it is unlikely that their will be much worry as moose get eaten all the time. The picked over and chewed over corpse of a Bullete, however, is noteworthy! what is so nasty and hungry as to kill and eat a land shark!

Making sure that the prey matches the predator and that the pray is extensive enough to support the monsters you are going to be putting into your adventure or fantasy setting is important. It gives you a baseline from which to work, setting the stage for large predators, beasts of burden, livestock and rodents

Related to the former topic in a rather direct way, predators form the backbone of most ecological systems. Levels one and two are base producers (on land, at least) and their herbivorous consumers, every level beyond that are predators of some sort. Scavengers, omnivores, and obligate predators all form interweaving webs of energy transfer for survival.

This is something that is not generally taken into account when it comes to populating monsters in the course of a dungeon or geographical area. Populating anywhere with a bunch of predators can be interesting and interactive, but is ultimately going to give your players pause. What do all these top level predators feed on to keep them alive? Was the dungeon in stasis? Is the area some sort of magical place that allows creatures like this to exist outside of the normal realm?

Dangerous beasts are a hard thing to balance, but there must be care taken when adding them to an environment. Without a way to increase the population of prey species or for the predator to leave, there will be a limited time for the predators to survive. Many predators eat faster than animals can breed causing rapid decline in populations given a closed off environment. Take special care when using mystical creatures as they are likely to be extremely effective and devastating predators. a pack of wolves may be difficult for common deer to handle, but a pack of hell hounds or winter wolves would quickly decimate prey species.

Additionally, make sure not to place to many apex predators or even fairly high predators in these systems. They will often range wide areas so as not to depopulate a region, being rare on their own and even rarer in the company of others of their species or even other creatures.

What both of these topic distill into is the Energy pyramid 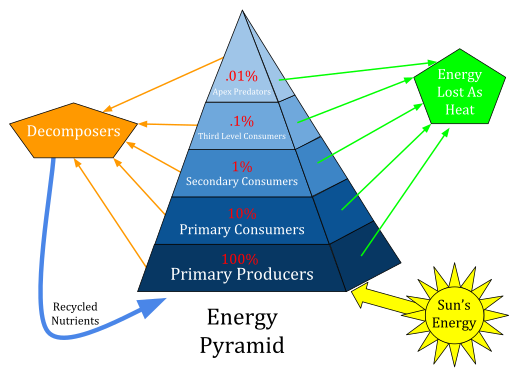 What this boils down too is that the populations of areas are fairly static, though there are exceptions. There must be 10 times the number of Apex Predators in prey animals to feed them. These predatory animals are getting .01% of the energy of the sun converted into fuel for their bodies to function. Those Third Level consumers and other Third level prey need 10 times their numbers to fuel them. This is an oversimplification generalization, but works for our purposes, reinforcing what was said above. Diet is vital to a believable ecology. You don’t really need to dwell on it all to much, come up with big numbers or totals. Instead, be aware. Dragons cannot be everywhere, but bison, deer, frogs, and snakes can. Start thinking about how those giant animals interact with the rest of the world. If you have giant scorpions, what do they eat to keep themselves functioning. Is it other, less dangerous, large creatures or is it larger, more docile creatures. Are the scorpions hunted themselves, in turn, and are they the only food source for that bigger, nastier creature? Are there other giant insects praying on a vast array of other creatures of equal size or multitude.

This form of thinking really helps me flesh out an areas diversity of creatures and the culture of the humanoids around it. Large herbivores often have only a few real predators, so starting in the middle really helps. Like the scorpion example above, you’re looking in the middle of the pyramid unless you decide that there isn’t anything that preys on those giant bastards, and I can’t blame them. Then, the Apex predator becomes an insect who owns the desert and eats camels and people for its main staples. These create interesting and enjoyable dynamics within the world that can define deities, religion, policies and even the borders between cultures. Having a pretty rough sketch of any given area you intend to explore is always a great help.