A few weeks ago, as I was trying to place an order for my KR Multicase, I put up a review/Guide as to how to use their product. Mostly, It went over how I expected to use their foam, but I had no foam on hand to showcase what can be done with it.

Days afterward, I received the shipment, and spent quite a bit of additional time putting it all together. Now, in stunning full color for the very first time, I give to you the glory that is Cryx – KR Kaiser 3. 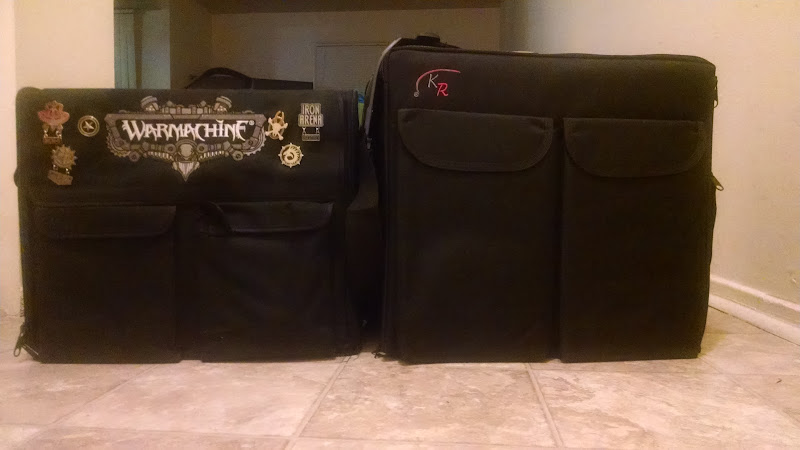 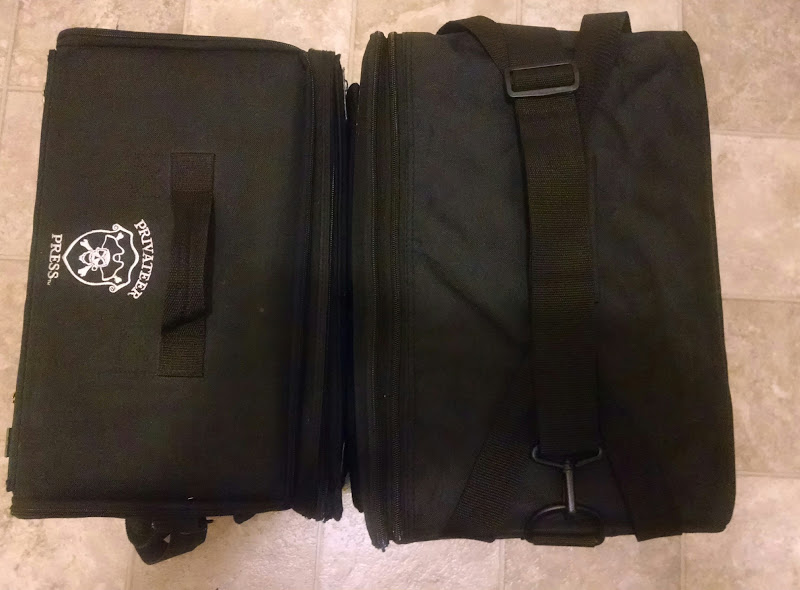 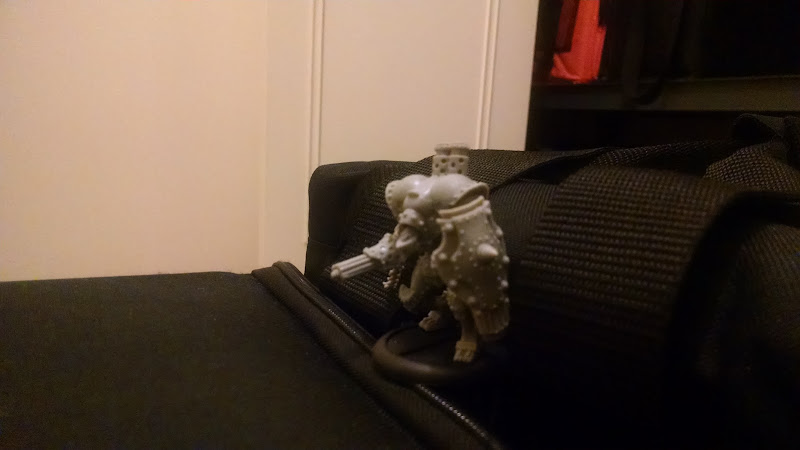 You’ll notice the the KR case is both Taller and wider. While this can be a problem for someone trying to take it as a carry on, I don’t think it will be that big of an issue. most of the extra space is in the plethora of pockets, and w with those empty, I don’t think its going to be enough of difference to preclude it from carry on status.

That simple bit of extra space, though, provides for a wealth of extra room for models, both large and small. Lets take a look.

First, I’m going to start with the M4H Trays. Holding 25 models in a 1/4 height tray is the model of efficacy when it comes to miniature storage, and I can tell you that I’m very pleased. Because the foam is soft, I feel comfortable putting models with long swords and poky bits overlapping the edge – even the bottom of the tray that will rest on the weapon is soft, allowing models to “dig” into the foam without damaging either it or the model. I managed to fit an enormous amount of models into the M4H, and it is by far my favorite tray 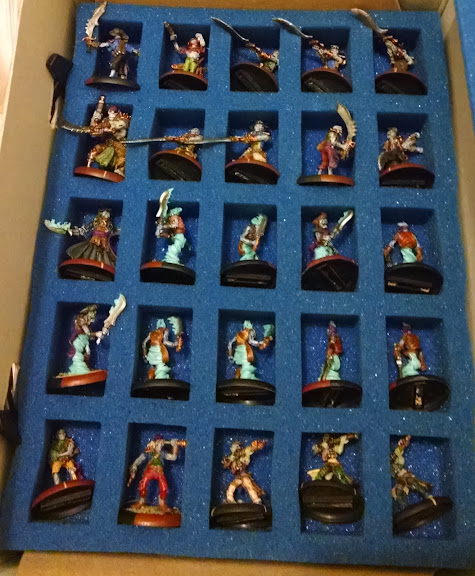 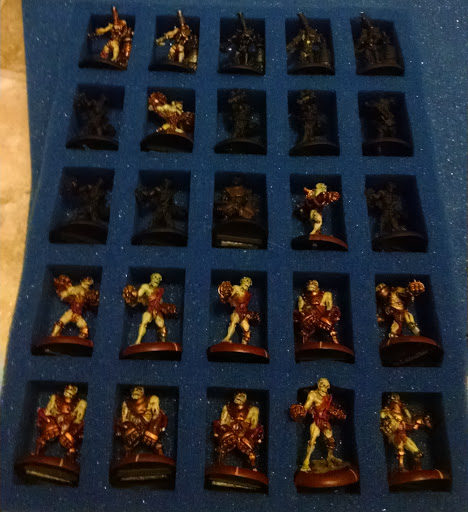 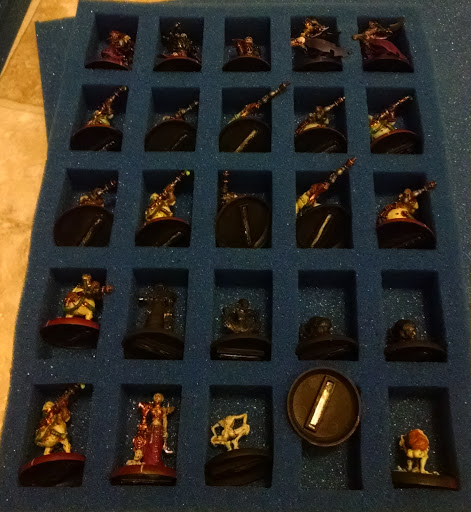 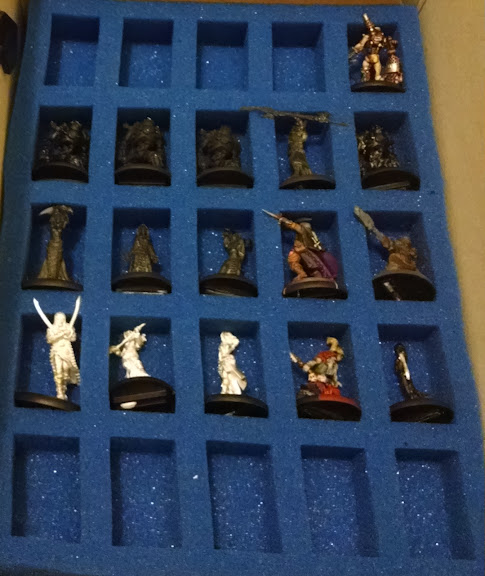 This next tray, The N4H, is critical to the collection, but one I didn’t find a ton of use for. Tall models in Warmachine are kind of sparse, to be honest, and the Long ones are better served with other trays.  Once again, I was fine with models sticking out just a bit and having them touch foam, as I knew that the foam would give, not the models. 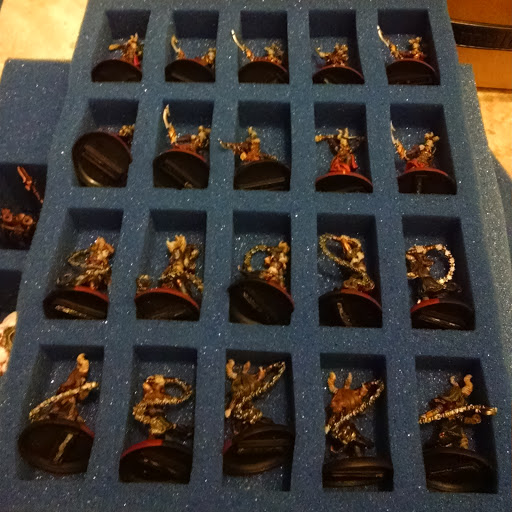 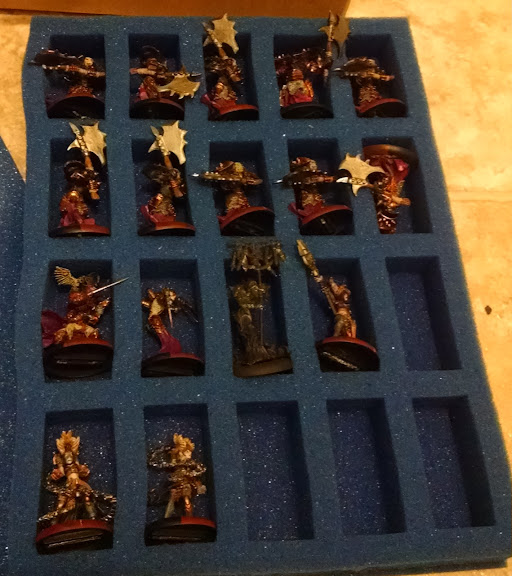 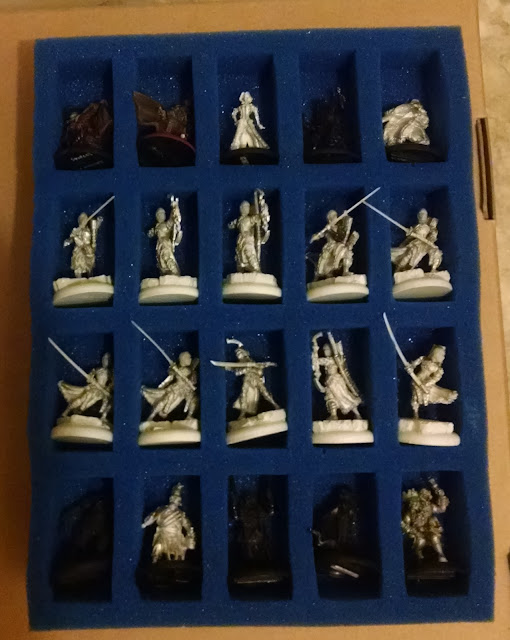 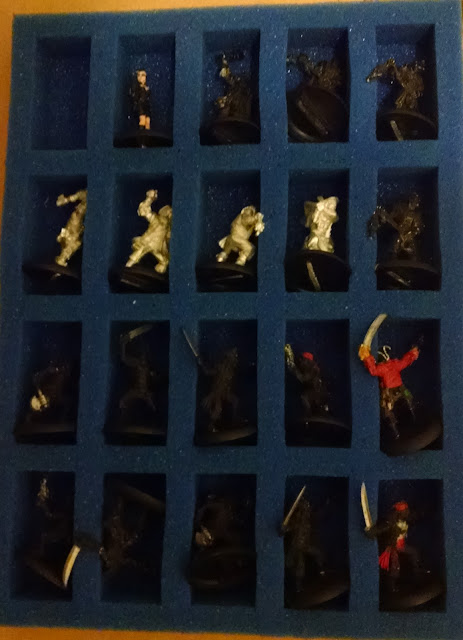 The F size trays, whether 3 or 4 size, are one of the massive surprises of having the actual foam in my hands.  As stupid as it was to say, I was legitimately stunned by the amount of models that fit into it once I was able to get it to my house and start using it. because of the cut and the orientation of the slots, I was able to fit models much larger than I initially expected into the trays. 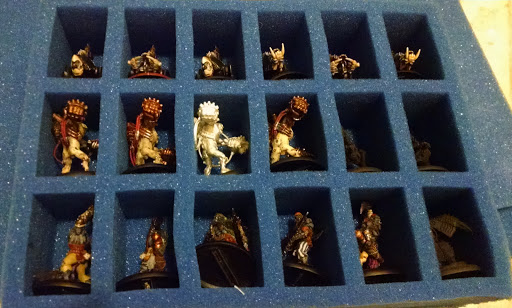 a F4H, not always the best, but the ability to fit a ton of medium/Large models is awesome. 4 Brute Thralls, 8 arc nodes, 5 Black Ogrun and three “other” light jacks. 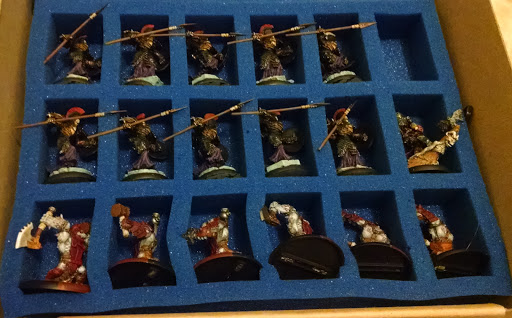 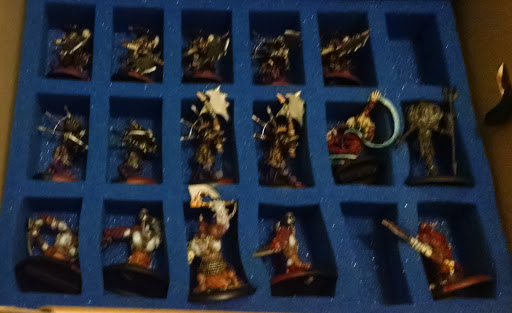 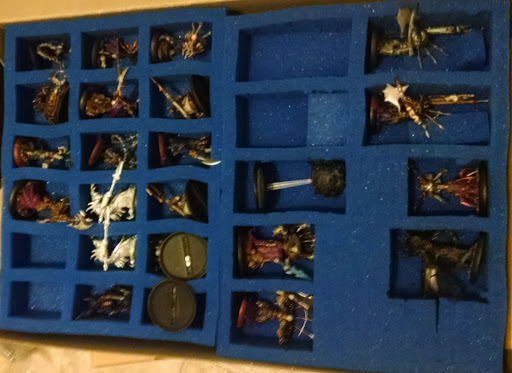 on the left, Random Solos and Models, on the right, Pick and Pluck

The above makes a nice segue into the Pick and Pluck, because its all that’s left in my case. I’ll make my way through each, and see what I can do to explain them. They are… not the easiest to use.

First, the above. That one is a D3H. 1/3 of a tray with 40mm plucks. What is strange about these all of their pluck is that they have the 10mm barriers between each row of pick and pluck foam, and that can be very problematic when trying to figure out how to get each miniature into the foam. I find this system to be very strange: They have pre-cut foams that fit almost every size, in terms of height, its in the width department that they don’t always accommodate, and this pluck foam does very little to help with that. Odd shapes and strangely formed models are a bear to fit into the KR without some serious pluck accommodations that I feel could be ameliorated by removing the 10mm barrier, or at least making it so that it has a “pluck” portion instead of needing to be cut. 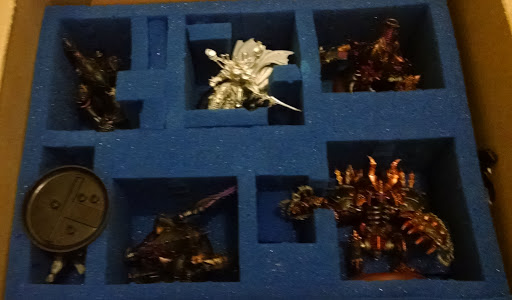 Models in a V5H. I don’t particularly like this, but the V is the best of the pick and pluck, being the smallest boxes. 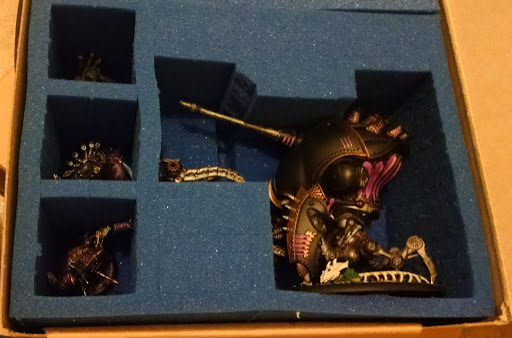 Not something I’d do again. I think I’d much rather a V pluck so that I can get different models in there. There is a TON of space, though, with room for a Kraken, Asphyxious 2 and 3, and Venethrax. Versatile, but the V would be that much better. those ancillary spots are the second to smallest I can make them. 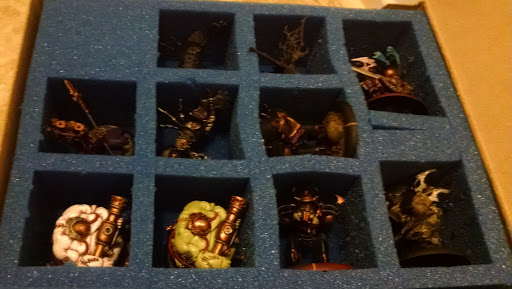 Once again, not something I think I couldn’t do better with a different pick and pluck, this time the D2H, though I could be wrong. I do fit a ton of large models in here, with room to spare, including 4 heavies. 11 models to a half tray, 22 to a full tray is pretty solid. 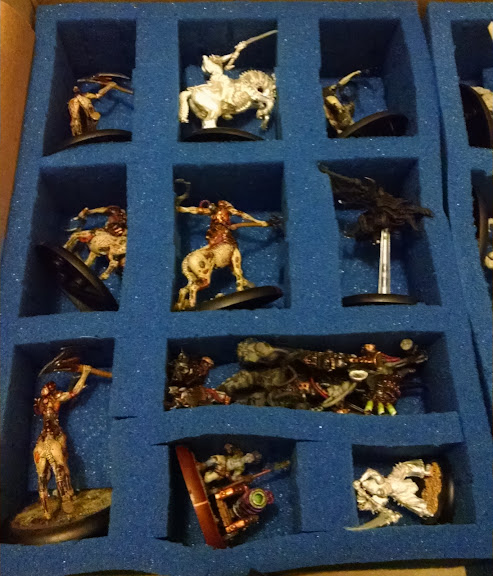 The D series Half foam is very good. Being able to fit a full unit of Soulhunters, Wrathe, a dismount, all the arms for the Magnetized Slayers alongside an Artillery Platform and a Light Jack is pure gold. a full tray fits 18 cavalry! 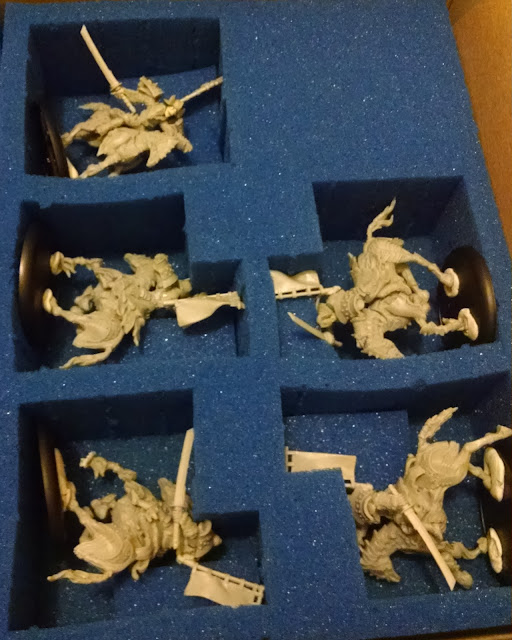 The last tray is the one I am least happy with, but that is likely my fault. With large, absurd and strangely shaped models, I was only able to fit ~6 models into the tray, and it was really disappointing to eat a whole half tray for just these 5 models. While I can understand that I’ve converted them, its still a shame.

I’ve gone through all of my models in the Cryx army, save a few (my second unit of Soulhunters, for instance.) What I find really impressive is that all of this, with the exception of the Kraken Half tray, fits into the K3 case, with room to spare for new models to come out. You’ll notice that that means that I have plenty of room for Mercs (pirates, solos and Nyss Hunters) in addition, and I could easily have a half-box of Mercs that I sub in when needed. with plenty of room. To that end, I think I am going to get a half box simply for the Revenants. The trick now is finding which easy to sub out modules I can make that are generally not overlapping.

I hope this helps you make the best of your KR cases and trays, let me know what you do with yours!