Its been a long, long time since I put up something That I’ve painted, and I figured I’d just toss some models up here, talk a little bit about them, and get on my way!

First, and most obviously foremost, is my Donate or Paint Challenge Model. I was challenged by my buddy Faultie to paint up, in 72 hours, a model or donate money to the cause of one gentleman, Marc Harrison. 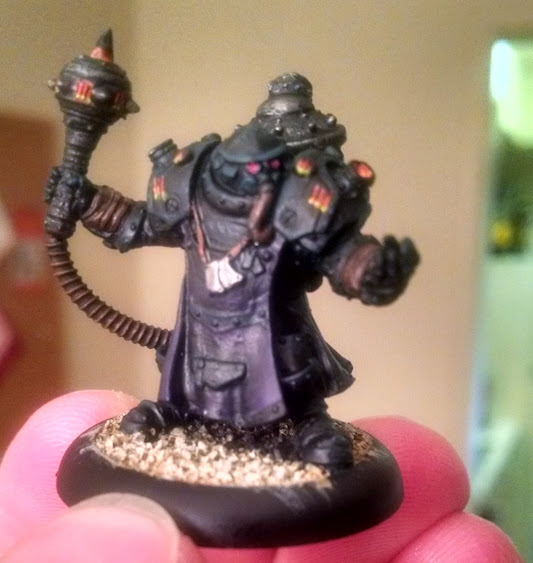 This models concept was surprisingly simple: This model should be almost completely black. not just black armor, but black everything. In person, even that purple is almost indistinguishable from black, as are the hose and armor. most of what you see are the base, and flames. Oh, and of course the eyes. I has a blast painting this, and look forward to painting another pair, as they are up next.

My second favorite is a Raluk Moorclaw. I loved his sculpt so much after seeing this guy in my hands that I went out and got one, even though I know his rules are a little wonky and that he is unlikely to see use in even the strangest of lists for both Cryx and Minions. When I paint a model that not for me, I love to toss a bit of orange in there, no matter what their scheme is. I love painting the color, and have found a huge variety of hues and colors that I can get without much effort. Though I won’t keep him for every long, this model will always be one of my favorite to have painted.

Speaking of paint jobs for other people, I also was able to paint a very enjoyable Morvahnna 2. This model just oozes awesome. I followed the paint scheme given, but managed to sneak my orange in their anyway. 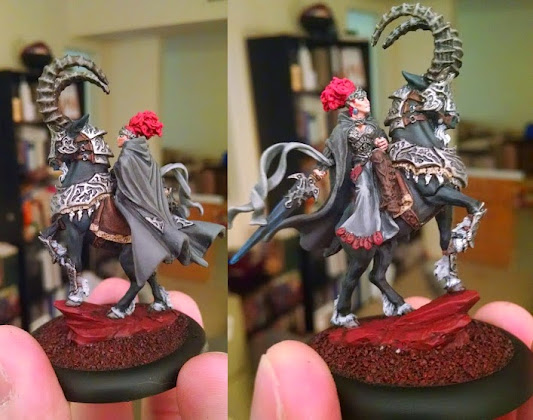 Now, onto my models, Which aren’t many but I am fairly proud of them none the less.

The Fat Man himself, Dominar Rasheth, was the first model I’d painted for myself in many months, and the first Skorne model in possibly years, I don’t remember. Getting back into the groove with painting him was a little bit of a trick, but once I was there he was every bit of fun to paint that I had hoped. 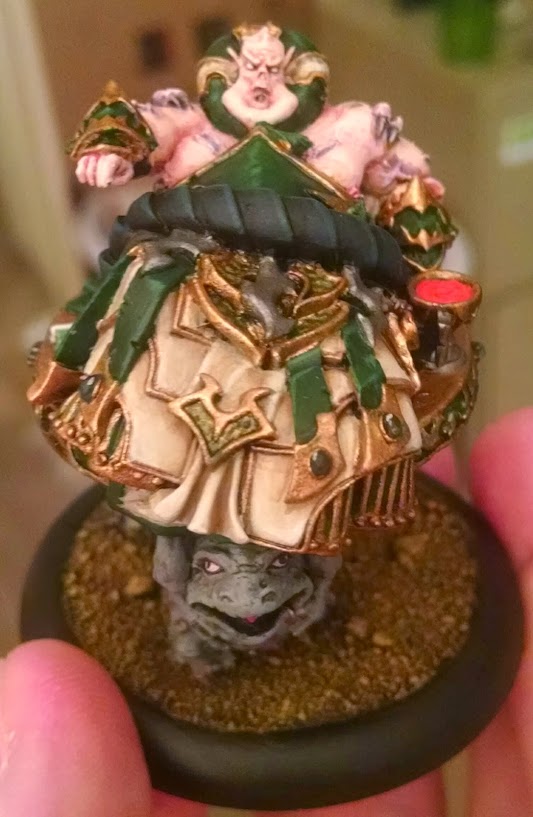 The skin is always the hardest part to get right on these models, because I think I’ve forgotten more ways to paint it than I remember. The green and bone is a simple enough color, but the gold is a giant pain. With the PP solid gold coating terribly, and the need for extremely precise targeting with the paint, I’ve had to give up my favorite gold color and move for a more bronze-gold than the pale gold I initially wanted.

Painted alongside Rasheth, for obvious reasons, was my little adorable agonizer. Though he only took bare minutes to paint, he was a guy I use so often that I wanted to make sure he was taken care of. I’d started him probably three years ago, before I’d discovered a little bit more of what I can do with paints and painting. Now, I’m happy with him. 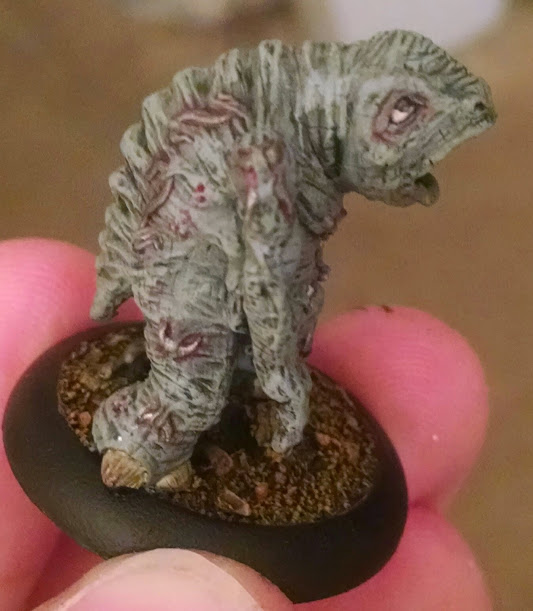 Then, I put my brush to a caster that was primed, because it was winter, and nothing gets primed in the winter. Makeda 2 was a model I wan’t particularly excited for, and once I started my excitement level dipped even lower. Sometimes, when painting a model your unexcited for that is also not coming out right is to change something up. Simply chaning her shirt from bone to black made her work that much better. In the end, I am pleased with how she came out, and am excited to paint up her second epic incarnation and see how she comes out as well. 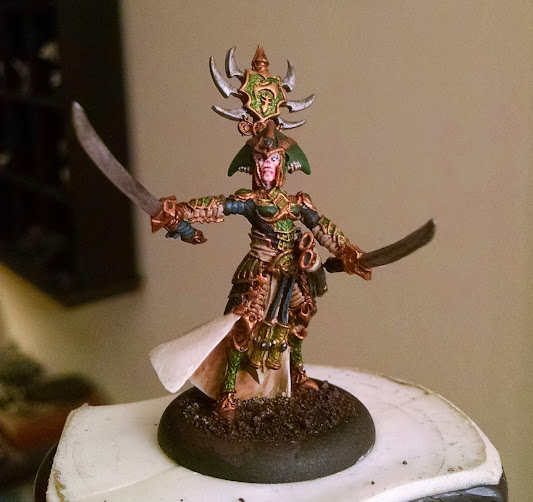 After I finished her up, I took a venture into my bag and came out with some models that I had started way back when, and wanted to finish. This was before, like the Agonizer, I had learned a few new techniques like blending properly, mixing colors correctly, and a bit of patience. First to come out of the bag was Aptimus Marketh, a model I love in almost every situation. he took a bit of work to bring up to mediocre standards, but I wasn’t about to paint him up again. 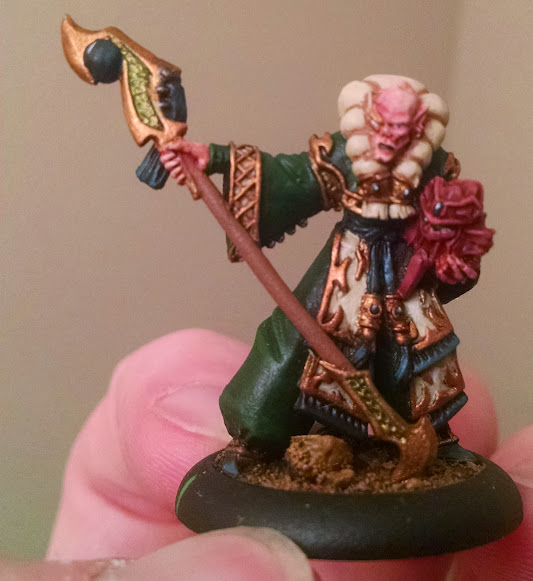 Finally, and I just finished these two up on Saturday, were my Tyrant Commander and Standard Bearer. Both were frustrating to paint, again coming from a time that made me have to just straight up repaint a number of the models features, but also because they are insanely Skorneish: All that filigree is insanely complicated. I’m not a fan at all. At least the Tyrant Commander has useful rules and a fantastic model. The Standard bearer, while nice in a pinch just isn’t a model I am putting front and center every game. He almost killed my will to paint… 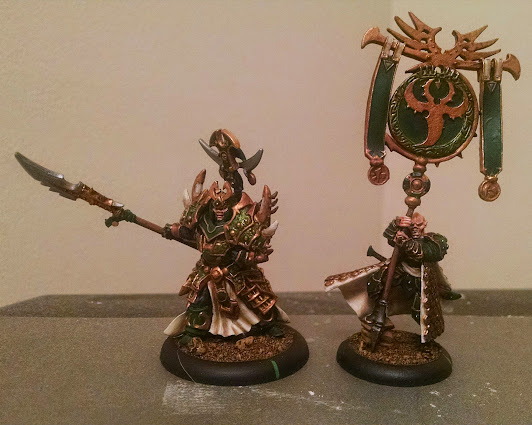 With all of that going on, I had time to do a little stupid Conversion. I love Darragh Wrath, and I love scythes, but the scythe on Darragh just wasn’t impressive enough for me. So, I found a pair of those old GW Zombie weapons and carefully made that weapon look scary as hell. I love it. 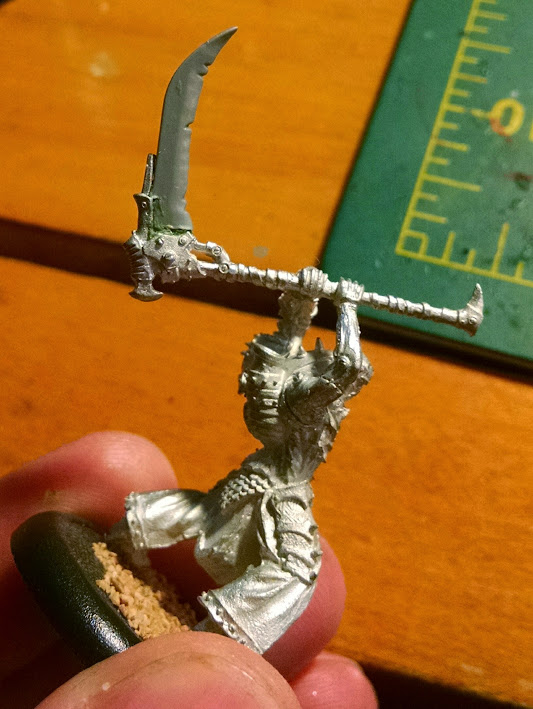 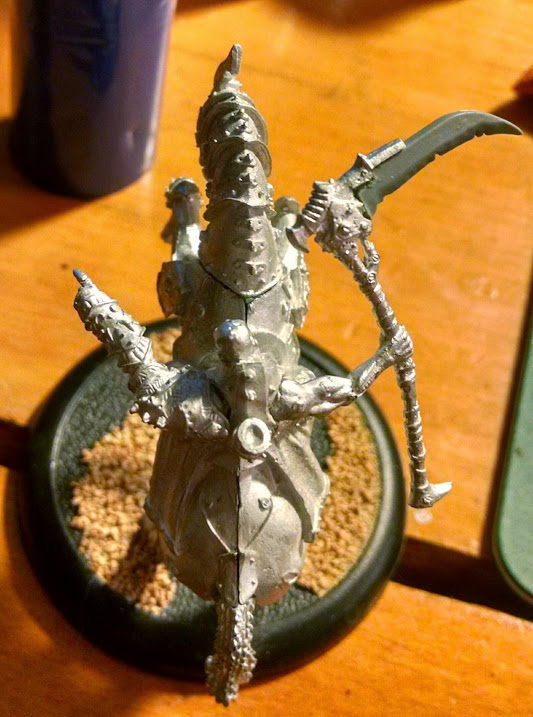 Do you know how hard it is not to go back to Cryx right now?

Even with all of that done, I’ve got a loaded painting table. I’ve pledged to have a fully painted tier 2 theme list for Lock and Load, to milk the most out of the Iron Arena Games I play, hoping for a Hydra or other awesome art print. In order to do that, I’ve got a Bronzeback, a Gladiator, a unit of Bonegrinders I don’t even own yet, and a Pain Giver Task Master. Additionally, I’ve decided to paint a caster a month, and up next is Mordikaar. Last, but certinaly not least, I’ve still got two exchange models I am going to paint up. One for Aggyfaces Legion of Ice and Fire, and one for my buddy Mike, who painted me a ginger Caliban!