Since a friend picked me up Zaal 2 at Gencon, I’ve been playing him exclusively, with strong results. Part of that is the inevitable surprise that new casters bring to the table, but a substantial portion of his success is due to the fact that he’s a solid ‘Caster. I know better than to believe that he will become one of the staple top 3 caster in the faction, but I do think he will get some solid play. His army list is constructed differently enough to engender a different play experience, but it is still the experience that is to be expected from the Skorne Faction. Skorne players have the same issue that Khadoran players have with their Warcasters, and I really don’t think that the issue is ever going to vanish. Both factions, at their core, leverage the melee potential in their army to finish the game. Zaal 2 does this with troopers, using the inevitable losses that an army sustains to guide and enable that which remainse remaining models to be more effective individually. Most Skorne casters rely heavily on their beasts. Zaal, in both incarnations, does not.

I’ve not written a battle report on him in a while, but I’ve gotten in three games with him since the last battle report.

The first one was against a buddy of mine I don’t get to see nearly often enough, because he lives farther away than we really tolerate on the east coast. Two or Three hours is a big deal! He tossed down his Gators and NOVA, and I didn’t quite get what world of hurt I was going to be in when he said he was playing Caliban. 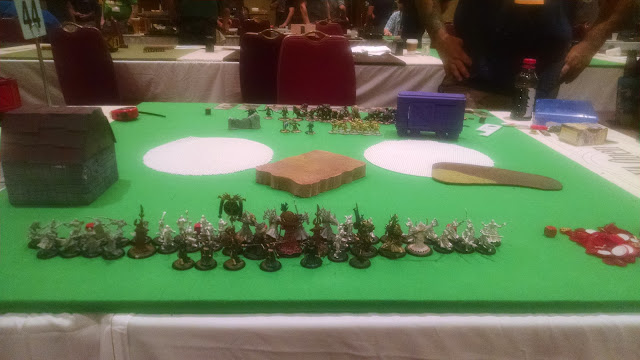 Caliban has Carnivore. Carnivore, contrary to what some people would tell you, is very good at RFPing an entire army. Additionally, I had a ton of single wound infantry, which is one of the things that Caliban really feasts on, powering his feat to insane levels. The game was a slugfest, with Gators getting cycled Carnivores to consume 8-10 souls a turn and really denying me a push. I was looking for an assassination angle, but one never really emerged. With Zaal being slow, and me trying out the cetratii for the first time, I was doomed from the start, though no fault of my opponents. I was impressed the the performance of the Cetratti, and here I learned that I should keep zaal in a nice bunker protected with AG’s at the corners, pushing forward the whole game. One of the reasons I lost was because I got jammed out on Scenario, with never a hope of getting back in. I could have, had I thought about that problem for more than a moment, positioned the army to take, hold and clear one of the zones, while the rest of the army plays defense, flooding the opposite zone. I could have had a chance, I think.

Instead, I was the one getting flooded out and ended up loosing on scenario because I deployed Zaal and Bunker to much to the center. It was way to easy for him to toss a gator unit in each zone, keep em covered with solos and Raiders, and gum me up for too long to actually get a win. It was an amazing game, though, and one I’ll need to try again, this time trying to minimize Carnivore, somehow, while also not getting firebombed to death. 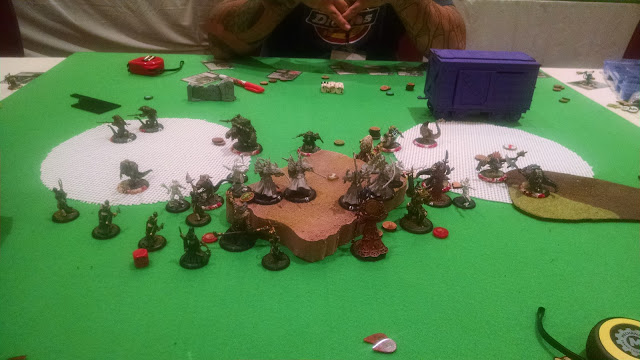 End of the game. Locked out of Zones.

The second game was the Zaaloff I mentioned last week, in which we were testing out two different list ideas against each other. I’d mentioned that I was going to put the Cetratii on the table again, but he wasn’t sold, just quite yet. He brought the Sentinel and a few other tweaks, but we were running 39 points similar. Him and I talk quite a bit about Skorne Theory, and how to best apply stupid things like Zaal 2 or Morghoul 2, so it was a concept-off. 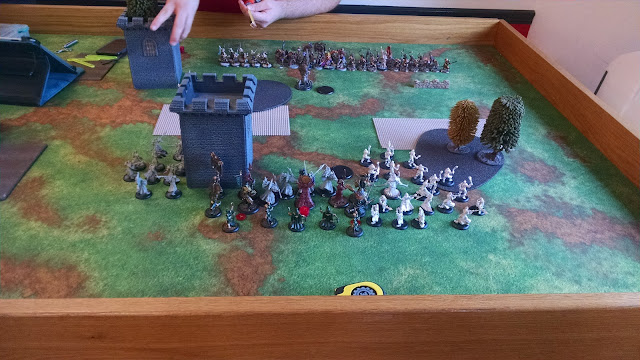 My First turn, when I was young and reckless

Our game played out in mirror, which was interesting. My Keltarii ran into the teeth of his Nihlitors, and vice versa. I had my Slingers opposite his, though, so we didn’t even try and engage each other. Zaal and the Beasts were in the center. I had my bunker, and he had his shooting Cadre. Thankfully, the bunker was able to withstand the barrage of poison, eye lasers and spikes to get to the center of the board. The Keltarii were able to take down many of his Nihlitors, though not enough to survive, and my Nihlitors suffered similar losses to his Keltarii and retaliated in kind. I was much more aware of scenario this time around, and I was able to threaten both styles of victory. The big play, though, was with the slingers. Able to position themselves to get a half-dozen pots into Zaal on turn 2, they spiked damage and left him at 4. He had transfers aboard, but failed to use them, and played the next pair of turns cautiously until he could pop his feat and use fury to heal. Additionally, I was able to test the Cetratii shield walling into something and using transference on em, and I loved it. piling damage onto the Sentinal was worth it, especially because it then had to take free strikes to shoot. Those free strikes were amazingly effective, and blew out two of the systems on the big guy, forcing his hand. The rest of the turn swung a bit in my direction, and when I started the turn with a huge stack of Fury on Zaal, I was able to clear lanes to Zaal and get to him with Cetratii, AG, and my Zaal. Even with transfers and full health, I was able to take him down, without transference. Zaal had to finish it, but that was more a fielders choice than a forced play. 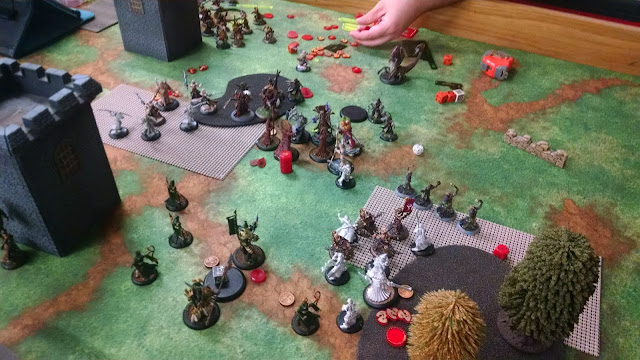 End of the Line, Zaal!

Finally, I got to play an awesome game that stoked my desire to get a hit squad list on the table. Morghoul 2 v. Zaal 2 was an amazing game, and I love mirror matches for this exact reason. If I’d have not fought against this list, my desire would still be mid-high. Now, its a burning desire to get a list for him on the table and try it out myself.

Sadly, I didn’t get any pictures of Tuesdays game, so you’re going to have to bear with me. His hit Squad list was

Playing Recon, the game was going to be a grind in the center for me, and I was going to try and get to a flag. Sadly, that never materialized. His army went for the flag I wanted and his caster went for the other. Between the two, and Zaal not being fast enough to re-position, I was really worried that  I’d drop scenario and loose the game fairly quickly. He did me a solid, though, and when deploying put the Croaks opposite the Keltarii, and the Bloodrunners opposite the Slingers. Redeploying on turn 1 enabled me to react a bit stronger and push deeper into the scenario than he wished. Thankfully, it didn’t matter, as neither of us were really in a position to capitalize on the center zone, but it could have had negative implications on the game, had it gone another way.

I’ve been a pretty standard victim of terrain lately, and its left me with a bad taste in my mouth about deployment. I made best do that I could, but I wasn’t able to press forward and run my Keltarii through the woods at the same time. The bunker was a little slower, and lead to me threatening just a touch shorter than I wanted too on turn three, unable to get two Cetratii on the Archidon meant I was unable to remove it from the board, denying Morghul 2 the extra hp from transfers in the process. After an attempt to get an assassination vector into Zaal 2 that failed, I was able to make it to him with a number of models and he only had three fury on him. The Raider, charging from the back needed boosted 12s on two attacks, and missed both. The Cetratii wander up and take their attacks, having been engaged by Morghoul 2 last round, and both land. One does minimal damage, the other drops a solid hit which gets transferred Morghul is at 8 hp. The Cyclpse Shaman also declares he is charging. Needing 12’s just isn’t working for the cyclpos as he misses with his spear on both the boosted initial and the bought second attack, also boosted. With two transferes on Morghoul, Zaal 2 decides its time to finish the game himself. He charges and tags with his charge attack roll, and at dice +3 deals a whopping 18 points of damage, which is transferred and leaves the  Gladiator with one damage, and Morghoul on one fury. My second, boosted attack hits. All I need is a 9 on three dice. Of course, dice come up one pip short, and I concede.

Which, thinking of it on the way home after D&D some 3 hours later, was the wrong course of action. Morghoul had no fury, no beasts, and was penned in on a number of sides. He may have gotten a charge off, and maybe could have gotten another model in, but that would be it. I’d not had any of my units activate at that point, if I remember correctly, and I could have tried to jam the zone with Slingers and Nihlitors to prevent anyone from getting to Zaal. dice -6 on 4 dice for Morghoul is 8, and then he’s got to deal 10 more damage. A charging gator might do it (Dice -3 on a taskmaster charge), but there is a lot of dice and I may have been able to prevent it.

What got me on tilt was that I lost Hakaar on his righteous vengeance move. I was counting on him to be able to get in there and get work done, but between the Gatorman freestrike and a massive roll on the Bloodrunner Master Tormentor strike, he bit the dust. Those one or two MAT 9 P+S 13 attacks could have made a huge difference. Pro tip: Calm down, keep winning!

I love Zaal 2, not because he is the best caster we have, but because he brings a different army build to the faction. Our strength is not our troops, they die with but the barest hint of a breath unless they are Cataphracts. Zaal 2 takes that and makes it a strength. The trap that you want to avoid with him is falling to deep into the soul train. Individually, most units aren’t strong, even with Transference. Instead, you want to slowly feed them your units, forcing engagements where you can reap the souls and push forward the next turn with strong results, all the while keeping your Cetratii, AG’s and Hakaar ready to punish anything that gets to close to the bunker.

I’d love to hear other peoples experinces with him, positive or negative!