Man, what a format! Spelldraft lived up to my lofty expectations, and I really enjoyed the whole 63 man tournament. I will say that I liked the format better than Who’s the Boss, specifically because I don’t have to be terrified of breaking someone else’s models.

Every opponent I had was a top-notch guy, and I’d play any of them again in a standard tournament, though I’d likely not do as well.

I ended up playing against,  in order:

The format is not balanced against the rest of Warmachine, but it is internally balanced with itself. It has a pre-selected set of 64 cards, organized into  8 pre-sorted card pools that are all crafted to create choice within the packs. In the pack I opened there were both Signs and Portents and Boneshaker. It was a tough choice to make, but I went with Bone Shaker.  I didn’t think that the capacity to remove up to 18 models in a turn was going to come around again, and I could spam it more than Signs and Portents. I also  didn’t know what was in the rest of the packs, and was hoping for another global buff. In the end, I don’t think I did so bad, though I didn’t end up with a single CTRL buff. 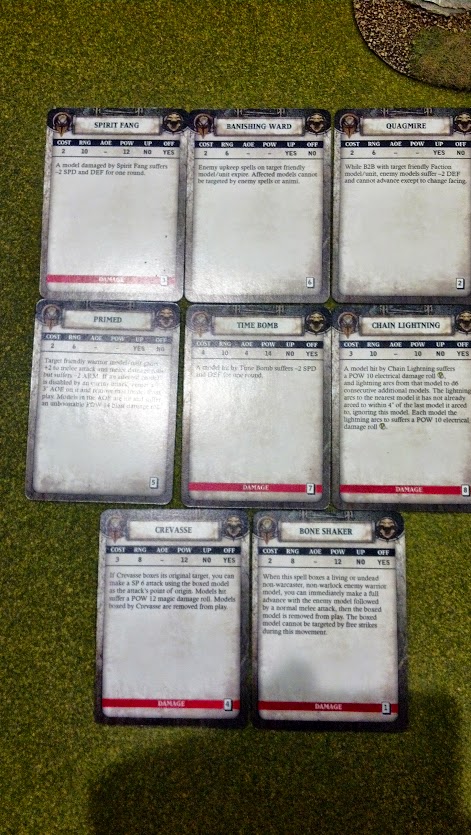 I had focused on making the most out of the random spells, but some players went with straight up high focus casters, some had no-frills casters who worked without spells, and other still focused on the feat with spells to enable it. While there was a huge variety, I was legitimately surprised at the lack of Harbingers and Kreoss 3’s, maybe that is just me. My biggest fear, though, was assuaged when they defaulted to Deathclock. I was a very happy camper seeing the chess clocks on the tables instead of timers. I was convinced that if we used timed turns, they would be the death of me.

Every games, as I mentioned, was a blast, so let me run down the highlights, for those of you who weren’t on my twitter.

Game 1: Austin brings a fairly standard Rhan list, with two units of Battle Mages, Sentinels, and a Phoenix. Thankfully, I got lucky Chain lighting rolls and erased his Battle Mages on the top of turn 2 before I could get engaged. Rhan ends up Spirit Fanged to death Turn 3.

Game 2: James Brings a brutal list of Kromack, twin stalkers, Ghetorix, and double shifting stones. Thankfully, last Masters I saw this terrible thing, and ended up nullifying one set of stones early on. I’d also dropped a ton of damage, but not enough to kill, into Kromack on turn 2, forcing him to play cautious. Though I hate to win this way, he ran out of time while making attacks on the Egregore with Ghetorix. He’d have won, no doubt, given infinite time.

Game 3: A very exuberant cryx player, who I forget the poor dudes name, brings an Epic Skarre list, with Satyxis, Bane Knights, Deathjack and Tartarus. He starts out debasing himself and how terrible he is, but I jovially call him out on his tactic, and we get along for the rest of the game. He forgets to feat at the only time he needed it, and I Spirit Fang Skarre off the board, again getting me out of the game on luck.

Not all those Banes make it.

Game 4 was against a terrifying Epic Haley list run by Adam with a Stormwall and Blazers. Thanks to Quagmire, the Satyxis were able to tie up the Blazers for the majority of the game, making them less relevant, but still potent. What really swung the game, though, was my 5 Primed Bane Thralls miraculously dropping the Stormwall, freeing me to go for scenario.

Game 5 was an epic debacle against Colin Hill, and his Epic Morvanna list. He ended up killing his own Gallows Grove, Feating for it, and dropping it next to the Coven. Two shots and a re-roll later, he’s killed two of the coven and a focus 3 caster just can’t get it done.If I’d have been better prepared for it, I had crevasse, and could have forced a longer game, though I did get to see the Staff Panel, so it wasn’t all bad.

Game 6 was against Craig, another Epic Skarre player who had full units of Thralls and Knights, along with Tartarus and Deathjack. I took Tartarus off the board with Bone Shakered Bane Knights, and then I was able to get the terrible Bone Shaker train to go off. I took almost the entire Bane Knight unit off at once. . At the end of the day, Spirit Fang shots into Skarre ended the match, after I survived her feat.

Ultimately, I think it was both spell selection and the list that made the Army hum. I was familiar with the Scenario, I had practiced using the caster, and though I had fiddled with the list a bit, I kept the basic parts strong and enabled my arcnodes to get into place to deliver the tons of POW 12’s to the casters face.

The three arc nodes, though I’d been cautioned against it,  meant I could easily sacrifice one to take out all his troops, one to drop damage into the caster, and have a third ready to finish the game.  Biles kept troops and casters out of zones, with MAT 8/pow 13 Bane Thralls keeping heavies in check.

It was an amazing, insane tournament that lasted for almost 12 hours, and I look forward to the PDF and rules coming out post-gencon. While the Static set of 64 spells could possibly get old, I spoke with both D.C. and Hungerford, who both mentioned that there are plans to change up the lists every year. I think that’ll do wonders to keeping the format fresh, though I can’t see the staples being replaced anytime soon, but thats the same with every format, Masters and Iron Gauntlet Included. There has also been talk of limiting or banning casters, and I can see why. The top four were: Witch Coven, Witch Coven, Epic Skarre, and Morvanna 2. Seems like there might be a bit of an unbalance there, With the Witch Coven represented well, Cryx represented well, and only the eventual winner with Epic Morvanna to break up the monotony. I look forward to it next year!