Over the last year I had my articles pretty well delineated for me. The Tour took up most of my writing and much of my play time. Now, with the tour over and the new year coming forward, I’ve got a very strange and powerful feeling: Freedom. I don’t really know what to do with it.

After over a year of simply trying to get my head around the complexities of the faction in the shift to a new edition, I am finally left to my own devices in trying to figure out what and who I want to play, and for what reasons. Its a moderately intimidating path to set down after so long, and while I am glad to be rid of the shackles, its going to be strange embracing my own thought processes again.

What the Future Brought

Looking into the future, I can see me playing an absolute ton of the new themes, Slaughter Fleet Raiders and Scourge of the Broken Coast. Revealed on Tuesday, we’ve seen a number of new models, units and sculpts coming out for Cryx.

First, In February, we have the new resculpt of Deathjack

Which I have been waiting for forever (If anyone wants one, I have a Metal Painted DJ for pretty cheap!) This model screams Cryxian and Nightmare and everything I want in the faction. Its a great, new rendition of the classic sculpt.

The rest, which I am sure you’ve seen as well, I’ll just link to LOS’s facebook here, Where I pulled them from.

The current release schedule, to the best of my knowledge, is as follows:

That leaves the following models for late April or May
Black Ogrun Smog Belchers. I assume that this is because they will be in a dual kit with the old and maligned Black Ogrun Boarding Crew, and I look forward to this.

Its going to be a very different world, for me, once the new changes go live and models get released. Denny 2 will likely be on the table with her rework, as will the Skarre 3. I would really be interested in trying out all the new combinations of models, but I’m pretty sure the way the theme lists exist, their caster will all but write the list for them.

Until that point, though, there are plenty of games I can try and get in, including at least two more tournaments in February. In these, I’ll need to be prepared for the local heavy hitters – Cygnar, Grymkin and Protectorate. I’ve also got to have a plan for what to do when Ghost Fleet takes a little wack to the side of the face.

Honestly, what I think the plan is going to be is that I play a limited palette of standard and great casters. Terminus, Scaverous, Denny 1 (even after her changes) and Coven. Getting to know these casters a bit more may help out with smoothing the transition to this new and liberated life, as well as be able to bolster me when I am playing the models that come out and are both new and shiny, making it likely that I fail more often than not with them.

The week after the Cryx CID goes live, I’ll likely do a breakdown of everything, what I think of it now, and how it affects the greater Cryxian world, but I want to wait and see what type of changes they make over their last document. While I expect I’ll be pouring between documents, looking for changes in each and every entry, I honestly don’t expect a ton of changes. Until then, though, I’m stuck playing the same old cryx we’ve had for about six months, and that has been pretty good to me.

The first two games I played after the tour were were with my first loves in the faction, and a caster I was barred from playing for so long, the Big Boss Man himself, Lich Lord Terminus. 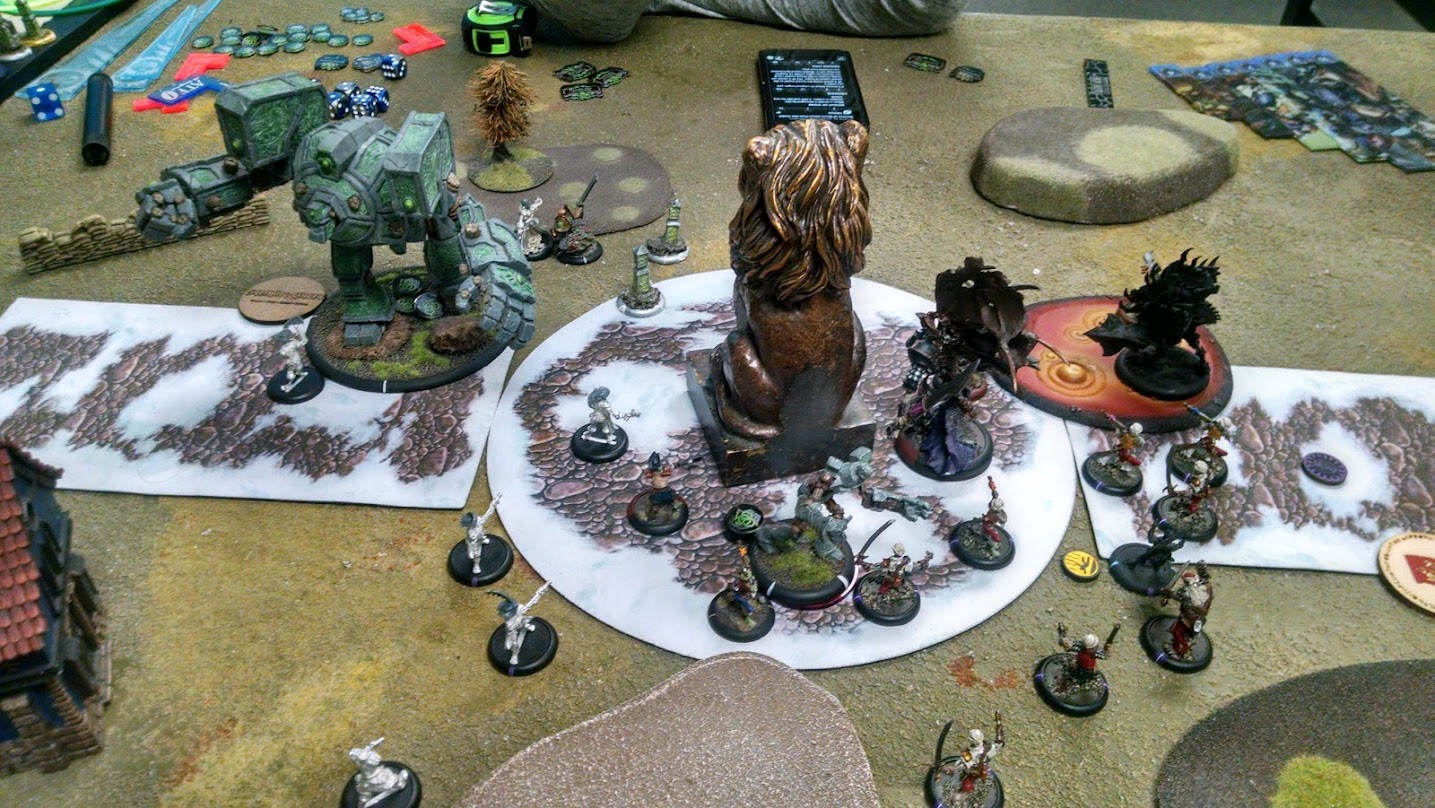 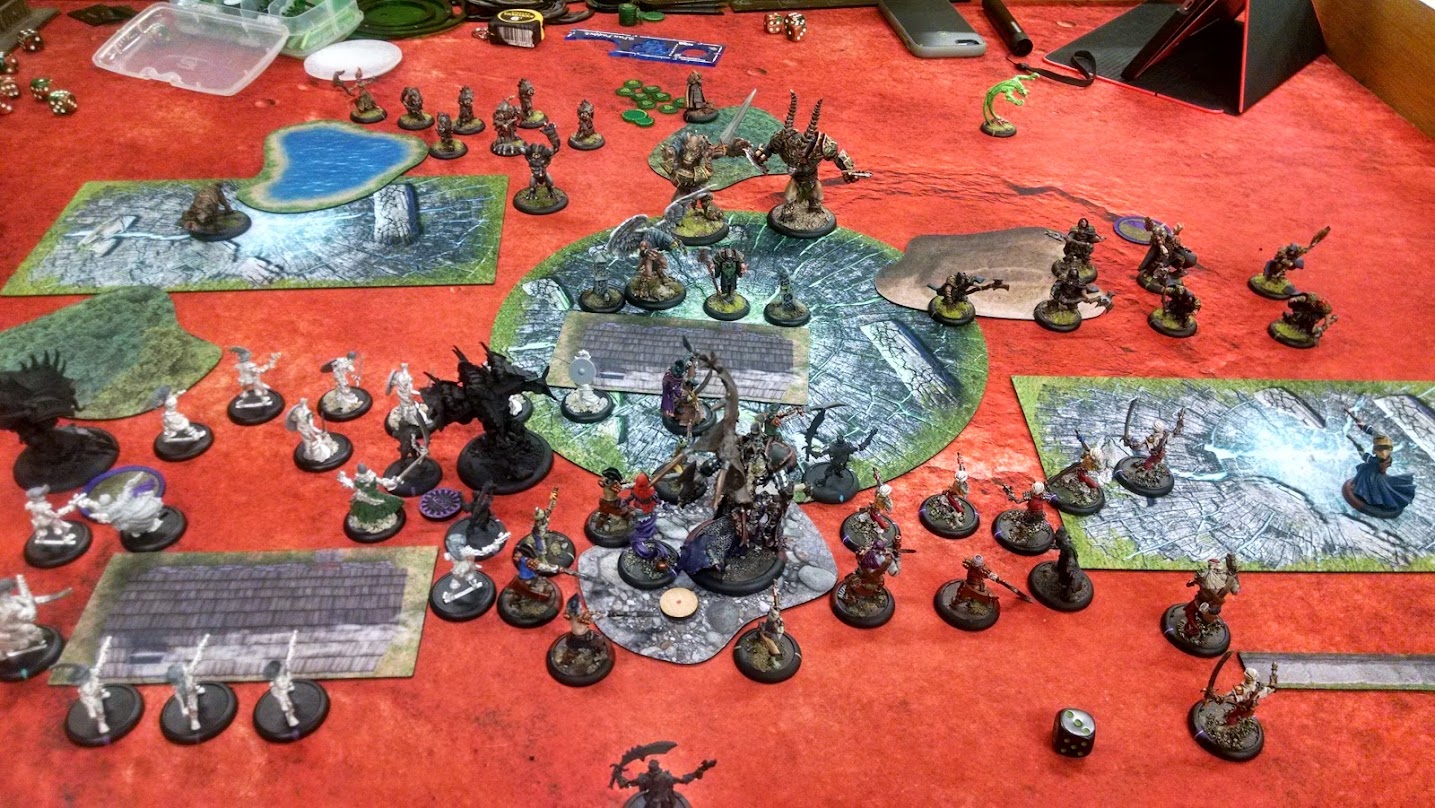 This list is a little list that I wanted to run, but didn’t have the models for at the start of the edition and when I got around to playing Terminus in March of last year. Now, the list is coming together solidly, and I think its getting some teeth.

I started out with a pretty simple list, one that made me happy to be fielding so many models. I didn’t really want to include the Wraith Engine, because its such a big thing, and Terminus doesn’t flourish with big things.

The first game out, against Baldur 2, gave it a hell of a test. The Wold Monkey was something I simply couldn’t kill in this instance, and I knew it from the start of the game. I was deathly afraid that my opponent was going to do something tricky with it and just straight up win the game, knowing that I could never do anything about it. Instead, I ended up flooding him with an unending pile of bodies, and running around him with Blackbanes Ghost Raiders, to seal the deal by collapsing my right flank on him and taking the scenario at that point, and finally the assassination. It ended on an upnote, but I knew that I needed to at least look at the weakspot in my list: Hard Target Removal.

At the end of the day, after a little bit of tweaking and making sure that I was still able to get what I wanted out of the list, I settled down on this little gem.

Very little has actually changed in this list, model wise, but the whole of the lists tenor has changed because of it.

I dropped the Inflictor for a Seether. With all these tough, recursion based sacrificial pawn outlets around, I simply didn’t need the extra protection, what I needed was extra oomph. The Seether Provides.

And then, I traded out the four Blackbanes Ghost Pirates for Ragman and a Machine Wraith, which I think is pretty fine. Those four models were going to tilt the game over the edge when it was already there, but they weren’t going to win me a game I was losing. I do believe that a Machine Wraith and Ragman can both win me games I am actively losing, if applied correctly.

In the first test run out, I was able to land Terminus, along with Ragman, into two (lighter) heavies, and was able to end the turn with both of them out of the game, thanks to Ragman’s Death Field. Its a strong ability, and one that simply turned the tide against the stalker and the Riphorn. I do not believe that I could have killed either one, let along both, without it.

I do think there is something with a Wraith Engine worth building, but I can’t really get behind any of them. He’s such a giant piece and needs to be taken care of just like terminus, that I wonder what I should be doing with him, and I don’t even know what I give up from the list to get him. I’ll keep plugging away until I find something.

In the coming days, I’m likely to get some game time in with the Coven, more Terminus, and eventually Agathia (Who I intend to take to Lock and Load for champions) and Scaverous. It should be good times in the future.

What lists and casters do you think deserve another look?

and don’t tell me Sturgis 2…