I find that many times, Making lists is a very boring endeavor. Because of themes we have a fairly set regimen of what is known good, what is known to be mediocre, and what is considered the unplayable. It feels, fairly often, that all you’re doing is swapping casters within the known lists. This week, though, I’ve spent a lot of time in the dojo making lists, and it feels very strange.

One of the side effects of new releases coming out is the palpable and empirical newness to a just-assembled model. They are clearly screaming to be played, and need to have lists built, either specifically for them or simply containing them. Over my years, I have discovered more than a few models I found to be much better, or much worse, than originally billed once I got them on the table and got a few reps in with them. Last week, I went in length about the lists that I wanted to try out with the Black Fleet models, but it also got my brain working on other, different casters that people had brought to my mind.

This is the absolute and prototypical spam list. Nearly everyone and their mother who has played warmachine has heard of this list by now. Its a tough and brutal list featuring Cryx Jacks that don’t act like Cryx Jacks. Def 13 is problematic when you’re looking at arm19+ all the time, and becomes a significant problem at 21 for ranged. With Mobility, Calamity, and Ashen Veil, he’s able to ask questions that many Cryx lists simply can’t answer.

This list isn”s some sort of revelation for a cryx player to want to play, but it is something different for me to want to play it. Instead of trying to get the most infantry on the table possible, I’ve instead opted for trying to crush everyone under the mass of Warjacks. At the begining, when it was announced that there would be a shift in how Unyielding worked, there were a number of people who went all in and grabbed a pile of slayers right off the bat. I did not, and I didn’t think it would work. Well, today, with 8 slayers sitting on my table and a 9th on the way, I’m really interested in seeing how this feels on the table. I’ve even gone and names all my Slayers.

We’ll see how they perform when they get on the field.

Following this, I also like a really interesting Asphyxious 3 lists that a variant on the theme: 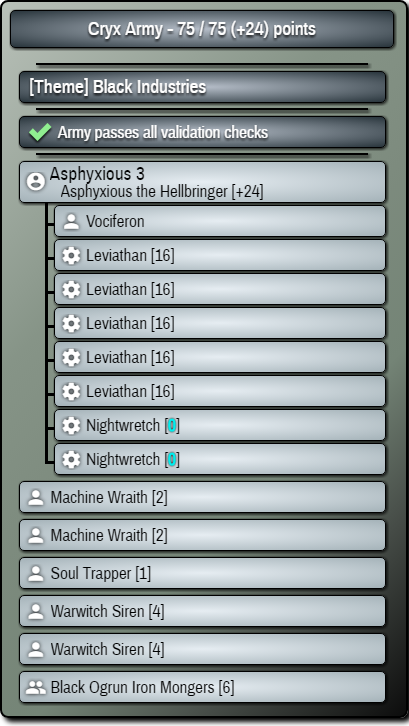 focusing on taking big, meaty warjacks that are hard to shoot down and hard to punch out, the leviathan really packs a punch in both directions. ARM 20 or 22 is solid, especially for Cryx. The big guys guns can reach up to P+S 17 against a single target, and that target will get burned right down if I can get enough of the leviathans into place. Additionally, this list can shoot down a surprising number of infantry, weather the melee storm if needed, and continue chewing them up over time with sprays, hex blasts, and P+S 17 melee attacks. I really like the cut of this lists Jib with high speed, high volume and solid melee.

I’m guessing with the next list you’re going to sense a theme comin’ on, and you’re not wrong. This list is a take on the Gaspy 3 9 slayers list that has a few less slayers, but can punch a bit higher up the chain. Again, pulled from someone who told me I have to play it and then went and won a convention, Denny 2! 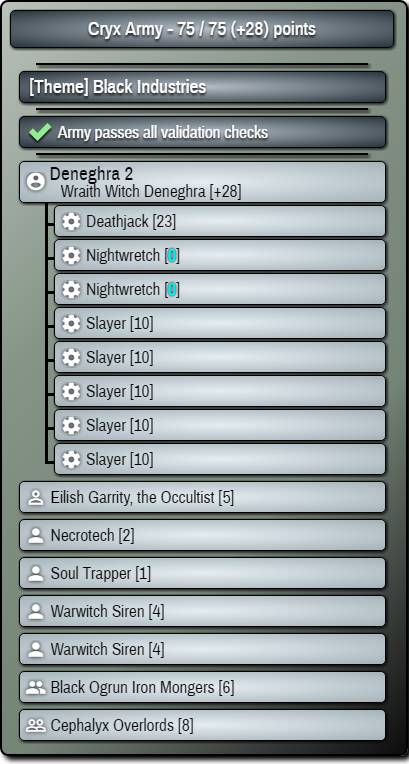 This list is, for all intents and purposes, just a clone of the Asphyxious 3 list taken to a different caster. We’ve got the big, hamfisted jacks, the quick slayers, and the support. What this list does, though, is bring support to the list that the other one doesn’t have, as well as an excellent spell list to compliment the way this list wants to run. Any list based on big models is going to have to worry about getting bogged down, and hellmouth is oftentimes a perfect solution. Add into that the sprays from Overlords and Sirens, as well as the repair that the Black ogrun bring, and this list can get punching above its weight class and numbers extremely quickly. I also really like defensive feats, and Denny 2 might have one of the best – definitely the best in the faction. I love this caster so much its going to be hard for me to let go of her, but I will be, now that Skarre 3 has arrived, but I theorized her a lot a while back.

Working on this same theme of Warjacks forever, I’ve got a list that will positively not be found on the internet. Its one I pulled out myself because I’m pretty sure no one else wants to look at this caster sideways. 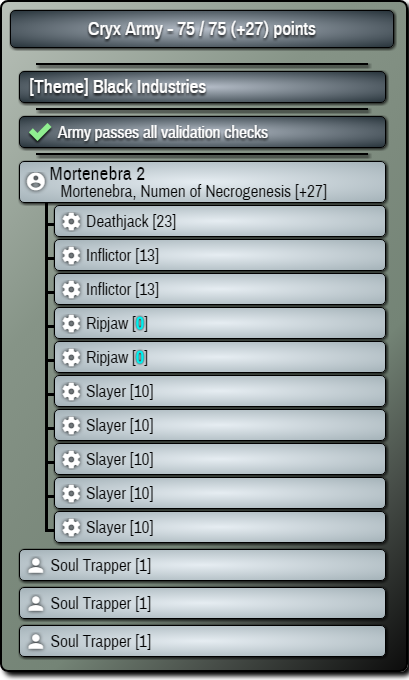 Riffing off the 9 slayers list (again) and building a list that excels in melee while also delivering themselves, I really like the potential in this list. The big thing that is going to be the problem with the list is that the caster is hard to protect. I’ve done the best I can with two Inflictors for shield guards and LOS blockers, I’d have to be extremely careful about what to drop her into. I do think that this bonanza of Warjacks could really give her list the possibility of scavenging repeatedly. Scavenge, though, is such a terrible field marshal, however, that I’m not counting on that as the main draw for the list. Instead, flank soul gathering, and curse of shadows gives this list a lot more teeth than its looks to on the surface.

While I enjoy my Infantry heavy faction, there is this part of me that really wants to play these spam lists to see how they feel in a faction that has always been devoid of these strong warjack options. Now, to get to assembling my now huge list of models still in boxes: