Last week, the CID on the 15th anniversary casters wrapped up, and with it the pretty much released stats of the Warcaster 0’s, who all look interesting. I want to take a look at Denny 0 and see what lists and thoughts she brings up.

For those who don’t know, Privateer Press, for the 15th anniversary of the Warmachine Game, introduced at the tail end of the CID cycle for the crucible guard,  four “0” solos. Each solo represented the journeyman state of one of the games first warcasters from the first four factions of the game. Sorcha 0 is a Winterguard, Severious is a Scrutator Potentate, Caine is a Journeyman and Denny 0 is an Initiate Warwitch. Each of them was the distilled essence of their character boiled down to their signature abilities and spells.

What I am interested in most, is Denny 0. She had an interesting path through the CID cycle with the other 0’s. Severious started out as an extremely strong passive buff and durable, Cain could enable shots into the deployment zone and bounce around the Board, Sorcha gave a passive buff to the Winterguard and her army, and Denny had a debuff.

Deneghra had, at the start of the cycle, a single and powerful debuff (Parasite) and really nothing else. Her second spell was first Dark Seduction, and then Venom.  Over the course of the CID, she changed her debuff to Marked for Death, but the dissonance between a defense Debuff and needing to hit a high defense target with a low accuracy model to get use out of the debuff caused friction about her utility. The big problem that the Cryx players had was that while Deneghra was powerful, she was both binary and boring. When she worked, it was great, and the -3 arm would likely be back breaking, but if she failed she was likely gone immediately. She’d also likely be removed upon the success of the parasite, because she’d be so close to the opposing army and target that she’d be killed just like any other 5 wound Stealth journeyman.

Now, we’ve come to pretty much the final form of the model. While changes can happen, I haven’t really seen too many either rollbacks or drastic changes from their final CID forms. Always anticipate that she could change, but planning for her in this form is probably ok. Lets take a look. 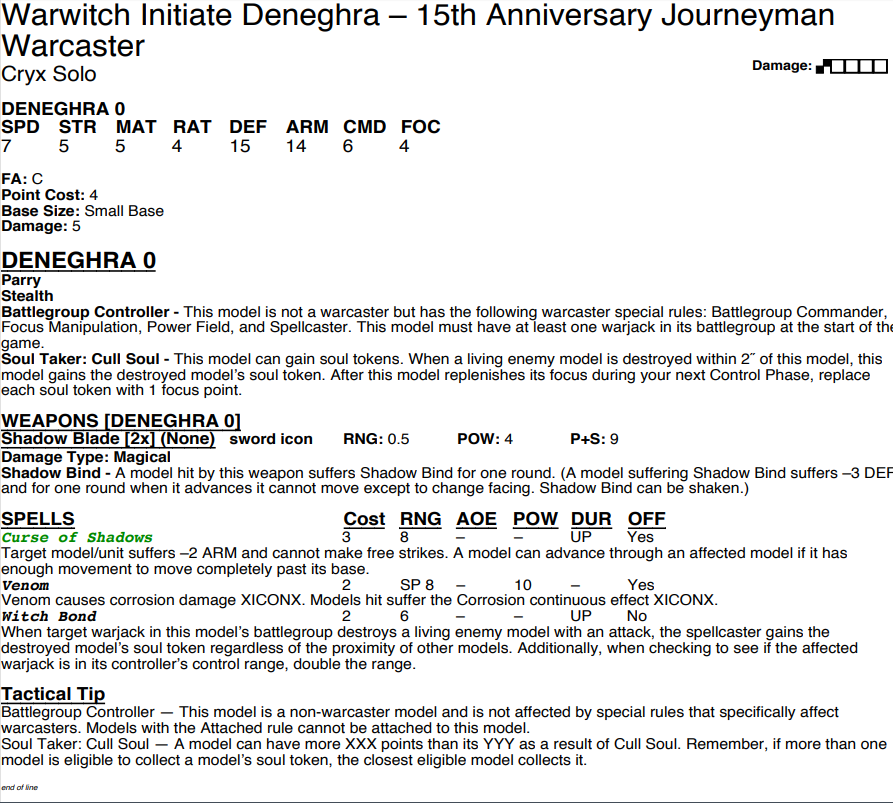 She has reasonable stats for a 4 point solo, Good Speed, bad MAT, solid Def and ARM, miserable FOC – but fine for the 4 point journeyman role. Parry and Stealth are great defensive abilities, and Soul Taker can net her huge efficiencies if she can gather souls.

Her weapon is P+S 9 with shadowbind, so nothing great damage wise, but if you can get the shadowbind off it could change games. Her spells, though, unlike the other three, are really why we are here.

Parasite has been dropped out for Curse of Shadows. Curse is a great debuff, and freeing up the order of activations for that debuff is really important. Its a strong ability to arm debuff three targets – potentially 4, over the course of a given turn. Additionally, Curse allows a form of freedom of movement and positioning that is not normally afforded many armies, and can really come in handy when a unit is jammed up by the enemy, but the ‘Caster has to go later in the turn.

Venom is the perfect spell to replace Dark Seduction. I had come around on Dark Seduction by the middle of the CID, and was kinda disappointed to see it go. While many full casters might not use the spell, its of increased utility when its on a solo that isn’t losing a huge opportunity cost to get certain models out of zones or away from flags. Venom, though, allows the usage of the most boosts, and therefore gets the most out of the souls that she can gather, ensuring that her FOC pile isn’t simply dead weight if her jack has a bonkers turn and nets 4 or 5.

Witch Mark is an amazing spell and I hope they give it to more casters as time goes on. Its a simply delicious and effective way for Deneghra to gather souls and put a combat jack out there that may otherwise have just been dead weight.

Before I move on to lists I want to try with her, I do want to mention that there were a pair of quality of life changes to the game to enable more interesting battlegroups for the journeyman Warcasters this cycle. The first was that a junior can now take their bonded character jack in any theme force that the journeyman is allowed. While this is a bit strange with Deneghra 0, as nightmare is the nameless Slayer that killed her and was later transformed into the monster it is, it is perfect for the other casters, including Aiakos1 and any Jacks/Beasts they make for Una, Horgul, Zaadesh, Elara, Gaston, Tristian, Malakov, and Jakes. The second change was modifying the Corruptor and the Devout to work based on their controller, not on their warcaster, making them function with the Jr Warcasters in general. It is a very, very neat addition to Deneghra, as the Corruptor is a jack that is on my radar as a solid piece to start including in more lists. Ranged is good.

Denny is a solid model that brings utility and a pretty long ranging, independent jack or jacks to the lists she’s allowed in. Currently, and this is unlikely to change, those two lists are Black Industries and Infernal Machines. In neither list is she free, which is a bummer as all the other journeymen can be free in at least one theme list. She does have her free Jacks in Black Industries which is likely an arc node for tossing out curses and Venoms, which isn’t nothing.

Black Industries gets some interesting play out of her. Casters that don’t have Curse of Shadows will enjoy tossing their jacks into units and models that are 2 less armor, and they will enjoy walking their models and/or units free of engaging models when a jamming unit turns to shadows. I also like the idea of taking black industries with 2 free Nightwretches when the main warcaster only wants one arc node. one gets witch mark, the other is for Venom and Curse.

Infernal Machines gets a lot out of her, again freeing up models and units with Curse, and dropping the armor on high value targets that just need to die. If you tried really hard, Mortality, Dark Shroud, Rust, and Curse of Shadows drops a targets armor value by 8, which seems pretty nice and is quite doable. two POW 18’s, or even just the 16’s, will do a Mechanithrall good.

I expect that she’ll have a place with pretty much everyone, but the casters without a unit wide Arm Debuff that would look strongly at her are:

The ones I see getting the most out of her, both because of their general builds, their personal kits, or their ability to suddenly find new life with this spell in their arsenal, are Morty 1, Terminus, and Scaverous.

Mortenebra 1 in Black Industries lacks the turn-over-turn ability to tear down or roll through models. Being able to overrun over and/or through units without needing to trample – and thus limiting it to small bases could be absolutely huge for her. One of her big weaknesses is that she’s lacked an Arm debuff for ages, and with either Parasite or Curse of Shadows, Denny 0 will contribute. The rerolls on feat turn make it an even sweeter choice, as she can toss out either the debuff or the venoms on feat turn knowing that it has a stronger chance to succeed. 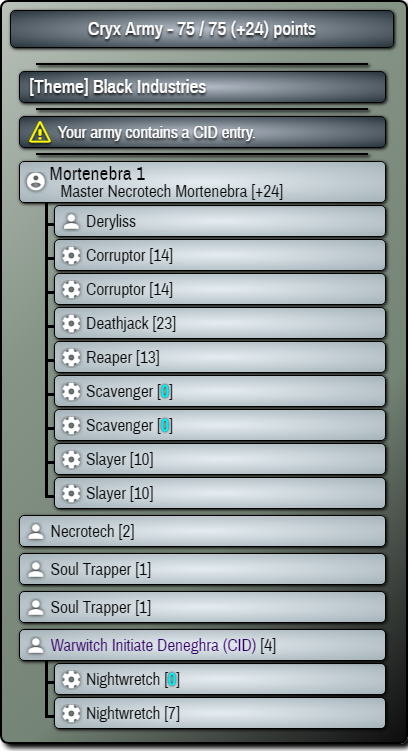 Terminus is a big, painful bruiser, but many times I have to commit him into the enemy to get real work done, and that can mean that I get killed if I don’t break the enemies back right then. Its not my favorite strategy, to be honest. With Ragman and Denny 0, however, the chances of bringing down hard targets with his Infernal Machines horde of abominations is strong.

Finally, we have Scaverous, who is the clear and present front runner for Denny 0’s favorite pall. With the ability to trade souls for rerolls, and his feat boosting her magic attack rolls, she can be turned up to an extremely scary level. With a living arc node and 2 souls, she can toss out 3 fully boosted venoms on feat turn, with rerolls if needed. Scaverous also brings a Def debuff, allowing her target to be even juicer if needed. Boosted 6’s on venoms can clear an absolute ton of infantry. 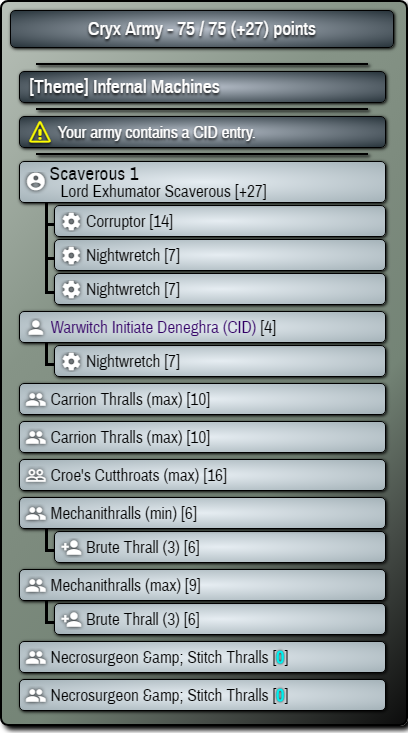 What lists are you looking forward to playing? Where are your favorite combos? What do you want to change with her? so much cool things to discuss about this new model