On Sunday I was able to get about 1/3 of a game of Relic Knights in. While not ideal, this was the first chance I had had to be able to throw down and get a general feel of the game. We had to call it early, but it was extremely enlightening.

I think I am really going to enjoy the game, honestly, because it has the feel of a fast paced simple game, while also being simultaneously deep and complex. The rules were easy to understand we only went to the rulebook a few time, if at all. It was a Battlebox game, which cut down on the complexity, but it was still enjoyable.

The Esper Deck is the foundation of the game, in my opinion, and is the second greatest resource of the game that needs to be managed – the other being the queue. There are 6 colors represented in the Esper deck, with each card having a primary and secondary Esper color. The primary color is worth 2 Esper, and the secondary color is worth 1. Each Color has six cards on which it is a Primary Esper, and six cards on which it is Secondary. The Secondary Esper on each card is one of the Primary colors allies: Blue (primary) will have either Green or Purple as a secondary, and so forth. You can tell the allies and enemies when viewing the Relic Knights logo, much like MTG

Every model has actions, and upgrades to those actions, called presses, that take the actions to 11. Declaring an action costs Esper as does declaring a press. Each model also has a set of Melee, Ranged and Psychic stats that allow you to draw cards both when making and defending against an action after the action is declared.

Each Faction tends to have three colors they use for their actions: Their main color, and the colors next to it. This means that my Star Nebula Corsairs tend to use Orange, with Red and Yellow as additional resources. This means that there are four card types that are completely useless to me: B/G,B/P, P/B, G/B. There are only 12 varieties of cards in the deck, which puts a full 25% of the deck into a completely dead state for me. Squall and Iron Chef can mitigate that nearly completely as they have abilities that require blue (Squall) and green (Iron Chef). There will be no card, if I have them in my crew, that could not be used.

But, outside of that it means that it is vital to have the right Esper in your hand at the start of your activation, and without it, you could completely waste your turn. Refocus isn’t always bad, but its not the preferred method of using a unit. 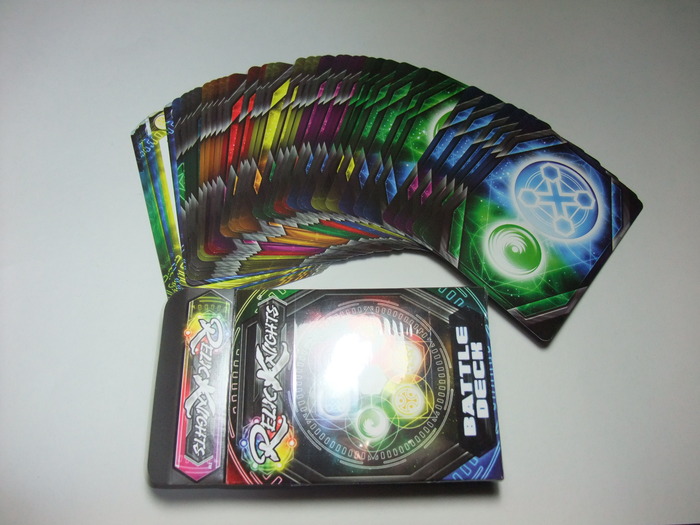 These! Get Them in your hand!

This all comes to a head because in the game I played, we were using the deck moderately wrong, and created a much worse play experience for me, thinking back on it, than I remembered having during the beta.

The first error was when I refocused, I was pitching my whole hand and drawing back up to five. This is not correct! Drawing 5 more cards and discarding down to 5 afterward is superbly better than the version I used. don’t try it at home, it sucks.

The second one was when, at the end of the turn, I had less than 5 cards in hand as an Attacker, I would simply draw up to the 5 cards we needed instead of pitching any dead cards and drawing to 5. This created an effect where both the defensive portion of a turn and the following activation were completely screwed!

This may be why a compatriot of mine is convinced that things die to simply, and that I am convinced that models almost never die. I was just barely scraping by enough to do damage, and he was using everything to his advantage to pull together multiple powerful attacks. I’ll have to try it the right way!

It can be a real bear to manage, as well. You have to factor in the board state, the cards in hand, the enemy queue, the enemy actions that the models in queue are likely to take, and even what you are planning on putting into the queue next. Its a ton to manage, and its the puzzle that I enjoy trying to solve. One interesting thing that I noticed as we were playing is that the queue makes the game enjoyably susceptible to surprise. If your active unit does something that the player is completely unprepared for, they may have to wait until their third activation to respond. By then it could be to late.

Example: In the game I was playing, I was expecting the Noh Berserkers to go after my central objective, and had models there to defend against the possible threat. Instead, when he activated them, he double-moved them out towards my far objective and my broadsides. He then immediately added the Berserkers back into the queue. With my Broadsides out of the queue when I started my turn, I we traded activations and then he was able to go with his Berzerkers, stealing a token from my objective before I could even attempt to shoot him, due to the broadsides acting after his second activation with the Berzerkers.

It was an extremely awesome revelation, and one I plan on trying to figure out how to both mitigate and exploit. we currently only have 2 models in the queue, as we are playing battlebox and 35 points, but I can only see this being exacerbated when we hit 50 points, though having an extra slot in the queue delays response time, but it also delays reactivation.

Finally, I want to talk about the objectives, because they are the central focus of the game. The starter boxes come with Objective tokens and a set of standard tokens, because you’ll need a thousand. I found that the placement of objectives can really set the tone of the game and is something that really needs to be taken seriously. Placing your objectives too far from the enemy will stymie your ability to get any of your objectives completed while you run across the board, and placing them too close will enable your opponent to overrun you and complete their objectives. I think its going to be a fun and difficult mini-game trying to figure out where your objectives need to be on the table.

When I get a full game in, I’ll post up the battle report, but I am still rocking the Cephalyx. I’ve gotten 7 models painted and have some 16 more to go, including three monstrosities. I should, provided all goes right, have another Cephalyx report on Tuesday!