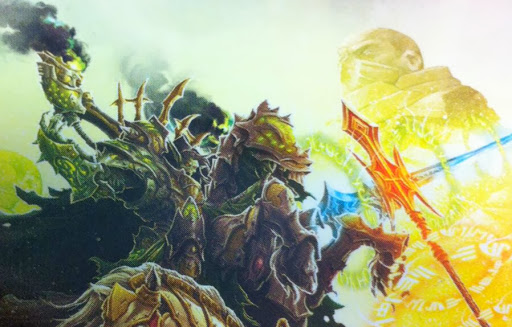 Ruin is upon us.

With the new year, I’ve put aside my Skorne, and for the next 18 or so months, I’ll be playing Cryx, the army that brought me into Warmachine and the one that I love the most. Its a faction that feel like how Warmachine was imagined to be played, which is a start contrast to the types of games I used to play. Coming from the long, brutal slogs that are Skorne, it is going to be a refreshing change of pace to play with a heavy assassination hand.

Preparing to play Cryx again started with the previews of Deneghra 3 in No Quarter and on the cover of Reckoning. I knew I was going to play her simply because she was a new release, but I also very much liked her artwork, which was excellently transferred into the sculpt of the model itself. Once I had seen the model, I was sold, and I knew that I had to get my hands on her as soon as possible.

Unfortunately, luck was not kind to me, and I didn’t receive the model until just before Christmas. I’d put off putting her together long enough (and Fallout had come out and absorbed my free time) that when I began putting models on the table again, I wasn’t prepared and had to shift to my second option, Goreshade 3.

I wasn’t bothered. Goreshade 3 was on the extremely short list of casters that I’d been unable to play during my last go round with Cryx. Most of my playtime in Cryx had been dedicated to casters which I found to be either enjoyable or tournament worthy, and though Goreshade 3 is both of those,  I was focusing on a pair of previously unexplored, tournament worth casters: Asphyxious 2 and Deneghra 1.

With the return to my roots, I’d decided that I start with casters that either I had not gotten a lot of play out of, or ones that I’d found myself to be fairly poor with. Unlike the majority of Cryx players lists, I think mine has a few surprises.

Deneghra 3, Goreshade 3 and Sturgis 2 are casters that I’d just not had the time to play last time I was in the faction. They are new casters that I really need to take some time, get acquainted with, and start to make sense of.

Goreshade 1 has been extremely boring for me for an exceptionally long period. With a list that I stole and modified from the internet, though, I’ve become much happier with him. I didn’t get to play the list much, though, and am very interested in trying to take his list when it gets Inflictors in it and turn it up to 11.

Skarre 2 I’ve tried a few times, but mostly it was simply trying to get a few pieces to work. I think her traditional list building ethos combined with how I play the game could be extremely enjoyable, and I look forward to trying to play her in a much more standard fashion

Terminus is a caster that I’ve loved from the start of the game. He plays my style of game, forcing players to react to him and slaying anything that gets within his threat range while also being potentially impossible to kill. His list theory looks to be something I can really sink my teeth into and start making a variety of lists that fit me.

The last two are the casters that I think people will be surprised with. These two necromantic terrors are ‘Casters that I just have never felt comfortable with. Each and every time I try to affect the game with one or the other they get exploded by the opponent. Its one of my great frustrations with the game that I cannot seem to play one of the two very best in the faction, even though everyone else I hear of can make her hum. For some reason or another, she’s just not connected with me. Thankfully, with a new sculpt coming, I’ve got a second chance to pull her out and make her work. I’ll at least be giving it a try.

Mortenebra, on the other hand, I seem to get to work just fine, I just can’t seem to get the army to finish the deal. This failure inevitably leads to her with her ass out in the wind and dying to something stupid and dumb. Its not my favorite way to loose a game. Perhaps, even though I hate the thing, I’ll take her theme list out for a spin and see how it can perform. I just have gamer-PTSD of having speed 1 Cryx jacks in MKI

From here, the game plan is simple – get as many reps in as possible before going to a tournament with a new faction and a new caster. For the first little while, probably until march, I am going to focus on playing Deneghra 3 and Goreshade 3 as a pair, trying to figure out who and how they cover while also making sure that they are able to be effective and create problems for my opponents. I think I’m doing well with Goreshade 3, but I need about 3 more games to sort him out – I keep positioning my stupid Helldivers poorly.

The lists I am currently trying out are:

The Deneghra 3 list is a work in progress, and I have a concept for using bile thralls w/ Goreshade 3 because spraying down a whole army while they are frozen seems pretty good.
except the one time I had it all ready to go, I fight Croak Raiders. That damned unit is so good!