A Flush of Games

After a number of weeks getting a few games in here and there, the tail end of last week was just chock full of Skorne. While I didn’t do as well as I would like, I can feel myself climbing up that understanding ladder. I’ve got a pretty solid grasp of fist, and Mordikaar, through 10 games, is coming along smoothly.

I’m going to walk through them like I normally do, and I’ll put some of the pictures up here. I played fist twice, during the tournament, and Mordikaar 4 times. Fist performed admirably, but Mordikaar is a very high ceiling caster that I’m just starting to understand.

To that end, I played Mordikaar first as preparation for Philly games con. I’d managed to set up two games in two different stores thursday night, and was ready to break him out.

My Mordikaar list, as I’ve been talking about, was

The first game I had set up was against a friend of mine who wanted to try out the pirate Boat, which was fine with me. I’d brought the Mordikaar list to eliminate swarms. We rolled up the scenario, and got outflank

This is a scenario I am deeply familiar with, having played a ton of games last year leading up to lock and load with the Coven. I ended up getting first turn, and deployed fairly standard. His army had

He deployed the Galleon to my center-left, along with the Deck Gun. To the right was Shae, all the support solos, Aiyana and Holt, and the one unit of Sea Dogs.

I Deployed the Cetratii Front and Center, with Incindiarii covering my left, along with Tiberion. To the right went the Nihlators. Behind all of that was Mordikaar and all the support.

He AD’d the press gangers to the left, and walls unit to the right, gunning for both flanks and threatening up to 28″ on turn 1!

Turn one, for me, as a touch of a cautious advance, knowing that If I was to aggressive, he could pop feat turn 1 and get a bit into my lines. I wanted to see if I could get him with the feat turn 2, so I could have a bit of a better position. Thankfully, thats exactly what happened, as he rushed across the board, but didn’t feat.

I took my second turn and ran full bore into the guts of the board, popping my feat and flooding my right zone. My incindiarii wandered over and tried to pop some pressgangers but failed to do anything but light them on fire, which was just fine. Under Feat and Hollow, I was pretty confident that I would be able to weather the pirate storm.

Thankfully, I was able to do just that. Though I lost models on the feat turn, it was an acceptable number, and mitigated by my ability to revive come the next turn. Both zones were contested, and the Galleon wasn’t yet committed, so I was unable to really get ahead on scenario. Instead, we traded pot shots back and forth, where I was able to remove Zira, and thanks to Nihlators being undead with Hollow, he wasn’t able to return any to life.

Have you ever been so greedy in a game for the assassination that you know isn’t going to work, but you can’t stop yourself for the desire to make it work. I have! at the end of his turn 3, Shae was in the woods, almost in the center of the table. I had the Shaman, the Raider, and the Soulward ready to take him down. Sadly, he’s DEF 19 in the woods, and that’s just not really an achievable target. For shame, though, I went for it, and started with the worst model possible, Mordikaar. I resurrected two Nihilators, snipped myself, and boosted my gun into the woods, needing 12’s. Unsurprisingly, I failed. I had one more fury on me and felt that if I could drop some damage into him, he’d play a little defensive, so I boosted the damage after I missed. Ah well, I’ll get him with the Raider, who needed boosted 12’s using eyeless sight from the Soulward to ignore the forest. He, too, missed. At that point I aborted, not feeling I had enough steam left, and sent the last shot from my Shaman into First Mate Hawke, who I had come to realize was within stab distance of Mordikaar. Sadly, the Evil Eye went wide as well, and all I had left was to hope that my opponent didn’t realize that Hawke was in charge range. Sadly, that didn’t happen, and even after remembering that she doesn’t have pathfinder, she still was in range to kill Mordikaar.

Which she did handily.

I let my bloodlust get ahead of me there, and I should have kept playing the correct game for scenario. Instead, my opponent capitalized on my greed and put two swords into the top of Mordikaars noggin.

Fresh from the loss, I took off up north a bit to another local store, and got in a game there against a good friend who loves himself some Butcher three.

This time, I have pictures!
We rolled up the same scenario as before, and he took first turn. See Deployment below: 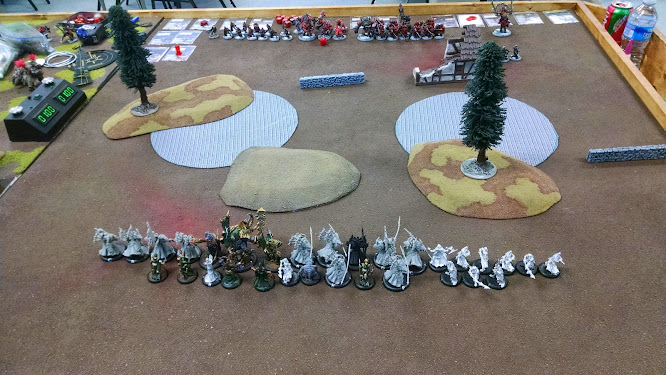 Our turn 1 took on the standard run and position game, with me popping my feat to protect from the inevitable turn 2 clash. It saved me a bit, keeping the Kayazy away, but I gave it all up the next turn. I faded back from the left zone in fear of the kayazy killing everything I know and love, and I paid dearly for it. 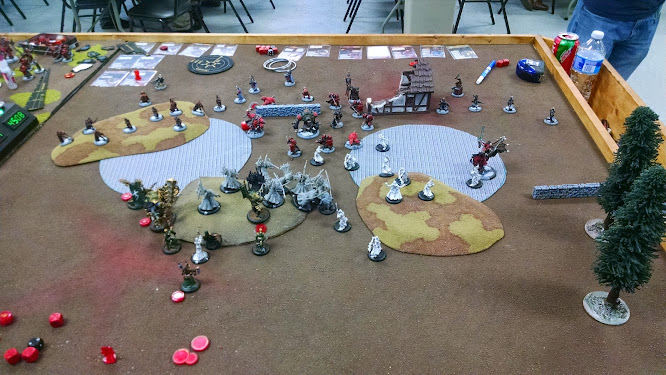 Me fatally fading from the zone.

From here on out, I think it was just formalities. I was pushing for the zone with the wrong models, leaving the left zone completely open to domination and swinging the game for the win to butcher 3.  With the Kayazy coming into the left zone, and the tough Nihlators holding the right, I think I should have committed whole hog to the Kayazy zone. They can only kill so much before they run out of steam.

Honestly, writing this up, I think I am much more timid than I need to be with Skorne. Going second is something that can really cause your head to turn inside out as you figure out how and where you can apply force without getting completely hammered. Its not an easy task, even with Cetratii. This game was a ton more fun and a lot closer than I make it seem, but I think it simply boiled down to me not having the capacity or concept to contest both of the zones while making a bid for the game in and of itself

With those two games down, and a portent of doom on my shoulder, I headed into the crucible of Philly GamesCon on Saturday. I was extremely excited  to go up there and play outside my meta, as well as seeing a couple friends I’ve not seen in a while. I brought out the Fist and Mordikaar, even though I wasn’t very confident with him, and took to the road. The trip was long and grueling (I don’t particularly enjoy driving), but I was thrilled to get there and start in it.

My first round was against another Skorne player bringing Mordikaar and, honestly, I can’t remember the other list. However, it was a novel Mordikaar list he chose to drop against me, and I chose Fist, thinking that they would have the endurance and capacity to absorb the inital assault.

We were playing Two Fronts, and I think he went first.

I’ll just be upfront here, as I have no pictures, but I got crushed. He was on his game, and just brutalized me. This Mordikaar list is fast, agile and can really put a hurt on everything you know and love from the start of the game. Ferox are amazing Revive targets, and Keltarii are giant problems when hollowed. My preference for a battlegroup is a bit different, but I can definitely see why he has what he has.

Sadly, I left his zone completely uncontested for almost the entirety of the match, simply letting him dominate while I putzed around on the other side of the board. He sent in Void Spirits and Rhadiem around the edge, tying up the Incindiarii and Karn, who, though eventually freed, were pretty solidly removed from the game. I was able to pop the feat and rocket Karn into Despoiler, taking him down under fury, the feat, and enrage. I also was close enough after sidestep to smash the gladiator close to oblivion. Sadly, Karn had sustained too much damage from his early assault, and died from the gladiator attack in retaliation.

The Keltarii were the real problem in the match, as they dug in so deep on turn 2, jamming past my friendly zone and stalling out the Cetratii. I wasn’t really able to leverage any of the Arcuarii well or even get good incindiarii shots, as the only good targets were Keltarii at defense 15!  Honestly, after suffering from their hands this game, I am swapping out my Nihilators for Keltarii immidiatly. If they don’t work, then I’ll go back, but I really think they are what I want and need in that list!

My next opponent was a minions player who dropped Maelok. Knowing that it was gators, I dropped fist. We were playing on a trench table, and I am extremely happy that I have pictures, because trying to describe this would have been insane.  We were playing Recon: 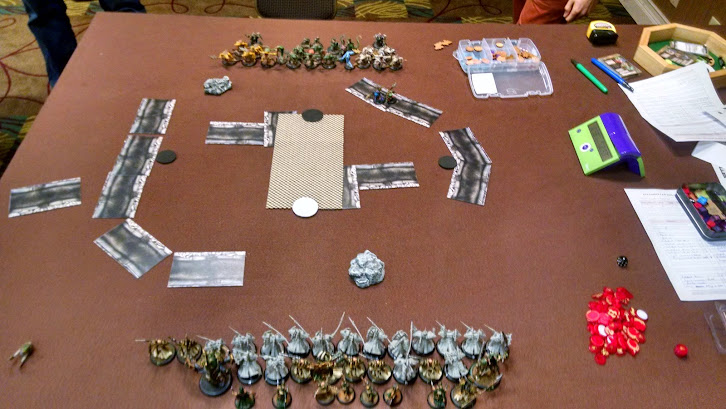 Man, This game was a slog! A million boxes on both sides as Fist and Gators just slam in the center for almost the whole time.

Round 2 I was able to use the Arcuarii to drag two of the Gatorman Posse leaders forward and put three total gators out of formation. It was an interesting technique, and one I may use again against warders or champions.

The game came down, after many rounds of grinding, to a scrum, once again, on my side of the board. I need to find a way to commit better and stronger than my current half assed semi-determination. Thankfully, he commited Maelok just a little to forward and I was able to get a Furied, enraged Gladiator on to Maelok. Feat turn or not, with three transfers or not, I should be able to drop him, or at least make his Beasts sad that they danced the dance. Needing 8’s to hit, I boost to hit on the charge attack, and connect. Unfortunately, the dice were not cooperating, and my roll came up almost as low as it could: 1,1,1 and 2 for column. Well, thats alright. I have another fist. Damage: 1,2. Ok. Tusks! boost to hit here, and do… 1 more damage. He took 7 and still sat on 3 fury, so my Arcuarii charging was just not going to get that last blow in to kill him. With one fury and Defenders Ward, Xerxis prepared to take a whole bunch of gators to the face. And boy did he! 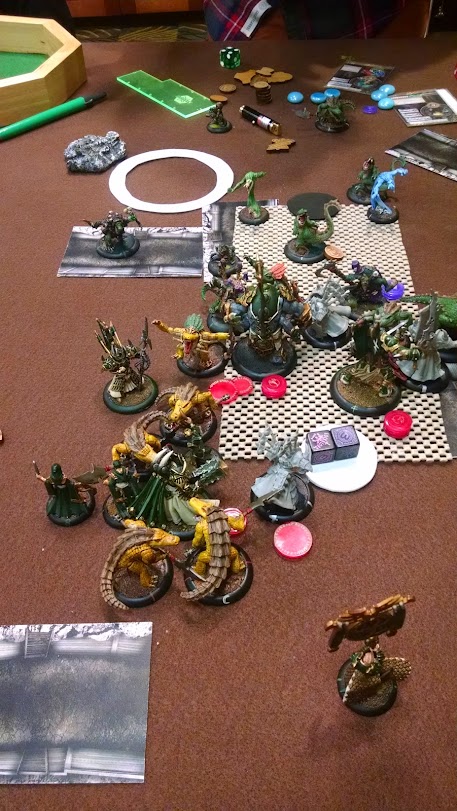 Three Charging Gators later – Two revived by Maelok, and I thankfully don’t have to say that I lost the game because I forgot to put up Defenders Ward on Xerxis. I didn’t even need the transfer, thankfully. The Gladiator decided to do his job this time, and pummeled poor Maelok to death!

I’ve got two more games to go, but I’ll save that for another time, I am sure that this getting long winded as it is. I will, however, leave you with pictures of the games: 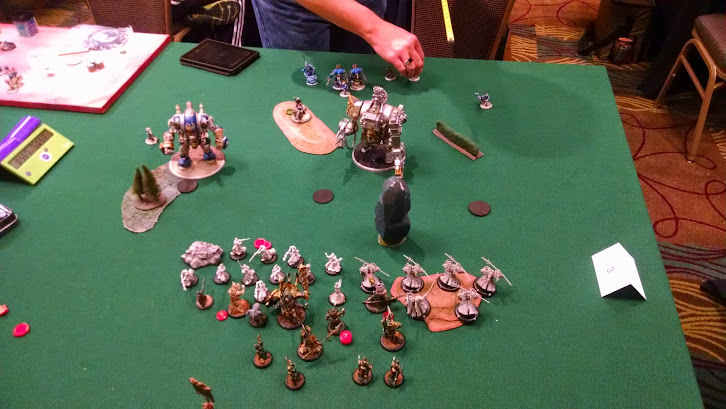 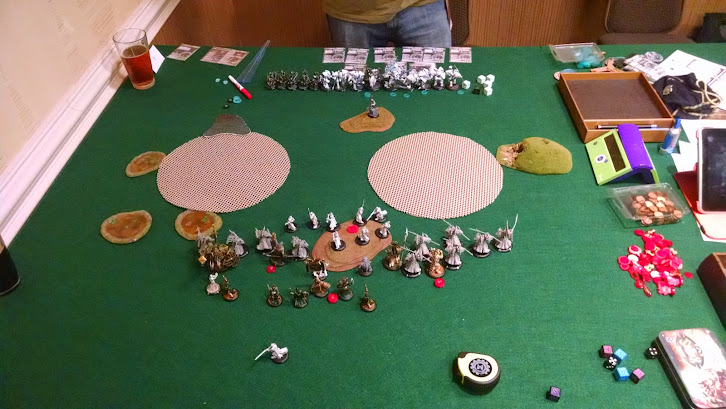