As I left the tournament Saturday, I was a little agitated. My last game has not gone well, though I’d won, and the entire day was spent tirelessly working towards what I felt was a pedestrian 2-2 showing. Both victories seemed hollow, and both defeats seemed felt self-inflicted. This isn’t to say that the person who won shouldn’t have – they did, but I could defenitly see where I made it much harder on myself than I should have. Above all I felt my main caster throughout the tournament, Zaal 2, was working uphill. I’d spent the last two months playing him, and though it was fun, I’m tired of using a caster that feels like he has one hand tied behind his back.

This revelation comes to me at a time when I’m looking deeply into what I want to play, and why. What I’ve come to see in myself, though, is impatience. It may be that I don’t want to work as hard as I used to to understand a caster, but there is a large portion of me that feels, simply, to old for this shit.

I don’t mean that in a derogative  way, simply that I’m tired of chasing perfection in a caster or unit that isn’t particularly good. Instead, I want to be able to enter a game with the confidence that if the opponent brings something massive and terrible, that I will be able to respond in kind. I honestly think that ‘Casters like Morghoul 2 and Zaal 2 are just as competent as any other caster, and that the chasms between power levels are not very vast. The time investment required in order to achieve that level of skill and familiarity with the lower tier casters, however, is simply beyond what I am willing to put in. I just don’t have the amount of free time I used to, and I want to be able to look my opponent in the eyes when I pick my caster, confident that he and I are on, roughly, the same level.

That said, I want to get going and recap a few of the games fairly swiftly, it was a fun tournament with good opponents, good times, and at the end of the day, good booze and decent food.

We got started a little later in the day than we normally do, but the TO started things up real quick and we were rolling shortly after noon. I figured we’d play destruction and I’d get awarded the same opponent round one that I had last two tournaments. Not so, it turned out. Well, the opponent part. He still started with Destruction. 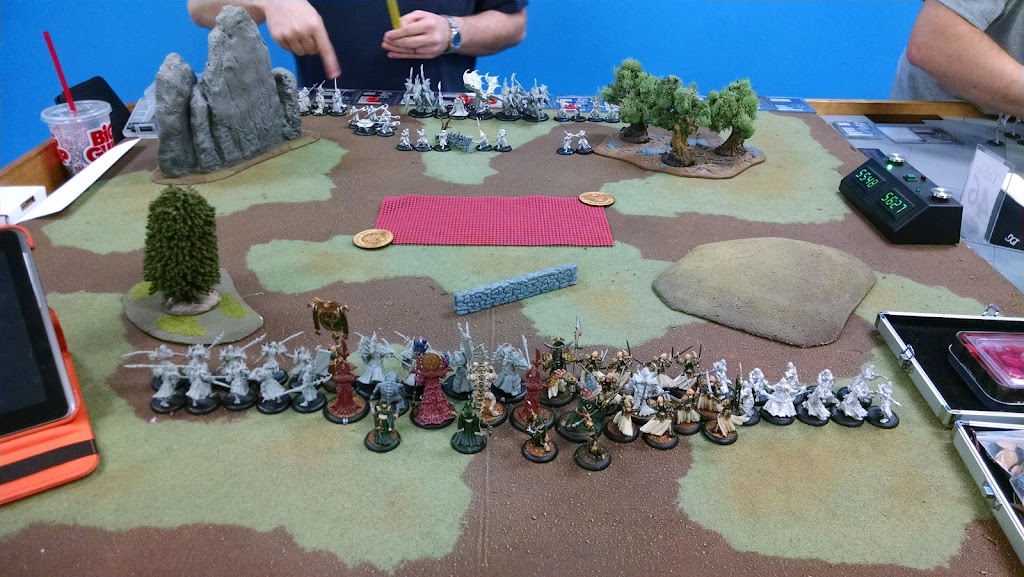 I dropped across from a friend of mine who’s been playing for quite sometime, though he’s jumped into legion from his normal Khador. Big difference. I played and lost to him round three in the tournament in February, so I was lookin’ for some payback. His lists were Lylyth 2 and Vayl 1. I figured that Rasheth would take a big ol’ pounding from Lylyth 2 if he decided to drop her, so I opted with the wave of bodies that was Zaal 2. He actually picked Vayl 1, and we had a game. He went first, and started off with a bang, dropping a fireball from a rRvagore into my lines and killing a few models with both the fire rolls and actual damage. Zaal got to be focus 10 on turn 1, which was neet. I ran into the teeth of the army, trying to position so that I didn’t loose on scenario, but also made sure to press for assassination if it came down to it.

I noticed, though, that he took a long time on his first turn, and even longer on his second. He was under half an hour after turn 2 was over, and I shifted gears. I had nearly 20 minutes up on him, and a million models. Though its not a particularly noble strategy, I was prepared to have him stall out and feed him my entire army. Thankfully, the tactic worked, and with only 1:25 seconds left on his clock at the start of turn 5, I was able to clock him out and get the first win of the day. Zaal 2: Playing not to loose. 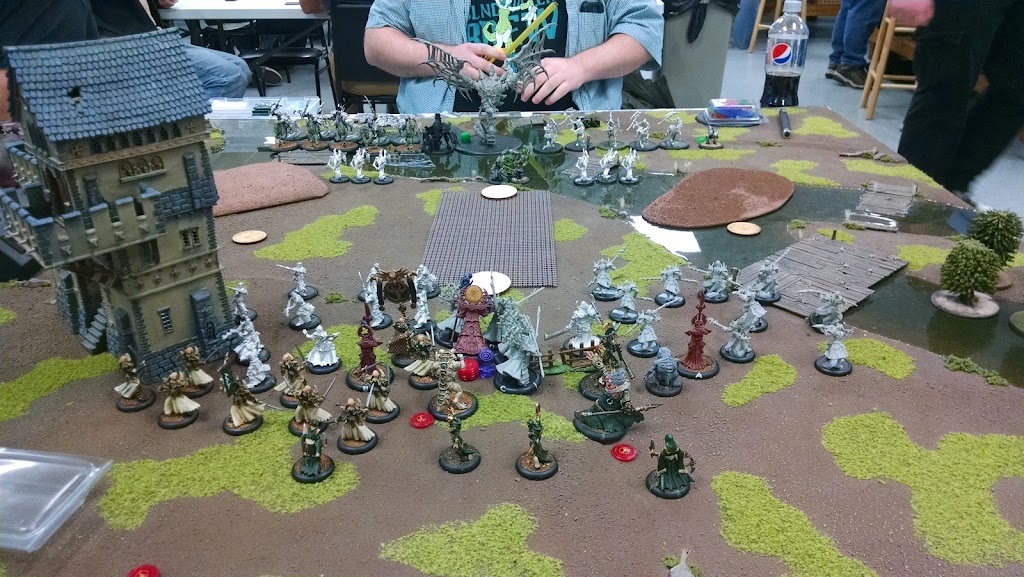 Game two was a mess. It was against Cryx, my home faction, but was also against two casters I’d not played or played against a whole lot: Denny 3 and Goreshade 3. Again, I figured that Rasheth would be dead as soon as the game started against both Goreshade and Denny, so out came Zaal 2. Thanfully, he figured I would try and next-level him and not take Zaal 2 so he picked Denny 3. Thankfully, that thought only crossed my mind for a short time before being banished – Take the caster that both can survive and denies a caster a very significant ability.

I took first turn and he gave me the side with the god awful giant building. Hell, that thing was a mess. it bottle necked up up a good bit, but really the game hinged on my opponents turn 1 feat + run into a very threatening position. I built the Zaal Bunker, but not tight enough as my opponent worked on clearing a landing zone for Denny 3so that she could charge Zaal, thanks to tall in the saddle. Thankfully for me, she was unable to clear a landing pad, and instead she camped the flag for the rest of the game, Killing everything that got even remotely close. I was able to get into her at armor 23 with Hakaar and an ancestral guardian, but didn’t do enough damage to take her out. with 9 HP left she camped the flag for another turn and begged to be killed. Unable to take advantage of my souls due to both order of activation issues and a will-times poltergeist move that pushed me out of spell range, he was able to camp the flag one more time and then blow up my objective for the win. It was a very cool game against a list I intend to run and MAN, three attacks a round with the soulhunters are a thing! 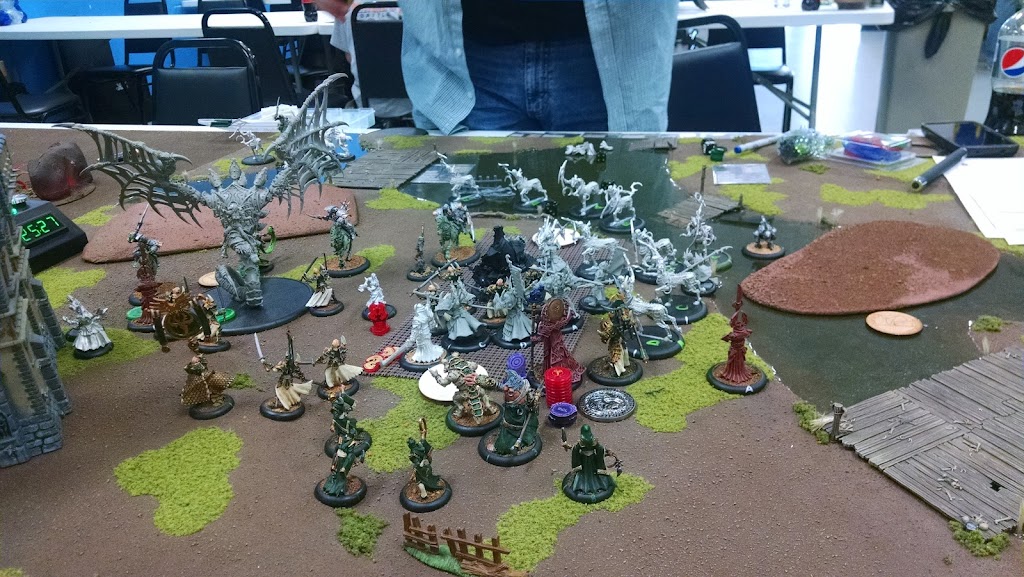 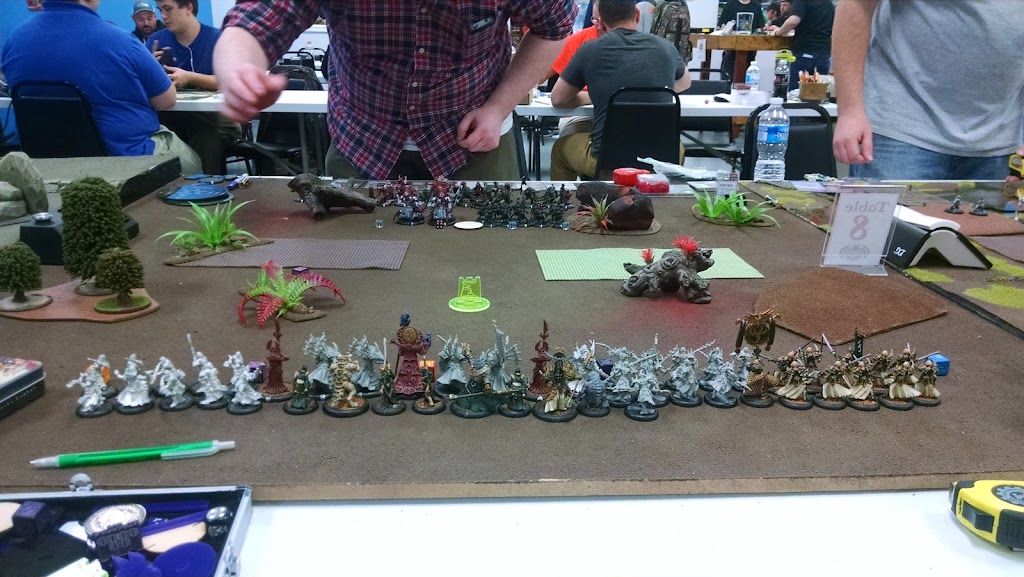 Third round I played against a good gentleman who also happened to have a birthday that day. He, too, was playing Skorne. Once more, as a recurring theme, Fatty felt like he would just get blown off the board by the twin sentinels under the opposing  Rasheth, so he stayed home. I get first turn and, once again, rush the center of the board. The Zaal bunker stays strong and is able to get up the field solidly, while the Nihilitors took one zone, and the Keltarii and Praetorian Swordsmen the other. I has scenario well in hand, I thought, when I gave up on going the long way and moved in for the assassination on Rasheth. I boosted the first sunder spirit that I landed into him, chalking up a massive damage roll. Unfortunately for me, he had a pair of fury on his caster that the large base Rashethis on concealed. Math made it very clear that I was not going to kill him, so I did what I could and camped a few fury to weather the storm. I’d left him on two HP after the run, so he was a little behid the 8 ball. However, a Charging, enraged Aradus and a unit of Gators later, I too was sitting on 2 hp, and it was my turn again. Sadly, due to stupid order of operations mistakes, I went from needing 3’s to hit Rasheth with one more attack than he had fury to needing 7’s. not my best moment, and I wasn’t able to String four sevens together for the win. So it is! 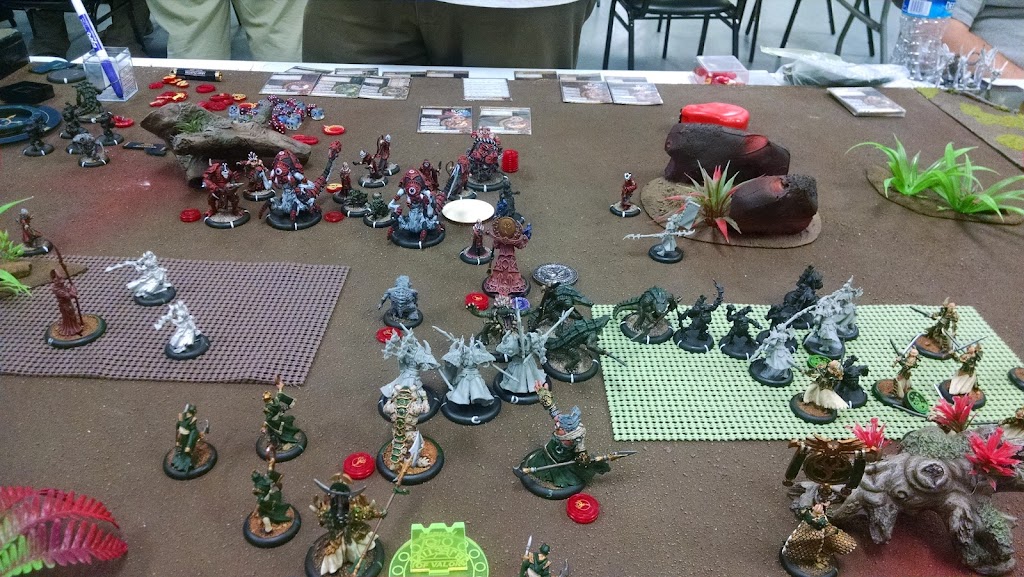 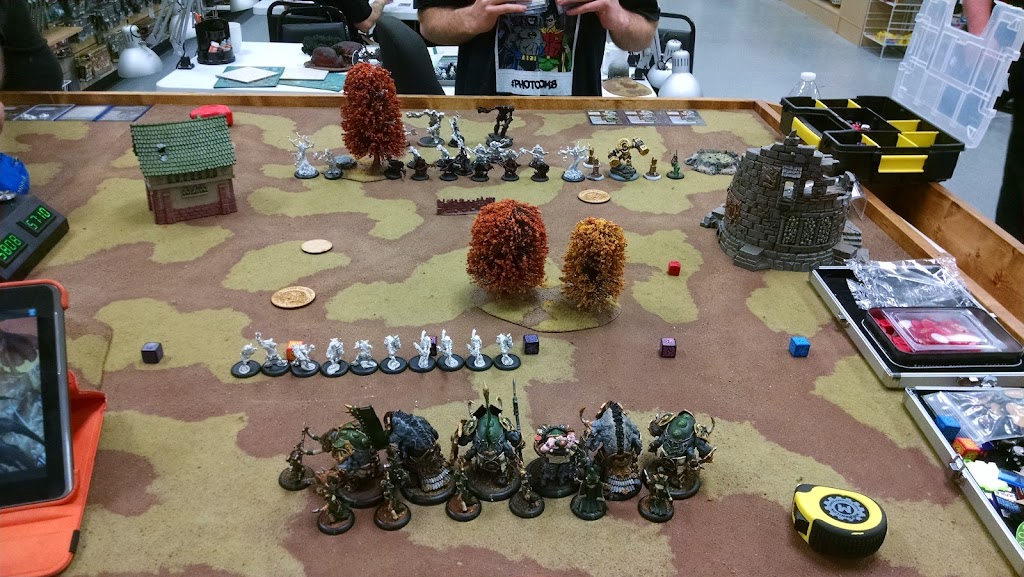 The Final game of the day was against Wake of Destruction, and I ended up with second turn, locked into Rasheht. That wasn’t so bad except for the part where I can’t cast spells at most of his army, and I can’t light any druids on fire.

Thankfully, though, He only had one real wold that could counteract me, and I managed to beat it to death after it beat the tar out of my Gladiator. and Bronzeback. After his feat set me on the backfoot, I was able to take over and get a Carnivored, beat-backing MAT 9 Bronzeback into the caster and eat him for lunch, Healing for three on Kreugers corpse.

The games were good and fun, but I really look forward to putting some truly scary, as Skorne go, Casters on the field. I really like the concept of Jason Watts Makeda 1 list, with a Mammoth and Cetratii. I mean, realy. who can’t love a good cetratii wall!